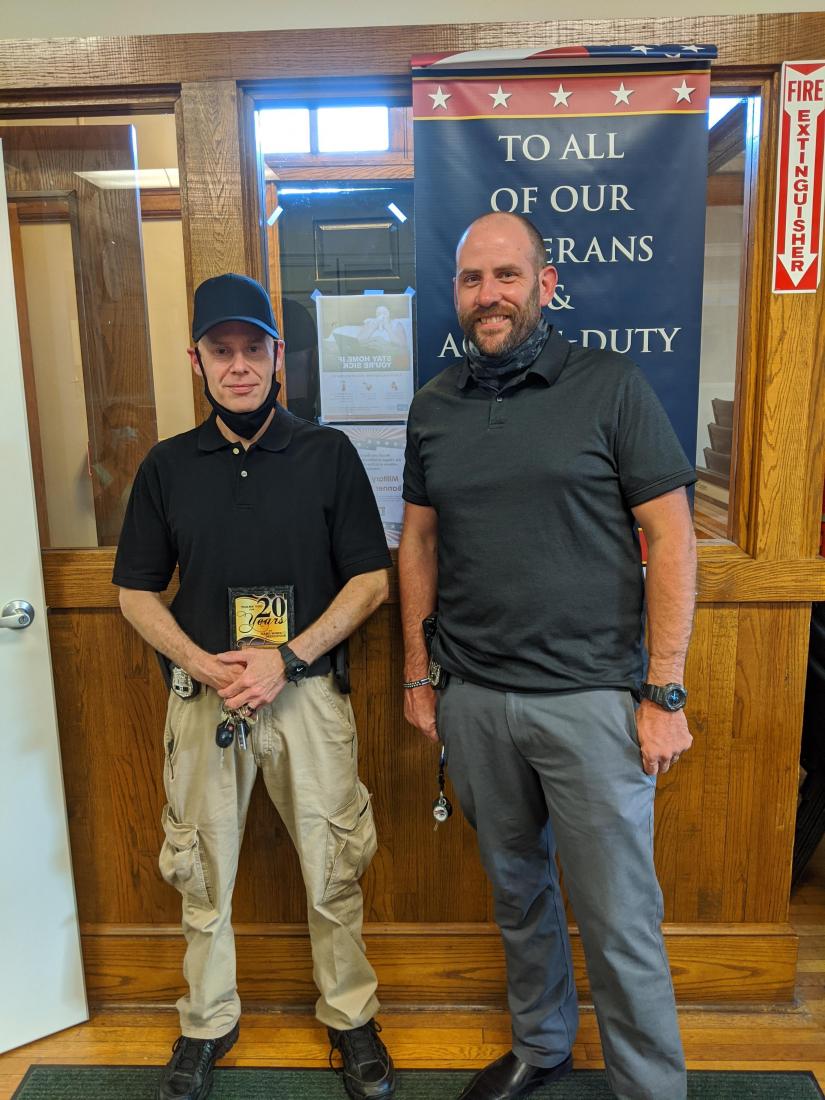 Left, Officer Bill Naughton stands with Sgt. Jared Witt, holding a plaque celebrating his 20 years of service with the Millbrook Police Department. Witt was promoted at the same Village Board meeting that Naughton was honored, on Tuesday, July 14. Photo by Sarah Witt

Brown called on Police Officer Bill Naughton to come forward; the officer was honored for 20 years of service and presented with a plaque by the village clerk. Naughton will remain on the police force and continue to serve the community.

There was no report submitted by the fire department for the month of June, but the village is expecting further information on the two-day block party planned for Tuesday and Wednesday, Sept. 8 and 9, including how to keep party-goers safe, and what the event will feature. The fire department was forced to cancel its annual parade and carnival fundraiser due to COVID-19. Plans are reportedly being made by other area fire departments for a parade around September.

The Village Board is still seeking advice on how it should charge those seeking to lease the Guertin Gym for future community events. The Washington Recreation Department has moved its quarters from the gym to Washington Town Hall. While some rec department events are held at the Town Park, most are on hold because of the pandemic.

Police Officer Jared Witt reported that his department had gone to the county warehouse to get furniture for its new office space, formerly used by the Town of Washington Recreation Department at Village Hall. The warehouse contains surplus furnishings and equipment; Witt said the department was able to obtain several items and the office is taking shape nicely.

Witt then gave his monthly report for June, which included handling several Black Lives Matter and civil liberty demonstrations, which he described as peaceful. At the end of his report, the mayor called on Witt to remain standing, and then promoted him to sergeant, presenting him with stripes for his uniform. Brown also spoke of Witt’s attention to duty, his sense of responsibility, his dedication to Millbrook and the fact that he and wife, Village Clerk Sarah Witt, are raising their family in the community and serve as an inspiration to those who live and work there.

Highway Department Superintendent Bob Collacolla reported on work done, including tree trimming, weed killing and drag box patching, as well as paving, the clearing of drainage ditches and the picking up of brush and street garbage.

A report by water operator Scott Osborn on water and sewer projects included many photos of work being done around the village and can be viewed online at www.villageofmillbrookny.com.

The board was informed that the village’s new zoning map is essentially good to go; it was described as an overlay. Brown spoke about the future Thorne Building Community Center; he said he would like the zoning process to be approved quickly. He talked about the Thorne Building needing lead and asbestos abatement; funding available through the Thorne Building for the work. Brown prefers the funding be given over to the 301(C)3 that took over the building, and that the nonprofit be responsible for those issues.

Due to the COVID-19 health crisis, the Village Board meetings can be viewed locally on Cable Channel 22 and later on the village website.