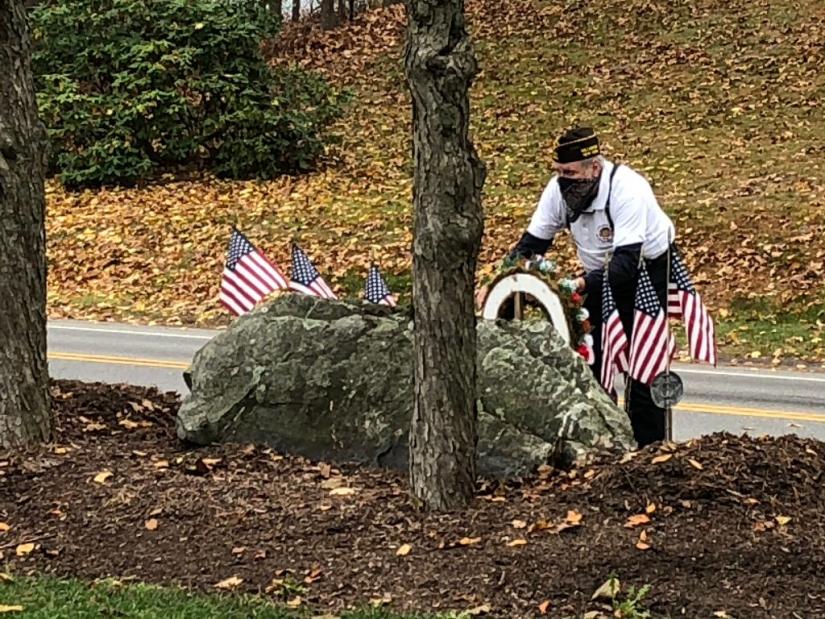 Veteran Joe Murphy, of Millbrook VFW Post 9008, laid a wreath at the Veterans Memorial at the Village Green on Veterans Day during a small service due to the COVID-19 pandemic. Photo by Judith O’Hara Balfe

Millbrook remembers veterans in the midst of a pandemic

MILLBROOK — Veterans Day in this year of COVID-19 was different, but no less sacred, than those of other years.  Overcast, threatening rain, the several veterans the local Veterans of Foreign Wars (VFW) Post 9008 set up a tent and carried on, almost as usual. The crowd was sparse, wearing masks and social distancing, but their eyes above the masks said it all, the heartfelt thanks for the sacrifices made by the soldiers the village of Millbrook and the town of Washington sent to war, some of whom never returned home.

Before the ceremony, which lasted a scant 15 minutes, the county’s Veterans Day motorcade wound its way around the turn at Franklin Avenue, passing the Village Green heading toward Route 343. County Sheriff’s Deputies, fire departments, members of the Armed Services and local municipal vehicles honored those who served by driving throughout the county in the convoy. Cars, motorcycles, firetrucks and more traveled from Poughkeepsie through Pleasant Valley, Millbrook, Pine Plains, Amenia, Millerton, Stanfordville and other parts of the Dutchess County. COVID couldn’t keep residents in the region from observing the day and paying tribute to their veterans.

Washington town Supervisor Gary Ciferri, a Vietnam War veteran, read the names VFW Post 9008 members who have passed away in the last year. A bell sounded as each name was read. A solemn march down to the Green, to the memorial, was followed with the laying of the wreath by veteran Joe Murphy, while veteran Tom Fiore held a rifle. Veteran Wayne Butler then raised the flag as a lone bugle was played. With that, the ceremony was done.

The new commander of Post 9008, Jeff Moseman, was on hand in one of his first public events since his September induction; he took over for long-time Cmdr. Lonn Moore. Moseman previously served two years as vice commander.

“Despite the pandemic it’s important that we continue the tradition of celebrating Veterans Day this year and every year as a way to honor the young men and women who left home to serve their country,” said Moseman.

Asked about his own military service, he replied, “service, I did a total of 22 years. I served on active duty with the United States Navy from 1983 to 87, where I was stationed aboard the Amphibious Assault Carrier U.S.S. Inchon. I deployed three times to the Middle East as a member of the Multi-National Peacekeeping Forces in Beirut, Lebanon.”

After being honorably discharged he continued his military service with the Air National Guard based out of Stewart Air Base in Newburgh.

As with most other entities, this has been a rough year for Post 9008. Due to COVID, the usual means of raising money haven’t been available; the VFW has not been able to do any public fundraising, so few 50/50 tickets were sold as it did not have a kiosk at the farmers market or other venues as usual, and some of the events where it would typically sell its famous sausage and peppers were not held.

Most of the VFW’s money goes to purchase the metal plates used to hold the American flags displayed at local ceremonies, for which it does accept donations. For more information, go to its Facebook page.