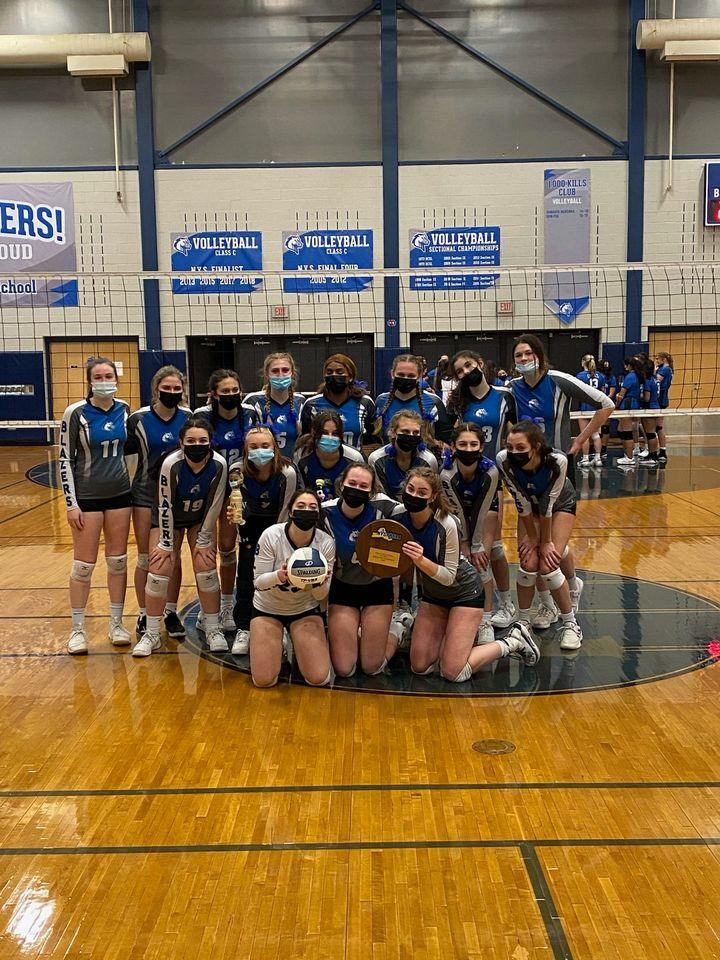 The Millbrook High School Blazers, here with their coach and other high school staff, won the Girls Volleyball Regional Championship on Saturday, Nov. 13, at home. They lost the state title on Sunday, Nov. 21. Photo by Coach Shawn Stoliker

MILLBROOK — Expectations were high as the Millbrook High School Blazers Girls Volleyball team started out for the state finals at the Glens Falls Civic Center on Saturday and Sunday, Nov. 20 and 21.

After all, Coach Shawn Stoliker was ecstatic on Saturday, Nov. 13, when the team became Regional Champions following a home game against Dobbs Ferry, when storm clouds gathered outside but inside all was sunny as the final scores were 25-14, 25-23 and 25-15, all in favor of Millbrook.

On Nov. 21, Stoliker, still feeling the glow of the regional win, spoke proudly of that game.

“We were led by an amazing offensive effort led by our setter Marisa Markou, who finished with 31 assists. Hitters Julia Stoliker had 15 kills, Bella Darnell, 12 kills and Natalie Fox, with six kills, led the way offensively. We are now 15-1 overall and ranked second in the state for Class C.  Next [week] we play in the state semi-finals.”

There were more than enough fans to cheer them on at the regional match; the school parking lot was full, and the cheers were loud and long.

The state finals were played at the Glens Falls Civic Center in Glens Falls.

The team played in the pool play on Saturday, Nov. 20, where they played in a round robin style tournament playing all three competing teams. They played each team in two individual games. The two teams with the best record of the day then moved on to play Sunday at 2 p.m. for the state championship title. Unfortunately, the Blazers lost to Portville with a score of 3-1. The loss was heartbreaking, but everyone in the community is very proud of what the Millbrook players have accomplished. Overall it has been an exciting season for the team and for Stoliker.

The state finals in Glens Falls were the final step to the State Championship. They might not have won, but they came very close, and they didn’t lose to just anyone. The Portsmouth team has won the State title five  times over the past 10 years.

As the saying goes, “Better luck next year," but this year, the Blazers were certainly amazing.