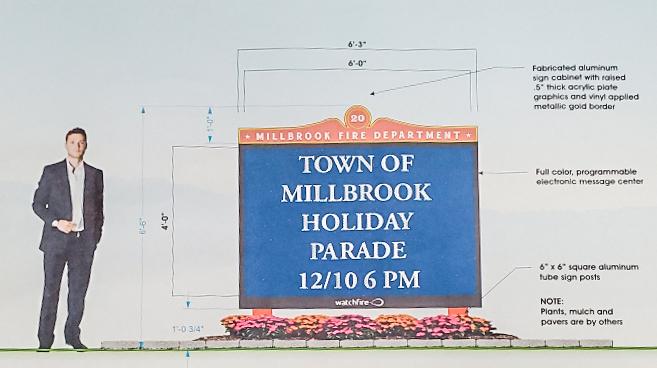 Above is a close replica of the sign that Millbrook Engine Hook & Ladder Co. #1 would like to purchase from its own budget and install to post community emergency service messages outside of the Millbrook firehouse at 20 Front St. Photo submitted

MILLBROOK — During just two days in August,  the 9th and the 10th, the village of Millbrook went from being a peaceful little village to one embroiled in controversy. And it was all due to a sign.

On Tuesday night, Aug. 9, Watchfire Signs brought a mobile sign on a truck into the village to illustrate what the sign the Millbrook Hook & Ladder Co. #1 wants to purchase for its firehouse at 20 Front St. would look like.

The new digital sign has caused concern among those who fear it would be an eyesore. The fire department argues it needs to replace its current sign in front of the firehouse, which is not just old but is falling apart. Notices need to be manually inserted in the sign. Because the sign is so damaged, the letters don’t stay in place and the sign is ineffective, said fire department representatives.

The current sign is 6-feet high and 6-feet wide, black and white, and it’s used to disseminate important information about emergencies and other vital public information as well as community events. It’s located at the corner of Front Street and Washington Avenue.

Although Tuesday night was quite hot, a good number of residents appeared to assess the sign. Mayor Tim Collopy taped the event and put it online, at www.villageofmillbrookny.com, the next day for those who weren’t able to attend. That photo may still be seen online.

A representative from the sign company gave a demonstration on Tuesday and answered questions. Costs were also discussed, about the $25,000 the fire department would pay from its own coffers to purchase the sign and the cost to maintain the sign. The fire department stressed it’s not asking the town, the village or the taxpayers to foot the bill for any costs.

The Millbrook Fire Department (MFD) does fundraise to support its operations and maintenance, and expressed its gratitude to the many people in the community who donate.

MFD President Matt Rochfort said the Hook & Ladder Co. didn’t want a sign with bright colors or flashing lights. The new sign will not be disruptive to the character of the village, but very similar to the sign it’s replacing, he said. It will be the same size, it will be black and white, and the lights will be able to be dimmed or completely shut off at night.

The information may be entered digitally, and quickly, and changed frequently. The truck from Watchfire Signs was in Millbrook on Tuesday for an hour. Some residents said they liked it, some didn’t. Most comments were saved for the Village Board meeting’s public comment section the following  night, Wednesday, Aug. 10.

The mayor and three of the board’s four trustees were present: Mike Herzog, Vickie Contino and Peter Doro. Several residents and MFD personnel were there also.

Rochfort explained the old sign looked battered and functioned poorly, and said the fire department will follow all codes and suggestions from the village in order to get a new sign approved.

Resident Heather LaVarnway had safety concerns, and said the new sign could distract drivers, drawing their attention from the road if there are flashing or moving messages.

Rochfort noted that an e-mail sent throughout the community sharing images of large and garish signs from a nearby town was very misleading, as it had nothing to do with the sign the MFD wants.

Resident Leah Cornell also said she was disturbed, as she had been approached by people asking her to speak on their behalf because they were afraid of the repercussions of making complaints themselves. Several people scoffed at her statement, especially the firefighters who were in the room.

Cornell made it clear that just because some residents do not want an electronic sign does not in any way diminish their respect or gratitude for the fire department itself.

Others at the meeting said they were against the new sign because they felt it was out of character for the village. Many said Millbrook is known for its quaintness, its ambience and its charm, and fear the sign’s out of character.

One comment was made that the only lit sign in the community at the moment is the scoreboard at the high school athletic field. There is a gas station on Route 44 that also has a lighted sign. The mayor later clarified.

“There are no electronic signs in Millbrook,” he said, period. The current code allows signs to be lit, but they may not be electronic.

Former Mayor Andrew Ciferri said he’s in favor of the new digital sign. The MFD is charged with protecting the village, he said, and the sign would aid them. He added it likely wouldn’t impact the environment negatively, either.

Trustee Doro read an e-mail from Town of Washington Councilman Bob Audia and his wife Sherry, who are in favor of the new information board. They spoke of how much the fire department has done for the town and village through the years.

Resident Mike Flanagan said for all the fire and rescue squads do, they should be respected and allowed to get the sign they want.

Several MFD personnel said they feel badly that a simple sign  has become such a big controversy.

Resident Kara Grainger, who is a mother, a teacher and both vice president and secretary of the MFD, spoke of the training, the meetings and the emergencies the volunteers tend to.

“We’re all volunteers, we all have day jobs,” she said, noting while she maintains the website, it’s not always accurate due to restrictions on Facebook and social media. The new sign would help keep the community updated with current information.

While most of the people present leaned if favor of a vote being taken that night as the board had a full quorum, the mayor opted to wait until all trustees were present. The vote on whether to approve the sign was scheduled for the meeting on Thursday, Sept. 8.