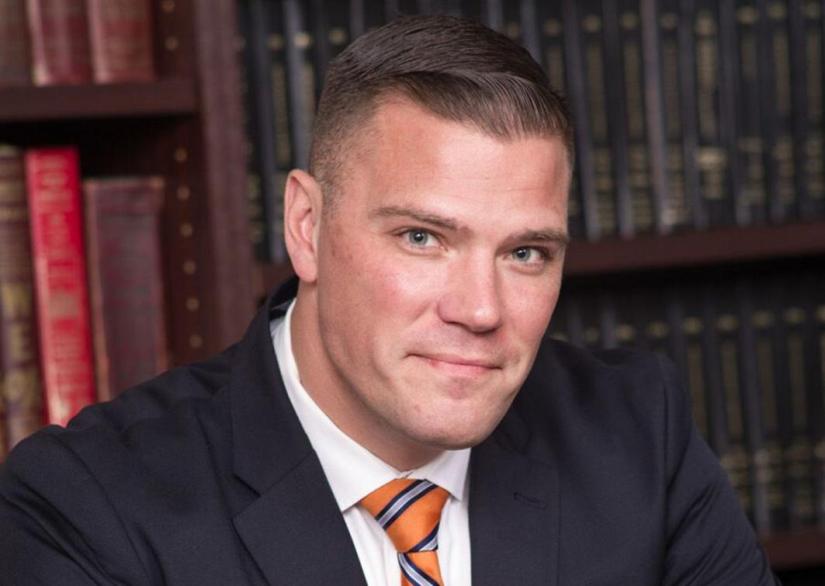 Millbrook attorney Kyle Van De Water announced on Monday, July 12, that he will be making his second bid for Congress in 2022, running against incumbent U.S. Rep. Antonio Delgado (D-NY-19), though the districts may look different by the time the November General Elections roll around thanks to New York losing a congressional seat as a result of the 2020 Census. Photo submitted

MILLBROOK — Republican Kyle Van de Water announced on Monday, July 12, that he will take another stab at unseating U.S. Rep. Antonio Delgado (D-NY-19) from Congress come 2022. The Millbrook attorney ran unsuccessfully against the Congressman from Rhinebeck in 2020 but feels that for a first-time effort he made a good showing, with the final vote count showing Delgado with 192,200 votes to Van De Water’s 151,475 votes. Considering that Delgado outspent Van De Water 25 to 1, the former Millbrook Village Board member said he believes his chances of a victory the second time around are good.

In announcing his candidacy, Van De Water said in a statement, “Today, I am proud to announce that I will be running for Congress in 2022. While I don’t yet know how the district will look, I do know that I care far too much about this district to sit on the sidelines, no matter the odds.

“It would be politically expedient to wait and see how the redistricting process shapes the district, but I am not a politician,” he added. “I am not doing this for myself, I am doing this for the people of NY-19 and perhaps some from NY-18 or NY-20 as well.”

Delgado and Van De Water battled each other in the race for the 19th Congressional District seat a year ago. District 19 includes most of Dutchess County and parts of Rensselaer, Montgomery and Broome Counties, as well as all of Ulster, Greene, Columbia, Sullivan, Delaware, Otsego and Schoharie Counties.

Following the 2020 Census, however, New York State lost a congressional district, going from 27 to 26, and because of that, boundaries will change. In fact, according to estimates from the U.S. Census Bureau, New York was shy by 89 Census responses in the 2020, meaning if 89 additional New York households had responded to the count, the state could have kept that 27th seat. According to the Census, the population change was 4.09%, resulting in an apportionment change of negative one.

With Delgado living in Rhinebeck and Van De Water living in Millbrook, there is a chance they may not end up in the same district, but at this point, nothing is certain.

Van De Water did mention in his statement that for a time, the 2020 race was too close to call, and on Election Day, the margin was miniscule.

“Why?” he asked, “because we had the better message. With your help, I will have the resources this cycle to deliver that message to those I could not personally meet in the last election. I am excited to demonstrate that I am the right person for the job.”

Van De Water, his wife and children live in Millbrook; he is an associate at Corbally, Gartland and Rappleyea, L.L.P., in Poughkeepsie. He is also a veteran who served eight years in active duty with the U.S. Army JAG Corps, attaining the rank of major when he was deployed to Afghanistan. He served another three years in the U.S. Army Reserve.

In addition to serving on the Village Board, he also volunteered on the Town of Washington Recreation Commission and on the Millbrook Business Association.

Delgado is also an attorney, and is serving his second term in the House of Representatives. He was elected as part of the progressive Blue Wave that took hold of Washington in 2020.