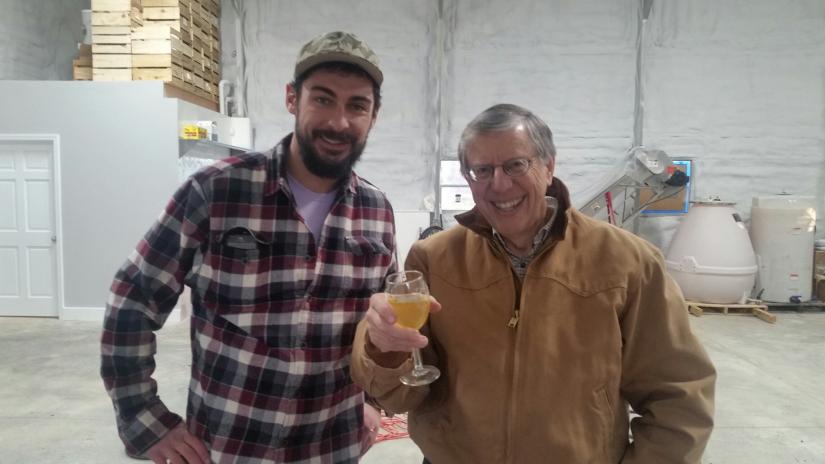 Local spirits the perfect remedy for a cold winter’s night

MILLBROOK — The Millbrook community is known for its pastoral scenery, horse and dairy farms, fresh produce and local wines. But one well-kept secret is Shady Knoll Orchards & Distillery, LLC, which produces apple brandy, a brandy and cider mixture called Pommeau and a fine rye whiskey.

The distillery was a dream that was a long time coming.  Rick Kneipper, a corporate lawyer, decided to buy a farm back in 1980, primarily as a vacation home for his family. But a fondness for Calvados, an apple brandy made in Normandy,  planted the seed — literally. Between then and 2016 when he started the business, his family lived in New York, Florida, Wisconsin and then settled in Texas.

Kneipper had spent 15 years in technology and health services, but now he’s the CEO and manager of Shady Knoll Orchards & Distillery. He decided at one point the time was right to follow the family tradition (his grandfather was a dairy farmer) and decided to  grow apples at the farm, which was originally settled in the late 1700s.

Having dreamed about taking the leap for years, he had already visited orchards and distilleries in the U.S. and around the world, learning the basics of growing, distilling and production. His enthusiasm rubbed off on his son-in-law, Andrew Richards, so when the time came to get down to business, he had a willing and ready manager. They broke ground on June 5, 2015, the same day Richards made the farm his home.

“Shady Knoll Orchards & Distillery is a unique breed — a family farm distillery where Andrew Richards, my son-in-law, and I raise the apples and rye used to make our handcrafted spirits,” Kneipper said.

Rightfully proud, he added, “We do 100% of all processing, fermenting, distilling, barrel-aging and bottling ourselves.  We grow over 120 varieties of apples that we use to make our apple brandy and Pommeau.”

The distillery boasts a charming tasting house, and pre-COVID it held tours and tastings, one of Kneipper’s favorite things to do as he likes interacting with visitors and explaining the entire process. It may seem a charmed existence, but there is plenty of hard work attached to it.

August through November the apples are picked and packed; they sit until June, when they are pressed into hard cider. Although the work could be shouldered by many, each year it is done by only Kneipper, Richards and one other who is hired through Grace Church. The trees are small, Kneipper assured this reporter, just 6 to 7 feet tall.

The bottling process takes place in December; and the whiskey is made from winter to May. The still doesn’t operate during the summer, which is a time for weeding, mowing and putting the 1964 vintage harvester to use.

One field is given over to a friend and neighbor, Clear View Farm, while two other fields are used as a pasture for black Angus cows belonging  to another friend, Ed Kading.  The leftover mash from the apples after they are pressed is given to the cows, who “come running” for it, said Richards.

The spirits are sold in Texas and New York by roughly 20 retailers in each state. Locally, Village Wine and Spirits in Millbrook carries all three items, and according to a worker in the shop, Brian Spaeth, all are delicious. The Pommeau, a mixture of apple cider and apple brandy,  has only 17% alcohol and is slightly sweeter than the brandy. The apple brandy is 80% proof (40% alcohol) and is aromatic. Spaeth said it’s a great drink to sip in front of a fire on a winter’s night. The whiskey he described as “very smooth.”

All are carefully prepared, perfectly aged, stored and made in small batches. The other grains used to make the whiskey, corn and barley, are locally grown and harvested from nearby farms.

Kneipper said he’s been using extra down-time since the COVID pandemic to experiment, perfect and enhance their products.

“Shady Knoll is starting to show spirit drinkers that raising our own crops on our farm creates unique Hudson Valley terroir in our spirits, and local terroir is starting to be recognized as just as important in spirits as it is in wines,” he said.

Shady Knoll Orchards & Distillery is currently open for tours and tastings, by appointment only, due to the pandemic.

The distillery is hoping that post COVID, it will become a favorite destination for both locals and visitors as there is so much to see: the distillery, the granary, a French alembic Charente’s pot still, a silo and a variety of other distilling equipment, not to mention the tasting house to savor the fresh apples, and perhaps some smooth whiskey as well. Located at 27 Brush Hill Road, go to www.shadyknolldistillery.com for more information.