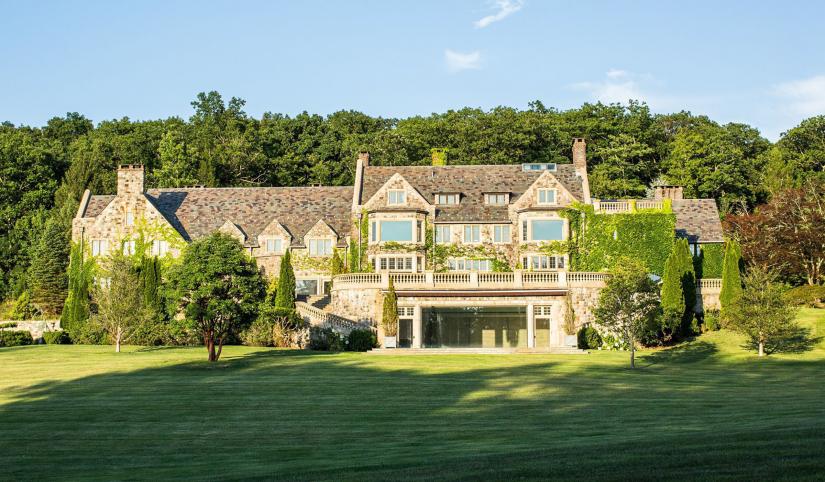 This photo shows Migdale Castle, a palatial home Roswell Miller Jr. built in 1927 for his wife, Margaret Carnegie Miller, daughter of magnate Andrew Carnegie, which was modeled after the Carnegie’s Skibo Castle in Scotland. If plans submitted by celebrity New York City restaurateur Will Guidara’s Second Mountain project come to fruition, this 34,500 square foot edifice will become the center of a luxury resort and spa with condos, two restaurants and a number of other amenities. Photo courtesy of applicant

From Manhattan to Millbrook

WASHINGTON — With a long, cold winter, during the pandemic there hasn’t been much to talk about in the town of Washington — until now. On Thursday, Feb. 2, the Town of Washington Planning Board held a meeting about a proposed project presented by famed restaurateur Will Guidara, who outlined plans for Second Mountain, a project for the site of Migdale Castle, at 3872  Route 44.

Once word got out in the community about the project, conversation blew up — everywhere — on social media, via e-mail, on the telephone, and, of course, in person. Someone posted a mention about the Migdale project online and within two hours there were nearly 200 comments, a mix of pros and cons.

Whispers started in mid-January, followed by a concrete presentation to the Town Board on Feb. 25 at a special meeting, when Guidara outlined what he would like to do with Migdale and the adjoining  land, roughly 350 acres.

Built in 1927, Migdale Castle in the town of Washington was built by Roswell Miller Jr. for his wife, Margaret Carnegie Miller, daughter of Andrew Carnegie. The house was modeled after the Carnegie’s Skibo Castle in Scotland, and the name was a play on her nickname, Midge. It’s four stories high, with all the amenities great wealth can provide; when the couple divorced in 1953, Miller remained there until his death in 1983.

In 2000, the Wildenstein family, who made their billions in the arts, discovered  the Migdale estate in terrible disrepair, and bought it under their business’ name of Everest Polo Stables for $5.2 million, spending $50 million in renovations and then $14 million to acquire another 175 acres. In 2020, they offered it for sale at $14 million with 200 acres, or $20 million with an extra 150 acres.

In early 2020, Guidara, a well-known restaurateur based in New York City (who has won the James Beard Award for Best Service in America and the 50 Best Award for Best Hospitality in the World), dissolved his partnership with chef Daniel Humm. The two men had co-founded Make it Nice Hospitality, a premier restaurant group including the three Michelin starred and number-one rated restaurant in the world, Eleven Madison Park, NoMad (NYC, LA, LV) and Made Nice. Guidara and his wife went to their home in Kingston, and while there, decided they didn’t want to return to the city. Instead, he envisioned a different future for them and their unborn baby. While looking for places carry out their next phase of life, he said he fell in love with Millbrook, and dreamed up plans for Second Mountain.

In a presentation to the Town of Washington Planning Board on Tuesday, Feb. 2, Guidara shared his vision for Second Mountain. It will be modeled after the world’s great resort destinations as a world-class getaway in the Hudson Valley. He sees it being a top resort, just a short drive from New York City; he described it as “casual but luxurious.”

The central castle building and other buildings can accommodate 27 rooms and suites; new cabins and cottages will add 39 rooms and there will be 11 luxury seasonal tents. The plan includes condos. Then 23 rental pool units, a greenhouse, a spa, tennis courts and an indoor pool will also be added, along with hiking trails. Of course, there will be restaurants, two, to be exact (one formal and one casual). The project will be done incrementally.

One problem is that the area where Migdale is located is currently zoned RR-10, or Rural Residential, so Guidara and his attorneys are petitioning for a zoning amendment and for a Zoning Overlay District designation to be approved for the property.

At a Feb. 11 Town Board meeting where the Migdale project was discussed briefly, one agenda item was a request from Guidara’s attorney, Neil Wilson of Mackey, Butts & Wise, LLP, for a special meeting to be held to introduce the development’s overall concept plan  and to commence the mandated State Environmental Quality Review Act (SEQRA) process, to name the Town Board as the lead agency in the project review. That was done.

The Town Board announced a special Feb. 25 daytime meeting in multiple places, including this newspaper; Town Clerk Mary Alex also published the announcement and the link on the town website. The meeting was held on via Zoom.

At that meeting, Guidara gave an impassioned account of who he is and why he wants permission to carry out his plans. More than 200 people Zoomed in, mid-day, mid-week, showing just how important this project is to the town and the village.

Guidara addressed some of  the questions utmost in people’s minds; and yes, he has plans to install more wells to provide water and he also has a plan for sewage treatment. Both entrances to the property will be off of Route 44, addressing the question of how much the project will impact traffic and if other roads will be impacted.

The applicant also mentioned that he plans to use local workers, local services, local materials; he even mentioned several businesses by name. He said that he will also use locally grown and sourced food, farm products and beverages at his restaurants, so yes, local businesses will reap some benefits.

When the resort is up and running, he said it will provide about 150 jobs for local workers. He said he will also try to create relationships with other destinations and send his guests to local wineries and other sites in the region like Innisfree Garden, Orvis Sandanona and Dia:Beacon, just to name a few.

A number of people who commented on the proposal expressed fears that such a big undertaking could change the face of Millbrook forever, some said they are worried about the impact it could have on the local infrastructure while others said they think it could damage local businesses. Yet there were a few who supported the plan and said the project just might turn out to help prop up the local economy and boost area businesses, as well as create more housing and increase the tax base.

Town Supervisor Gary Ciferri remarked that the application is relatively new, and that contrary to some thinking, nothing is being pushed through or done in secret.

“The Town Board and I  back this project 100%,” he said. “Millbrook needs it, the town needs it. It will bring jobs, it will bring tax  revenue, sales tax, hotel tax and it will bring people into the village, helping businesses and the community. We will do everything we can to support him. When it gets to the Planning Board, everyone will have a chance to comment.”

Resident Al Yoon questioned if the project fits into the town’s master plan, which recommends Millbrook remain rural. He said maintaining that perception is key.

“Will [Guidara’s] idea of bucolic charm may be very different than the community’s,” said Yoon. “Environmental and traffic impact will be extremely important. The idea of preserving an historic property for public use isn’t a bad thing, it’s the scope of the project that’s disturbing.”

“I was very surprised the Town Board called a special noontime meeting in between its regular monthly board meetings and declared itself lead agency for the Janet’s Farm [Migdale] developer’s request to change the town zoning code to allow him to build a commercial resort on 352 acres in a part of the town that is zoned for 10 acre lots and above to be used for low density residential or agricultural related purposes,” said resident Howard Schuman. “During the formation of our present comprehensive plan, the community was mailed a list of 66 survey questions to answer, based on what they thought was important for the town now and in the future. One of the questions asked about expanding land for commercial uses in the town. Only 7% of the responders thought that was a good idea.

“Changing our zoning code to create a new, large commercial area in the town is a very big deal, and could have far-reaching unforeseen, perhaps undesired, consequences,” he added. “It seems like it should only be done at such time as the community at large expresses an overwhelming demand to allow a substantive change of this nature to be made. And that has not happened yet.”