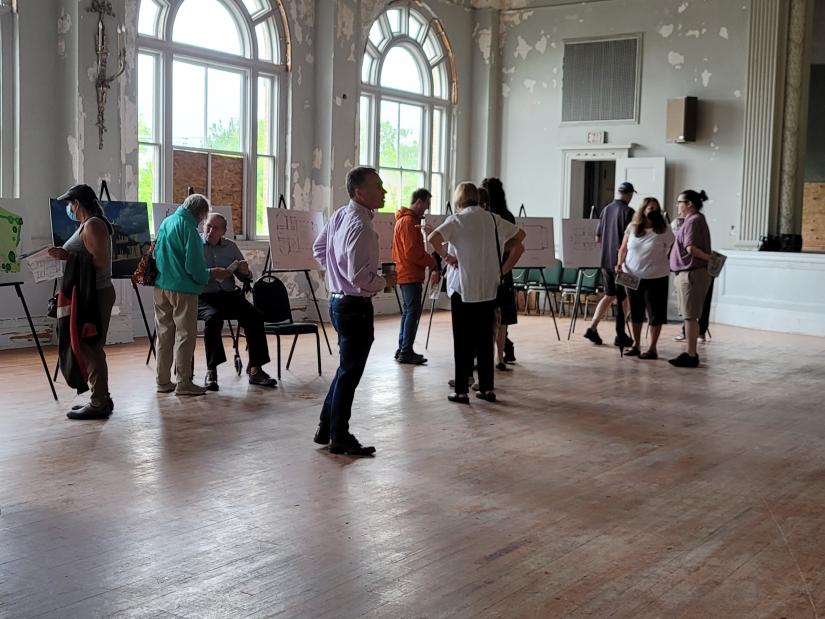 Saturday, May 28, found roughly 350 community members at the Thorne Building Community Center to see the changes taking place there. Note the large arched windows that let in an abundance of natural lighting. Easels held renderings of plans by Sloan Architects, hired by the Millbrook Community Partnership 501(c)3 nonprofit to do the renovations. Photo by Judith O'Hara Balfe

MILLBROOK — The day may have been rainy, but the outlook was sunny as more than 350 community members toured the future Thorne Building Community Center (TBCC) on Saturday, May 28, some for the first time.

George Whalen, Oakeigh Thorne and others from the Millbrook Community Partnership (MCP), the 501(c)3 nonprofit behind the years-long project spoke of how much transforming the historic one-time high school means to the them, as did the response to the day’s event.

“The MCP, along with our many volunteers who assisted in the Open House Day, are delighted with the huge turnout, positive suggestions, and overwhelming enthusiasm received from the community for the TBCC. We hope the community will continue to stay updated by visiting our website: www.thornebuilding.org.”

The building, which was given to the newly incorporated village of Millbrook in 1895, has been in a serious state of disrepair for many years. After no longer being used for educational purposes after 1962, it served as various venues over several years, but eventually was left to lay dormant.

During Saturday’s tour, its stately elegance was evident as its stripped-down brick walls were bare, the asbestos recently removed. It ‘s not hard to envision a finished project, which was what the tour was all about.

The first floor has an auditorium and stage that will allow for theater events and could also accommodate social engagements like weddings. There are plans for possibly an art gallery and some community work spaces too. Many large windows allow an abundance of natural light.

Plans for the second floor include possibly a dance studio, classrooms, a room for seminars and kitchen/catering space. S

The third floor might be designated for office space, and the basement offers many possibilities, including a culinary center and kitchen, recording studio, technology center and more.

Many of those who attended were back for the first time since high school at the Open House. Others, such as Lois Marder, have been back more recently for events like antique shows; she praised the MCP’s progress.

“After all these years it is delightful to see the elegant interior of this building and listen to all the stories that people recall,” she said.

Resident Irene Wing said she was just glad the building would be put to good use.

“I’m glad it will be returned to its former glory,” she said.

Resident John Kading celebrated his 94th birthday on Saturday. He recalled going to school at the Thorne Building and was glad to see old friends and former classmates on the tour to share memories with of their high school days in those very halls.

Whalen, Justice Betsy Shequine, Millbrook Mayor Tim Collopy and Patsy Pollack were among the many who volunteered to greet and guide the visitors on tours of the first floor. There were 14 volunteers in all, and the hundreds who showed up seemed to be impressed and delighted a the renovations thus far.