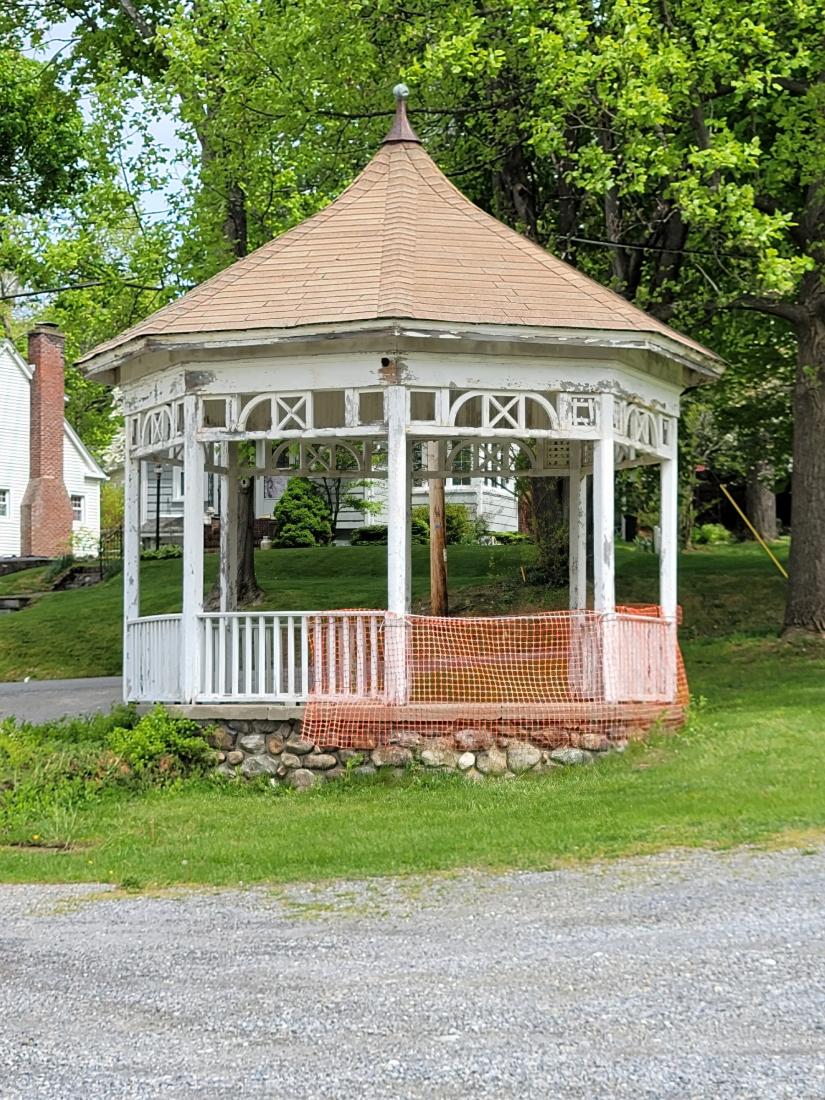 The gazebo shown above is owned by the Millbrook Central School District, and is in dire need of repairs. The district is currently deciding whether to repair it or demolish it. One group, the FRIENDS of the Gazebo, is fighting to save the  historical structure on Elm Drive. Photo by Judith O'Hara Balfe

Can Elm Drive Gazebo be saved? FRIENDS group believes it can

MILLBROOK — Most everyone loves the quaintness and beauty of villages like Millbrook. Certainly visitors and residents in the Harlem Valley  appreciate the charming community’s local history, quaint shopping district and continuity.

The popular garden gazebo located on Elm Drive is one of the structures that people who visit the tennis court often look for; tourists also enjoy it when they drive along Elm Drive viewing village sights. Many residents say they, too, enjoy the gazebo’s history, although the structure is presently too damaged to be used.

For a long period, its ownership was in question. Residents wondered if it belonged to the Village of Millbrook or the Millbrook Central School District (MCSD).

A surveyor confirmed that it does belong to the MCSD, and its fate now rests in the district’s hands. While the MCSD seems to understand how important it is to the community, it’s also noted how costly the repairs will be.

A FRIENDS of the Gazebo group has been hard at work, headed by resident Ashley Lempka. On Tuesday, Oct. 19, some members of the group attended the MCSD Board of Education (BOE) meeting. They informed the BOE the group was formed to preserve and restore the gazebo. Since forming, the FRIENDS have been working to figure out how to best accomplish that.

At that meeting, the FRIENDS discovered the BOE had sent out around 7,000 post cards with a link to a survey on the school district’s website. About 188 replies were returned. The answers showed that 36% of the respondents would like to see the gazebo repaired or renovated, while 8%  would prefer it to be demolished.

The BOE appointed two of its members to work with the FRIENDS group. Lempka, following the meeting, said she felt encouraged.

“They seemed very willing to work with the group and help us reach our goal,” she said.

She and a few FRIENDS members attended another BOE meeting on Oct. 25 with the two BOE liaisons via Zoom, and again on Nov. 2. Questions abounded on both sides, concerning the school board sharing information with the FRIENDS about a quote they obtained to do the repairs.

Some questions included if the FRIENDS can get their own quote for the repair work (since the district has to pay for it); if they have any money for the project; if they are willing to let the MCSD maintain control over the project; and if the MCSD’s insurance would cover the FRIENDS group if it initiated the repair project?

It was also asked if Village Building Inspector Ken McLaughlin would inspect the gazebo? The BOE asked MCSD Director of Technology and Data Services Elliott Garcia to get in touch with McLaughlin.

The FRIENDS also asked if the MCSD be willing to donate any money raised toward the possible demolition of the gazebo, which was $7,800 at the time of the meeting, or toward repairs. The district said it would.

The BOE discussed if it would be able to offer tax deductible write-offs to those who donate to the repair fund?

Other questions that were raised included asking about what might be involved in subdividing the property the gazebo is on? There has been some talk of the gazebo property being subdivided and going into village hands. The land is actually on the site of Elm Drive Elementary School.

The BOE was asked if it might consider approaching either the Dyson Foundation and/or the Tribute Garden for financial assistance. It was suggested that the FRIENDS could also apply to the Millbrook Educational Foundation for funds.

On Nov. 9 the FRIENDS met at the Millbrook Library. They discussed possibly purchasing the gazebo and the immediate grounds on which it stands, or to lease it from the MCSD for 99 years. It also discussed becoming a formal 501(C)3 nonprofit.

The FRIENDS said time is of the essence, but acknowledged the wheels of progress often turn slowly. It has ideas to keep the ball rolling, one of which is to distribute flyers and let residents know about the group and its goals.

There is talk of having a Gazebo Float in the Parade of Lights in Millbrook on Friday, Dec. 3. Lempka would also like to fill a few positions in the FRIENDS group: treasurer, secretary and co-secretary.

To learn more about the FRIENDS and how to join the group, go to www.millbrookgazebo.com.