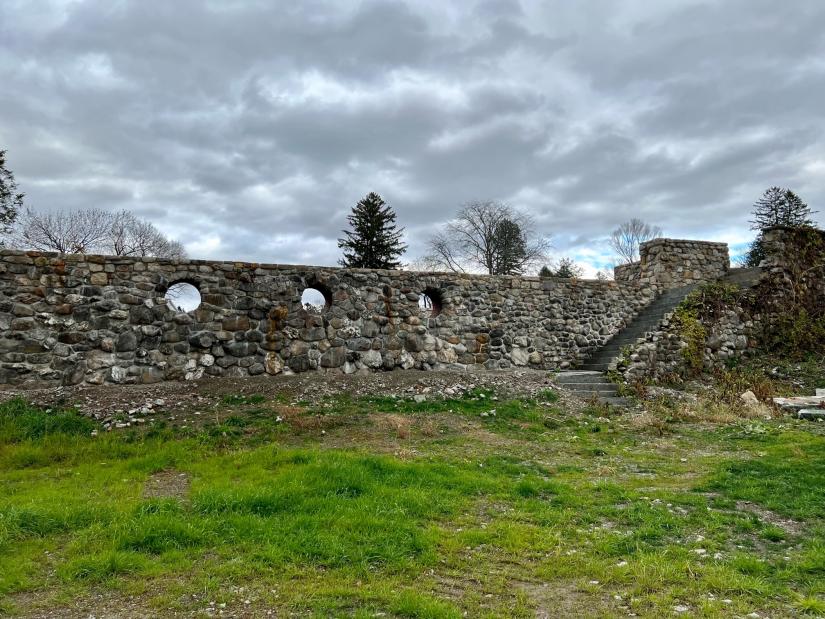 The wall is built of stones original to Halcyon Hall. During construction it is being reinforced and expanded. Photo by Judith O’Hara Balfe

Bennett Park, the Thorne Building: where they are now

MILLBROOK — Coming into Millbrook from Route 343 and turning onto Franklin Avenue, one immediately knows that something is missing: Yes, the Halcyon Hall structure is gone after years of watching it deteriorate, looking like a haunted mansion. Now there is nothing, just empty space.

What’s next? If one looks closely, there is something in the field: a stone wall, and, yes, there is a story behind the building of that wall, but that comes later.

What else is happening now that the buildings are leveled? There was some talk early on about the park opening in late 2022, but that’s not happening. After all, 32 acres of land have to be landscaped, and that includes building trails for walking and biking that will connect with existing trails that leading into the Village. The opening date will more than likely be in 2023.

Other plans include a Bennett College museum and a visitor’s center. Last but not least, there are plans to include amenities for outdoor venues for musical and theatrical performances. All of this takes careful planning, and the Millbrook Community Partnership (MCP) is planning for the very best.

In September, MCP announced that Suzie Kovner had joined its board of directors. A patron of the arts, Kovner brings special expertise to the musical and arts portions of both Bennett Park and the Thorne Building Community Center, which plans to have a performing arts center for dramatic arts, as well as dance, music, lectures, film offerings and many social events. It will also contain a dance class studio and a music/recording studio.

The $554,000 grant received by the MCP from County Executive Mark Molinaro in February 2022 will help, but is only part of the $21 million needed for restoration of the two-pronged project of the Thorne Building Community Center and the Bennett Park initiative, which are both under the auspices of MCP. Much of the funding so far has been raised by private donations, but a major fundraising campaign by the 501(c)(3) will be undertaken soon.

The project has actually moved quickly since the MCP was formed, and it has done so in a very public and transparent way, with several public meetings called to discuss what was wanted from each of these projects. Thus, the community feels very invested in both the Thorne Building Community Center and the Bennett Park project.

Those who had a connection to the old Bennett College will be pleased that the educational center, a well-respected woman’s liberal arts college, will be remembered and lauded at the Bennett museum. A second bandshell may also be in the plans, as music seems to be an integral part of Millbrook, evidenced by the many concerts arranged by the Millbrook Arts Group each year, and the summer “Music in the Streets” for the pleasure of Saturday visitors and shoppers.

When announcing the appointment of Kovner, Oakleigh Thorne, president of MCP, mentioned that her background and knowledge of the arts would indeed by invaluable as the project enters its next phase of development. So we know that progress is being made, and when the Thorne Building was opened to the public for tours on Saturday, May 28 it was finally possible to see how beautiful the building was, the possibilities it held, and how much work still needed to be done. But once again, the public felt invested in the project.

As winter settles in, we may see less movement on the Bennett site, but with the opening planned for 2023, there may be a lot of activity beginning in the spring. By summer, there may be hiking on the trails, music in the air and an influx of visitors to enjoy even more of Millbrook.

Now, as promised, the story behind the wall in the field at Bennett Park.

The wall shown in the picture is built of stones original to Halcyon Hall, but during construction it is being reinforced and expanded.

When  Halcyon Hall was torn down, the crew was were able to salvage stone to be used throughout the park, so there will always be reminders of the original buildings and the history of Bennett College.