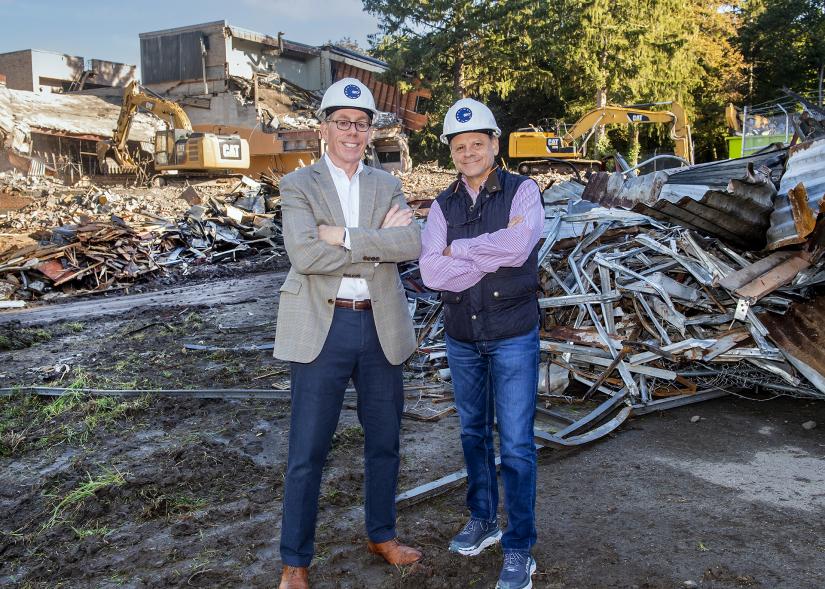 MILLBROOK — Long anticipated, the Bennett Park project is finally looking like a reality, as heavy equipment moved through the former Bennett College campus at the end of last week, demolishing the once beautiful buildings constructed in the 1890s.

Grateful residents are breathing a sigh of relief that the deteriorating buildings, which had become dangerous eye sores, are meeting their demise and that the demolition of the property has finally begun. It’s been years of waiting and wondering if it would ever happen.

The main building, Halcyon Hall, was built in 1893 at the corner of routes 343 and 82 at the entrance to the village of Millbrook. The college is lovely, made of wood and stone, but falling apart after years of neglect.

Bennett College moved to Millbrook from its original campus in Irvington, N.Y., where it opened as Bennett School for Girls in 1890.

Bennett College moved to the 22-acre campus at the head of the village in 1907. The all-girls college eventually became a co-ed facility in the mid-1970s, but continued to struggle financially; by 1978 it shut its doors for good.

In a statement issued on Friday, Oct. 1, on behalf of the Millbrook Community Partnership (MCP), Charles Pierce, an MCP board member, spoke about the progress made between the Bennett Park project and the Thorne Building Community Center project — both of which have been undertaken by MCP. Pierce understandably focused on last week’s demolition.

“I feel it’s been a great accomplishment, in part because there were two other major attempts to tackle this project and come up with a solution,” he said. “This has been in large part because we have engaged the community, the town and the village and anyone else interested, asking what they want. We talked to cross sections and got a great deal of information and that has meant popular support.”

The other phase of the project, renovating the Thorne Memorial Building into a multi-purpose community center, has also begun. Asbestos is being removed from the building. That arm of the project is expected to be completed by year’s end.

This is only the start of renovations for the Thorne Building, listed on the National Register of Historic Places. It’s stood at the head of Franklin Avenue for the past 125 years, many of those years it functioned as a school. In fact, the donation of the Thorne Building for educational purposes was the reason why the village of Millbrook originally incorporated.

When renovations to the Thorne Building are complete, it will be a light and airy community center, built for all to use. It will house a performing arts center, technology center, gallery and culinary arts center; other ideas have been discussed for the space as well.

Usage for the Thorne Building was discussed at many village meetings; until very recently, the village owned the building. Now, the nonprofit MCP owns it.

“Three or four years ago this was just about the Thorne Building,” Pierce said, “but Oakleigh [Thorne] brought in the Bennett project so the original project has expanded. By the end of this year the asbestos removal, abatement and the demolition should be complete. The two projects  taken together are energizing the life of Millbrook and Town of Washington and their citizens. We are determined to inject culture and education into the finished project.”

Pierce added he doesn’t know when the dual projects will be complete but he has total faith when done, they’ll be spectacular. He also thanked the others working on the project, adding Thorne has been instrumental.

“I feel that the leadership Oakleigh Thorne provided, the time and energy he carved out of his busy life and gave to the board and working with us, has brought this to pass.”

The estimated cost of both projects is $20 million. The next phase of the restoration of the Thorne Building will depend on how much money can be raised by its 501(C)3.