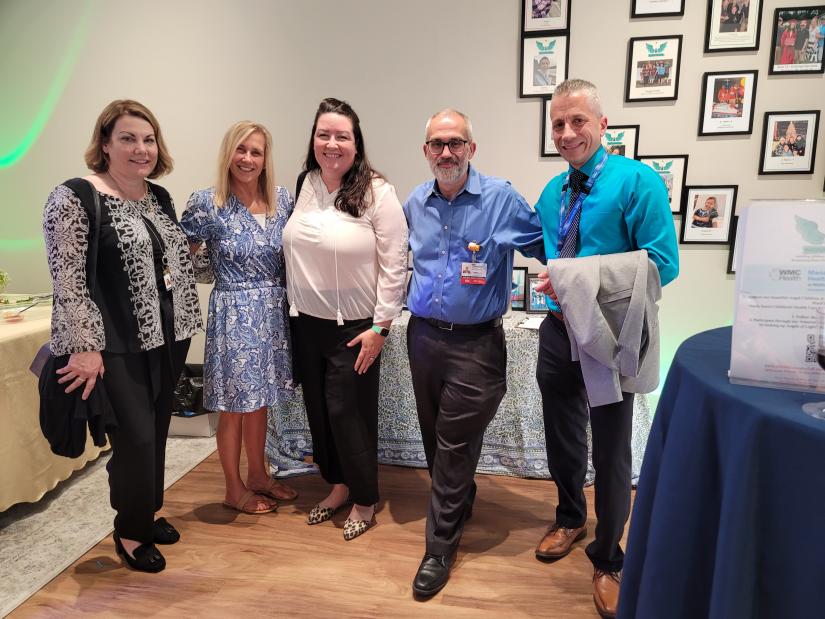 MILLBROOK — Angels of  Light, the group that for more than 20 years has brought Christmas to terminally-ill children and their families, has opened an office in the village of Millbrook at 28 Front St., to help the nonprofit as it aids even more families in need. The group has expanded its services beyond just the holiday season to assist ill children and their families year round

On Monday, July 25, from 4 to 7 p.m., friends and benefactors of the 501(c)3 organization visited AOL’s new headquarters, enjoying music by Christopher James and local DJs, food and beverages and door prizes. Some of the crowd took advantage of the outdoor tables as well. The turnout was amazing, as many came out to support the group that has supported so many itself.

The space comes with a five year lease; it’s airy, set far back from the street and one wall is covered with photos of many of the children and their families who have been helped by AOL in the past two decades. The photos are displayed in a heart-shaped pattern, and the effect is quite powerful, evidenced by the oodles of people who surrounded the collage.

State Senator Sue Serino (R-41) stopped by to wish AOL well, as did some of those who had been recipients of their kindness. So, too, did others who have supported the nonprofit over the years.

The group’s annual gala is always much-looked forward to and eagerly attended, as are other events AOL sponsors throughout the year, like a marathon.

Several Nuvance Health employees attended. One special attendee was 96-year-old Krista Langa, from Hearts and Hands of Millbrook, there to show her support.

AOL was started by Lori Cassia-Decker and her husband George, with help from their family, and later from friends and many volunteers. In 2016, they delivered more than 7,500 gifts to 1,300 children battling terminal disease. It was at that time AOL became a nonprofit.

When the COVID-19 pandemic hit in 2020, Cassia-Decker said she realized the need for such help existed all year long — not just during the holidays.

She and her husband announced at the time the expansion of their mission.

“Angels of Light’s initial mission to assist children and families with life-threatening illnesses living in the Hudson Valley has expanded to assist with medical bills, utilities, food, gas and much more year round,” they stated in 2020.

The Deckers, AOL Board President Danielle Mollica-Whiteley and Vice President Ariana Peterman agreed to accomplish such a large goal AOL needed dedicated headquarters. Now, with the new space on Front Street, clients and those in need will be able to make appointments, speak with AOL volunteers and meet their benefactors, in a place meant just for them. The space also allows for small get-togethers, like last week’s grand opening.

Volunteers are always needed at AOL, said Cassia-Decker, who added it’s a great place for students to get their community work volunteer credit.

Some volunteers help plan outreach events hosted by AOL, aside from the main gala. This year, there will be a 5K Run at Millbrook Winery on Sunday, Aug. 28; there will also be a Motorcycle Rally and Concert in the Park  at the Town of Washington Park on Saturday, Sept. 24. Other AOL fundraisers will be planned to finish out 2022 and then again for the whole of 2023.

Cassia-Decker said AOL is always grateful for volunteers and donations, just as it was to those who came out to show their support for its new space on the 25th. It is also on the constant look out for those who need help, because after all, that’s the end goal of everyone who works at AOL.