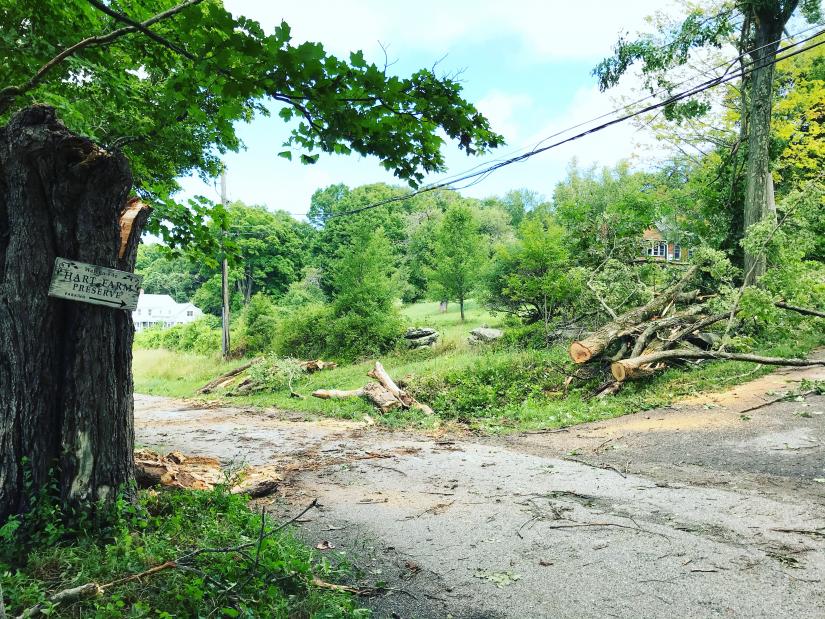 Signs of life on Friday morning but progress is slow

Late Thursday night, power company Eversource offered a prediction that restoration of power would be “substantially complete” by midnight on Tuesday, Aug. 11. The company said in its email update that, “Substantially complete means fewer than 1% of customers are still without power.”

On Friday morning, Northwest Corner residents were still reporting on social media that they had not yet seen any repair vehicles from Eversource or the tree removal companies that the power company normally works with such, as Lewis Tree Service.

The Lakeville Journal’s Janet Manko had spoken with one Eversource employee in Falls Village near the company’s station on Main Street near the Lee H. Kellogg School. That worker had said that the Eversource crews who are normally assigned to the area towns are all hard at work “but it’s a lot for one guy to do.”

Gov. Ned Lamont on Thursday, Aug. 6, called on the state National Guard to step in and help to clear the trees and branches that are blocking roads and hanging on power and telecommunications lines.

Lamont requested a presidential emergency declaration, which was approved late Thursday night by Pres. Donald J. Trump. Lamont had already declared a state of emergency in Connecticut on Thursday.

On Friday morning, many Northwest Corner roads remained closed. Earlier in the week, on the day after Isaias, all roads to Norfolk had been closed. By Friday morning, Route 44 had opened, making it possible to drive through North Canaan to the Stop & Shop market and then proceed to Norfolk and other nearby towns.

But Route 44 into North Canaan remained closed from Dutcher’s Bridge at the Salisbury town line to just before the center of town, at the C.A. Lindell hardware store.

Several main roads remained closed in Salisbury as well, including Salmon Kill, and in other towns.

Clearing the roads has been an urgent need, not just to keep the power lines clear but also to allow emergency vehicles to get to area residents in distress. A 54-year-old woman died in a fire on Wednesday night, in North Canaan. Her elderly mother and stepfather were able to exit the house, according to an article in the Waterbury Republican American newspaper, but they were unable to rescue their daughter, who has cerebral palsy.

The fire was possibly caused by a generator and electrical extension cords. Firefighters were delayed by trees blocking roads, according to the Republican American.

It has not been announced where the emergency backup crews will be deployed when they arrive. The Eversource outage map indicates that relatively fewer customers in the Northwest Corner were affected than those in the larger towns and cities farther south and east in the state.

Power has been slowly restored to some area customers, notably in North Canaan, where there had been 1,248 customers  (out of 1,471) without power on Thursday afternoon. By Friday morning, that number had been reduced to 505.

In Sharon on Thursday afternoon, Eversource said 1,789 out of 2,169 customers didn’t have power. On Friday morning, there were 1,793 customers without power.

Salisbury was largely spared the worst of the storm and on Thursday afternoon 1,217 customers out of 3,009 didn’t have power. But that number began to increase and early Friday morning, Eversource reported that 1,247 customers were without power. By 11:45 a.m., however, the number had decreased to 1,106.

Kent still was largely without power on Friday by mid-day. This weekend, the Chamber of Commerce had planned a Shop Safe Summer Sale, a COVID-19 iteration of the annual summer Sidewalk Sale. Some stores will be open for the sale, but most will only accept cash. The sale is scheduled to continue until Aug. 23 (www.kentct.com/kent-sidewalk-festival).

Meanwhile, Salisbury announced a summer sidewalk sale to be held on Saturday, Aug. 15, from 9 a.m. to 5 p.m. (www.salisburysidewalksale.com).

Libraries in many towns were also closed on Friday, and an Aug. 8 event at the Cornwall Library was postponed until Aug. 15.

Meetings of boards and committees in most towns were canceled. Road repairs continued in many towns including Lakeville and Cornwall, however, which contributed to the challenges of getting from Point A to Point B.

Essential services began to return by Friday morning. The Salisbury Sharon transfer station was open again, a relief for area residents who had piles of rotting perishable foods and no refrigeration.

There was a shortage of ice and water in the area on Thursday, with most grocery stores and convenience stores sold out before noon. Both were back on many shelves by Friday.

Grocery stores that had been running on generators with limited or no access to perishable foods were for the most part back open by Friday. LaBonne’s market in Salisbury had not lost power and had remained fully stocked. Stop & Shop in North Canaan and Sharon Farm Market were partially open on Thursday, selling only dry goods; Stop & Shop got full power back on Thursday in the middle of the afternoon.

Gas was also becoming more widely available as filling stations that had lost power were able to open again.

The filling stations that had not lost power had shut down their pumps by Thursday afternoon or Friday morning because they had run out of gas; customers were not only filling up their vehicles, they were also seeking fuel for generators and for barbecue grills.

Communication remained sketchy on Friday. Even with cell phones, not everyone was able to get the internet. There were also concerns that cell tower antennae that had been running on batteries would begin to run out of charge.

Town halls remained closed in most towns; many towns don’t have office hours on Fridays anyway in the Northwest Corner.

The Republican and Democrat primary elections were still expected to take place on Tuesday, Aug. 11. Secretary of the State Denise Merrill said on Thursday that Eversource has been notified of the locations of polling places that do not have power; the power company has been asked to make those sites a priority for the restoration of power. Registrars in area towns have also said they are looking at emergency polling locations such as schools.

As of Friday at mid day, the outage list from Eversource shows these customers without power in area towns.

The list of towns and impacts can be found at https://outagemap.eversource.com. If you are able to access the internet from a computer, you can see the town-by-town listing by clicking Connecticut under Customer Outages in the menu to the left of the map. If you are on a mobile device, touch Menu, then Customer Outages, and finally Connecticut.

Gov. Lamont and Attorney General William Tong have demanded that the Public Utility Regulatory Authority (PURA) investigate Eversource’s response to the power outages caused by the storm, and they recommend that fines be levied against the company.

In a news release on Aug. 6, Tong said, ““We pay far too much for our energy in Connecticut to be left in the dark. Consumers have poured millions of our ratepayer dollars into resiliency investments to harden our system and prepare for this precise type of storm.

“Eversource and United Illuminating appear to have been unacceptably unprepared for Isaias and must be held accountable. The Office of the Attorney General will be fully engaged in this investigation on behalf of ratepayers who are entitled to answers and any appropriate relief.

“PURA is right to open this investigation, and must be prepared to issue real fines and penalties to hold the utilities accountable for their failure.

“Consumers have a right to be angry here — as am I. At the same time, I am deeply grateful to the line crews and first responders who have worked tirelessly to restore power across our state. Their efforts should be commended and they deserve our full support.”

As for fines, the news release from the attorney general said, “PURA must make clear at the outset of this investigation that it will consider the prudency of the companies’ preparation and response and that it may impose appropriate penalties if warranted. A prudency review essentially examines whether the utility met the industry standard of care and whether there is any causal connection between imprudent conduct and actual loss or damage.

“Such a prudence review could lead to fines and penalties if noticed at the outset of the proceeding. Penalties could include disallowing storm cost recovery and, in a future rate case, reducing the utility’s authorized return on equity.”