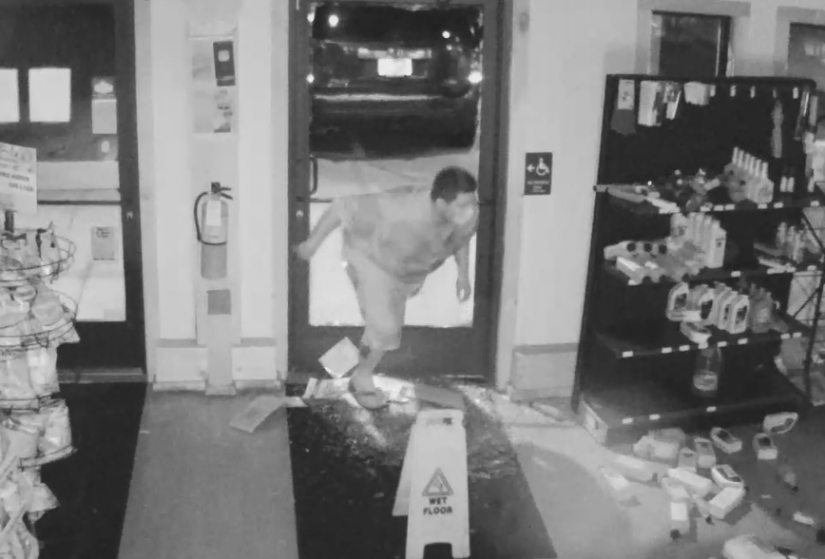 The State Police are seeking information that can help them find two men who broke into a Goshen gas station early Wednesday morning and stole armloads of cigarettes. Photos from CT State Police.

Two men broke into the Village Market Shell gas station at 59 Torrington Road in Goshen on Wednesday, Sept. 16, at about 2:40 a.m. The Connecticut State Police are asking for any information that can help them identify the suspects, whose images are seen in the photos with this article.

The police sent out a news release on Friday, Sept. 18, at about noon describing the break-in. They said that “two males backed a Honda Pilot into the front door of the Village Market Shell gas station. The operators entered the store and took only cigarettes.”

It appears from the photographs that the Pilot was used to break the glass in the door of the convenience store, and that the two men stole as many cartons and packages of cigarettes as they could.

“The first suspect is described as a heavy-set white male, with short dark hair and a tattoo on the right side of his right leg below the knee,” the police said. “He also has some sort of tribal sun tattoo on his right forearm.

“The second suspect was wearing a hoodie and had his face covered.

“The Honda Pilot was believed to be stolen out of Meriden and was later recovered in Waterbury.”

Anyone with information is asked to call the State Police in North Canaan at Troop B; the phone number is 860-626-1820.