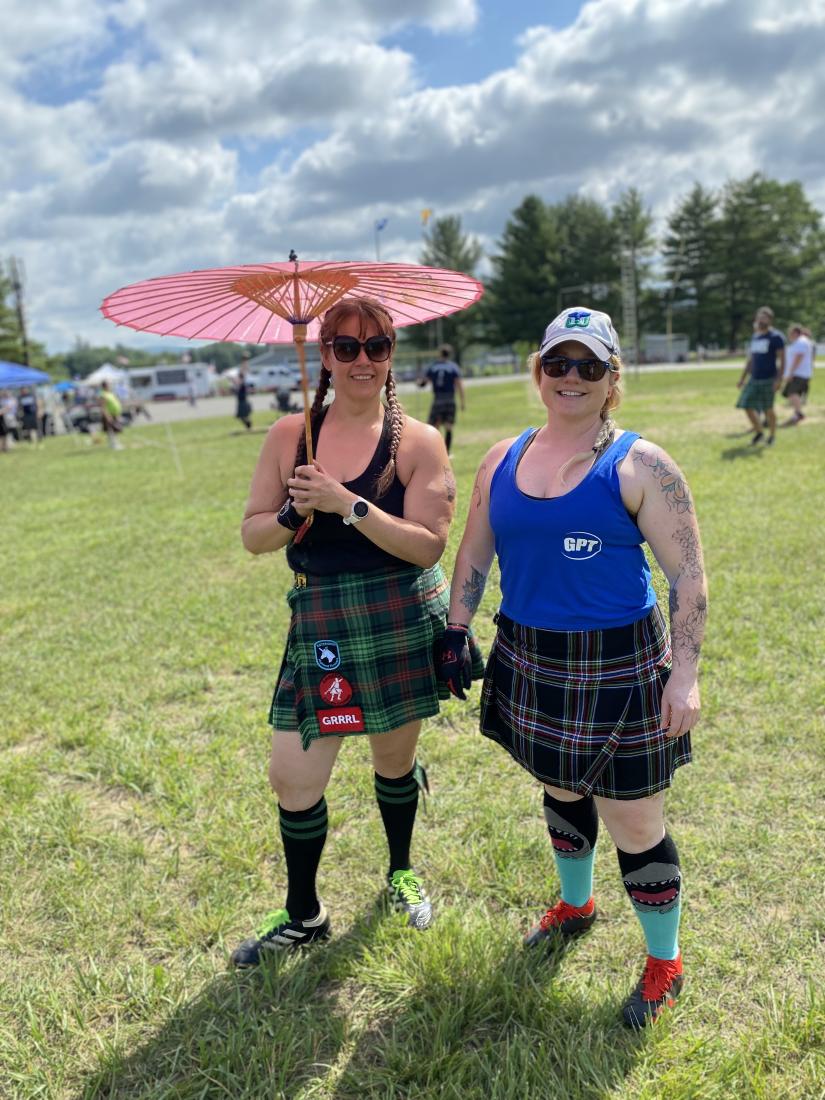 LIME ROCK — The weather wasn’t really appropriate for a Scottish festival: humidity and 90 degree temperatures aren’t really the thing for men and women wearing wool kilts and competing in trials of strength that include tossing telephone pole-sized cabers and 13-pound rocks. There was a 1-mile kilted run, a “haggis toss” and of course, one of the highlights of the annual outing, the pipe and drum band competition in mid afternoon.

This year’s Round Hill Highland Games were  held at Lime Rock Park on Sunday, June 27. Car racing is not allowed at the track on Sundays, so non-automotive events are often scheduled for that day of the week. Also using the track that day was the Ridgefield Cycling Club, which had a large outing around the region’s roadways that morning. The cyclists began and ended their day at the track, taking off en masse while the Scottish pipers warmed up their instruments, creating an unusual soundtrack for a cycle ride.

This is the 98th year for the Round Hill Highland Games. The tradition began at an estate in Greenwich, Conn., called Round Hill that had many Scottish staff members. They were invited to have a day of picnics and games on July 4 at the estate.

More recently the games have been held at Lime Rock, drawing clans from all over New England. Most clans had informational tents (that threatened to blow away in the gusts that day). There was also an informational booth for the Norfolk Curling Club, a sport with Scottish roots.

Competitors in the different games and trials were diverse; all had some kind of Scottish connection, but the male and female athletes (all wearing kilts) were of diverse ages and ethnic groups.

There were also tents selling leather goods, wooden toy swords and axes, Scottish-themed jewelry and T-shirts and more. There were food and beverage concessions as well, although this year the donut truck was more visible than the one that is usually there selling traditional Scottish haggis.

David Byrne at the Buchanan clan tent said the big Highland Games each year are held in September in New Hampshire, attracting visitors and participants from all over the world. The weather there is closer to the cooler climate of Scotland, he noted, and the setting is more mountainous and green, like Scotland.

The rolling hills behind Lime Rock Park were lovely, nonetheless — although many of the trees were brown, victims of the recent gypsy moth caterpillar infestation. Many ash trees are also dead on hillsides now, due to the multi-year attack on them by the emerald ash borer.