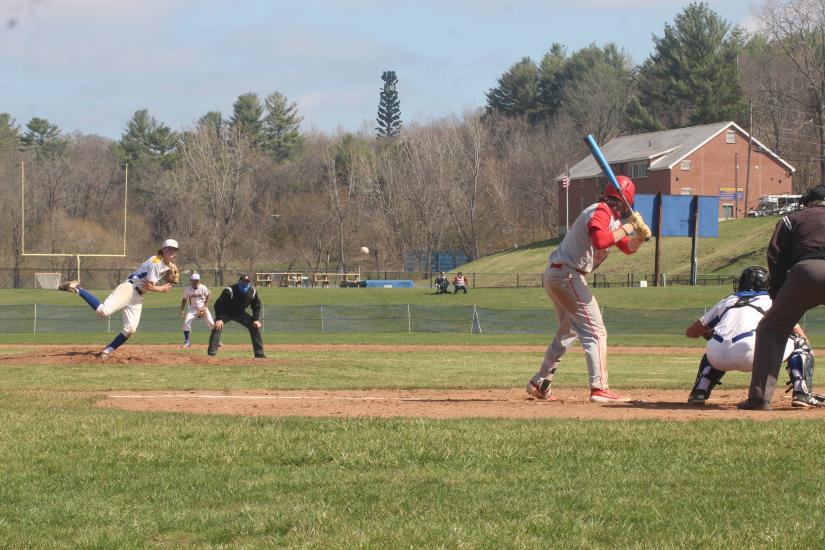 Keaton Terrall, a senior, was the first man on the mound during the Mountaineers’ opening day game Saturday, April 19, against Northwestern Regional. Photo by by Hunter O. Lyle

FALLS VILLAGE — With the knowledge and experience gained from the fall and winter sports seasons, Housatonic Valley Regional High School (HVRHS) has brought sports back for the spring in what looks to be a semblance of normal.

“[During the winter] you’re inside and it’s a lot more difficult,” HVRHS Athletic Director Anne MacNeil said. “Spring is a lot like the fall. We’ve kind of already done it.”

With the exception of boys lacrosse, which was canceled due to the amount of physical contact between athletes and because of lack of interest this year, all sports are back with limited restrictions. Baseball, softball, track and field, golf and girls lacrosse will all hold full-season schedules, up to 20 contests, and even postseason state tournaments.

Among the somewhat eased restrictions is one that says active players (besides baseball and softball catchers as well as the two face-off players in girls lacrosse) do not have to wear masks.

While some schools in the conference are allowing spectators from both schools, MacNeil said HVRHS will only allow home spectators. Only two adults per athlete can attend; and no more than 200 spectators will be allowed on the school’s campus per day. No children are allowed. Spectators must social distance and wear masks.

Unlike the winter sports, spring season sports will not be livestreamed.

“If you look past the masks, it’s like, wow, this is almost normal,” MacNeil said.

Practices for the six sports began on either Saturday, March 27, or Monday, March 29. The first games were held Saturday, April 10. The regular season for all sports ends about seven weeks later, either on Thursday, May 27, or Friday, May 28.

As of Saturday, April 17, the baseball team had played three games without a win, losing to Northwestern, Shepaug and Litchfield. Softball has played Northwestern and Shepaug so far, dropping both contests 14-2 and 16-11 respectively. Like baseball and softball, girls tennis played on opening day, beating Gilbert while on the road.

Boys and girls track and field debuted on Tuesday, April 13, at home, matching up against Gilbert, and would have faced Wamogo at home on Friday, April 16, had their meets not been postponed due to precautionary measures related to COVID.

Boys tennis and girls lacrosse opened on Monday, April 19, with the boys traveling to Northwestern and the girls hosting St. Paul Catholic High School. The next day, Tuesday, April 20, the golf team competed against Nonnewaug, Terryville and Thomaston for their first of 13 contests.

Anyone interested in the times and dates of games, as well as the stats and rosters, can go to www.ciacsports.com.