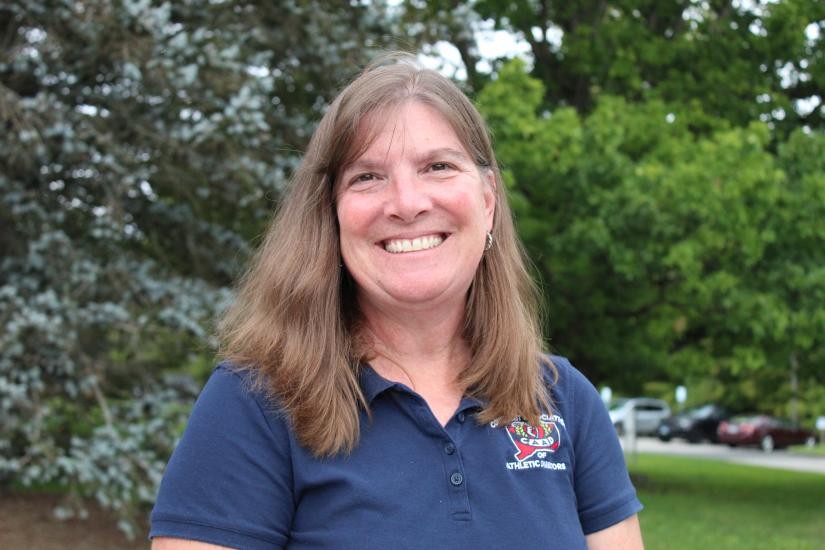 FALLS VILLAGE — There have been two things anyone can count on when attending a Housatonic Valley Regional High School (HVRHS) sporting event: the blue and gold uniforms representing the Mountaineers and Athletic Director Anne MacNeil sitting somewhere close by.

During her tenure, she has seen championships and fostered All-Stars, experienced playoff droughts and weathered a pandemic.

She cherishes the work that she does, cheering her teams on all the while.

“I say to kids all the time, I have the best job,” said MacNeil, “I get to watch sports all day.”

MacNeil grew up just over the New York border, where she attended Dover Plains High School, played tennis and was a cheerleader. Initially wanting to be an athletic trainer, MacNeil graduated from Ithaca College with a degree in athletic training, then went on to earn her Certified Masters in Athletic Administration via the National Interscholastic Athletic Administrators Association.

“I want to be here. I’ve been here for years. I love this area,” MacNeil recalled saying in her interview. “I have no desire to go anywhere else. I like this job, I like this community.”

Nine years later, MacNeil prides herself on the number of HVRHS students who play sports — between 45 and 50% on any given year — and the accomplishments the teams have made over the years.

An average day as an athletic director consists of MacNeil planning and managing nearly every aspect of every Mountaineer game, checking in on students and their grades, communicating with coaches, referees and travel organizations and hoping for good weather. If any problems occur, MacNeil is in charge of coming up with the solutions.

“It’s really hard to sometimes get everything organized,” said MacNeil. “I don’t think people have an idea of what that’s really about.”

After years at the helm of Housatonic sports, the most rewarding part of MacNeil’s job is seeing the students grow and flourish, not just on the fields and courts, but in every part of their high school careers.

“The best part about it is I love watching our kids succeed and push themselves and break out of their shell,“ said MacNeil. “We are small but we have so much to offer and our kids do so much. The best part is to see a student athlete on a field, but also watch them succeed as a musician or academically, or in some other realm.”