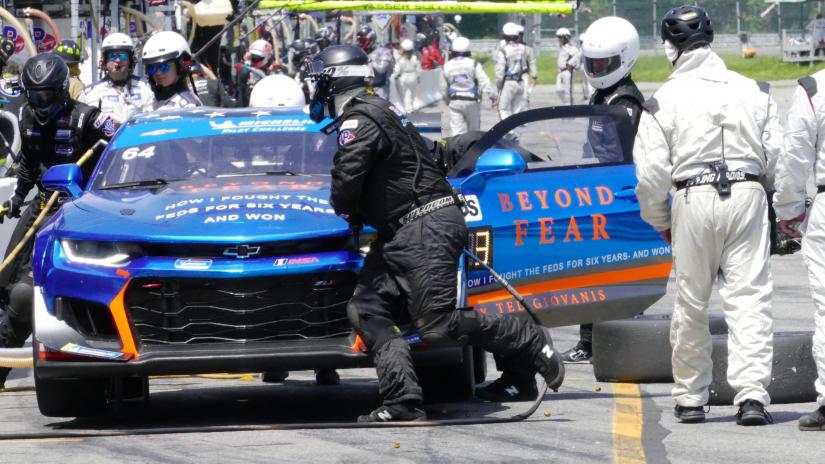 For true automotive fans, there is almost as much excitement in the pit area as there is on the track. Photo by Lans Christensen

LIME ROCK — Auto racing tends to go at high speed and in short bursts. The International Motor Sports Association race at Lime Rock Park last weekend follows a different format, with huge cars and top American drivers duking it out during 2 hours and 40 minutes on the track.

Well, that’s normally how it works — but on Saturday, July 17, the rain put a damper on the racing, as it did on so many activities scheduled for the weekend. The NorthEast Grand Prix had to be stopped after only about an hour and a half; what started as a delay, waiting for the rain to pass by, turned into a full stop.

Taylor expressed enthusiasm for the track and the crowd, saying, “This looks like the best crowd we’ve had all year so far. Lime Rock always brings a great crowd — especially big sports car fans, a lot of families.

“It’s a big Corvette crowd here, and you can really see their appreciation.”

There was also rain in the morning, but not enough to stop the racing.

Beginning it all was U.S. Sen. Richard Blumenthal (D), who waved the flag to start  the racing on Saturday.