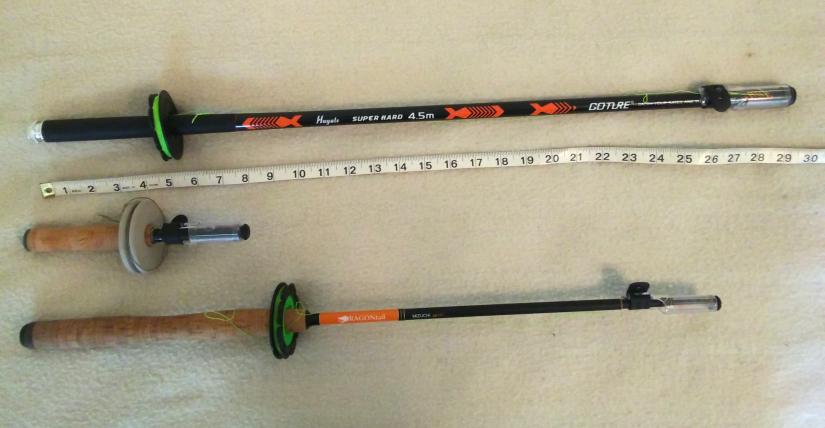 These three rods illustrate the range of fixed-line fishing options. The top is a heavy rod designed for carp fishing, and is almost 15 feet long when extended. The middle rod is very small at 5 feet when extended and barely 8 inches collapsed, making it literally pocket-sized. The bottom rod can be fished at lengths of about 8 feet, 9.5 feet  and 11 feet. Photo by Patrick L. Sullivan

In which we learn to use the Tenkara rod

A few years back I received a strange birthday present from a friend. It was some kind of fishing rod that collapsed. I took the cap off the butt and the sections started sliding out. I pushed them back in, screwed the cap back on, and stuck it in the fish closet.

Where it remained for several months, until said buddy asked, “Did you try out  that Tenkara rod?”

I hesitated. Asking the next question would reveal my ignorance. On the other hand, so what?

The rod in question was a 10.5-foot Temple Fork Tenkara rod. Under my pal’s tutelage, I extended it and he showed me how to tie a line to it.

“OK,” he said after I took a few tentative casts on the grass. “Let’s go fishing.”

Tenkara refers to a collapsible, telescoping, lightweight rod that has a line attached to it and no reel. The rods are similar in feel to fly rods, but there is no reel. Did I mention there is no reel?

A line is attached to the tip via a short piece of cord called a lillian. I don’t know why they picked on Lillian.

I asked the obvious question.

“What happens when the fish runs?”

Answer: It either stops or breaks off.

There are all sorts of fixed-line telescoping rods around, and many different names for them, many in Japanese. I don’t pretend to understand the nuances. I just call it Tenkara and leave it at that.

I always groan when someone says some computer thing is “intuitive.”

But Tenkara is intuitive. If you’re standing in a stream with a long stick with a string attached to it with a fly at the end, what else are you going to do except make a cast?

The Japanese have been fishing this way for centuries. It’s a recent development in the U.S. A small but increasing number of fly-rodders are playing around with it.

Some, like my buddy, have gone almost completely over, even to the extent of selling most of his Western fly rods.

I continue to view it as an adjunct to a fly rod … but there are occasions when I barge into the woods in search of brook trout armed only with a Tenkara rod.

The advantages are many. The rods collapse to something that’s usually a foot or two long, tops. Yet they extend to anywhere between 8 and 13 feet.

For those of us accustomed to fishing little blue lines with an abbreviated fly rod (under 7 feet long) trying it with a 9- or 10-footer seems nuts.

But there is often far more room in those streams than you might think. And having the extra length means hanging back farther from the stream. Which means the spooky trout can’t see you.

A well-planned cast allows the angler to keep the line, and even most of the tippet, off the water. So when fishing dries, you can get a great drift.

When it’s time to move on, collapse the rod, secure the line on a spool or line winders attached to the rod, and make your way through the woods to the next spot. This is a lot easier than scrambling around with a rigged fly rod.

Tenkara is not just for little brookies, either. I bought an inexpensive Chinese rod, 13 feet long, and tied two Wooly Buggers on. Then I hit the Housatonic River.

On the second cast I hooked two smallmouth bass. Neither was especially big but together they were a handful. After a lengthy fuss I got them both in the net. (Then I lost the net but that’s a different story.)

In the summer I fish for largemouth in a lake. Hooking a 4-pound bass on a fixed line rod is a lot of fun.

For river fishing, I found that using a Tenkara rod made me a better overall angler. I had been getting lazy about where I was in the river, preferring to compensate for a poor position with a longer cast or a tricky mend.

With Tenkara I was plotting my moves ahead of time, much as a golfer sizes up the next two or three shots.

There are disadvantages compared to Western fly gear. If you have a 12-foot rod with a 12-foot line and 4 feet of tippet, getting your fish into the net can be difficult, unless you have really long arms and a net with a 6-foot handle. Which I don’t.

And despite my twin Wooly Bugger experiment, these rods are, generally speaking, not built for slinging big heavy weighted flies around. (Although I have one 18-footer, designed for carp fishing, that can handle a saltwater streamer easily.)

Note: People often compare Tenkara rods to cane poles. There are some similarities, but Tenkara rods are much more sensitive and infinitely more portable.

Mostly I like Tenkara because it’s fun. I’ve been fly-fishing since the age of 12, roughly, and I am 58 now. I make that 46 years.

And I’ve had lots more fun in the last six, largely because I have added Tenkara rods to my lineup.

I have a few recommendations if you’re curious.

Chris Stewart runs the Tenkara Bum website and shop. He’s forgotten more about this than I will ever know.

Teton Tenkara is a website from Tom Davis, who has also forgotten more …

There are several stateside Tenkara companies that offer rods, lines and accessories. I have done business with Tenkara USA and Dragontail Tenkara and been very pleased.

I also recommend Morgan Lyle’s book “Tenkara Today,” which cuts through the more esoteric aspects of Tenkara and gets right down to the nitty.