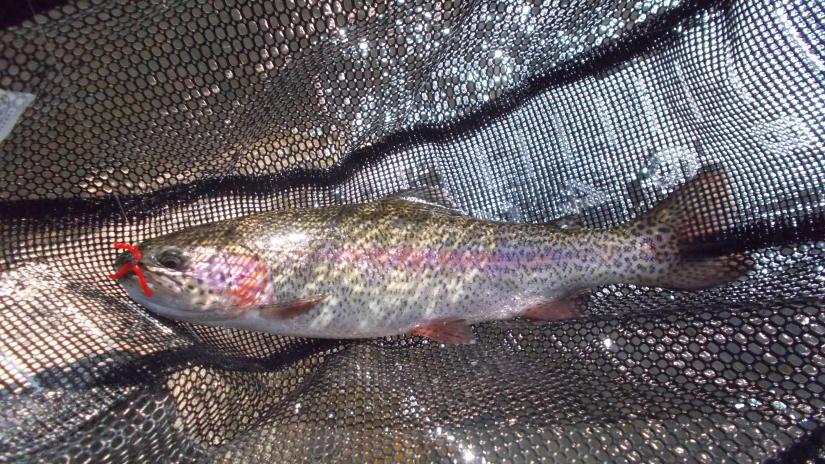 This Blackberry River rainbow was caught at Beckley Furnace in North Canaan in early April with a heavy squirmy red worm fly tied by Harold McMillan at Housatonic River Outfitters. The fish was returned to the water unharmed. Photo by Patrick L. Sullivan

Looking back: Specks of good news in challenging year

There was one very good thing that happened in 2020: It was the year I finally got the hang of fishing with specks.

I define “specks” as flies size 20 and smaller.

Itty bitty bugs are present on all trout waters, usually year-round. Trout eat them, and anglers using the right imitations catch the trout.

That all changed this year, when I discovered a brand of fluorocarbon tippet that worked for me. Without getting into the aquatic weeds, suddenly the practical difficulties of using specks were significantly diminished.

As the pandemic lockdowns began, Gov. Ned Lamont had a brain wave, or somebody had it for him. Trout season opened about two and a half weeks ahead of schedule, with the result that in late March, when everybody else was huddled inside waiting for the end of the world, I was hauling a fat 22-inch rainbow trout out of the Blackberry River in North Canaan.

Also in March, in the no man’s land between the Great Falls and the Falls Village power station, I caught a nice fat small-mouth that was probably looking for a good place to spawn, and a sinister-looking pike that would not fit in my 24-inch net. I have great respect for pike, especially for their large, sharp teeth. Also the slowly working jaw muscles.  I clipped off the fly without getting my fingers anywhere near its mouth.

April: Started clambering around the little blue lines, those streams holding wild brook trout that provide great sport for those inclined to expend great physical and mental effort in pursuit of little fish.

May: More of the same, weather permitting. The rod of choice was a Cabela’s CGR fiberglass 6.5 foot 4 weight, supplemented by the Dragontail Mizuchi zoom tenkara or fixed-line rod.

June: By Memorial Day, water temperatures in the Housatonic River were at the point where wet wading was not only possible but preferable. The trout were heading into their summertime Witness Protection mode, so I targeted small-mouth bass.

July: It was not a terrific small-mouth year on the Hous. I didn’t catch many, and when I did, they were larger than my usual clients. Almost completely absent were the dinkers, the green-colored juvenile fish that are usually so ubiquitous as to qualify as a nuisance.

August: The little blue lines were out of contention, as we experienced drought conditions. So I floated around a lake and caught large-mouth bass, gave a couple of lessons, and generally loafed.

September: Got a fair bit of time in on the Esopus in Ulster County, N.Y. Caught more and bigger rainbows than usual.

October: Still giving the blue lines a pass, I took advantage of the fall trout stocking on the Blackberry to practice my speck technique. This was supplemented by a couple of all-too-brief trips to the Esopus, where the specks produced on pickier trout.

November: Pretty much wound things up where the season started, on the humble and hard-fished Blackberry.

December: With the blue lines back in play, made a couple of forays to the Stream That Shall Not Be Named, to see if the speck treatment would work in that setting. It did, but the wild brookies seemed more interested in big bushy flies that are bigger than their mouths.

Then it snowed, and I reluctantly put most of the fishing gear away.