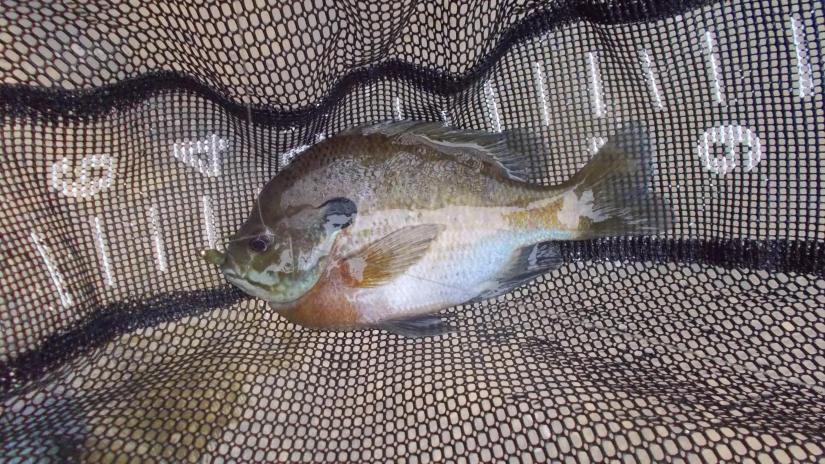 They may not look like much in the bottom of a giant net, but panfish provide excellent sport during low flow, high water temperature conditions. Photo by Patrick L. Sullivan

Fishing for panfish in the grim mid-summer

In case you haven’t noticed, we’re having a drought.

Take a look at your nearest babbling brook. Pretty low, isn’t it?

Or check out the Housatonic River. Better yet, get in it without waders. It’s bathtub warm.

At least Mother Nature has cheesed it with the super-hot weather.

We’ve seen this before, and we’ll see it again. But it still stinks.

So what does the fly-rodder do?

You can still fish the West Branch of the Farmington, from the dam upstream of Riverton down to the Church Pool in Barkhamsted. It’s low but it’s cool, and mornings are going to be better than evenings on average.

This situation presents an opportunity to do two things: First, wade to places that would normally be out of range, and work on dry fly skills.

You’ll want a long rod with a fairly light line. A 10 foot 4 weight would be my starting point, and I would be prepared to go lighter if possible.

The flies don’t have to be tiny. Just minuscule.

This is also the time to test that Tenkara rod you bought in a moment of weakness and have been avoiding ever since.

With a basic 12-foot Tenkara rod you can keep all of the line off the water and just present the fly and the tippet, and in theory achieve the ideal drift.

For the fly rod I recommend long leaders (12 feet and up) tapered to 5X, and be ready to add 6X or lighter tippet if the trout go into “Yeah I’ll eat that no on second thought let’s just torment the poor slob at the other end of the line” mode.

On the Housatonic, mornings are definitely your best bet. And when I say “morning” I mean “dawn.”

Once the sun hits the water the small-mouth go into witness protection.

Try a soft hackle wet fly tied to 18 inches of fluorocarbon tippet and attached to the bend of the hook of whatever you’re using on the surface. Soft hackle wets are generically buggy and while the floating fly might get the smallies’ attention, they will often pass on it in favor of the less-gaudy thing right behind it.

Lakes and ponds have more water in them than rivers, even during a drought. But that water is still going to be warm.

So forget about trout for now, and try light fly tackle or a fixed-line rod for panfish.

Bluegills, pumpkinseeds, and whatever else falls under the vague heading of “panfish” don’t seem to be bothered by water temps at or around 80 degrees.

And these species will take just about anything in nymph form, so deploy that popper-dropper method again. If they can’t get their little mouths around the popper, they will opt for the nymph.

This also presents an opportunity to introduce a youngster to the fly rod, as panfish are not exactly leader-shy and will not be put off by a sloppy cast.

Heck, when I’ve got one on the hook there are usually three or four others hanging around like a rooting section.

And they have short memories. I’ll release Barney the Bluegill, cast the same flies to the same place, and almost immediately hook up with Percy Pumpkinseed or Ralph Rock Bass.

So angling right now is a question of not letting the perfect be the enemy of the good. When one door closes, another opens. And he who laughs last gathers no moss.