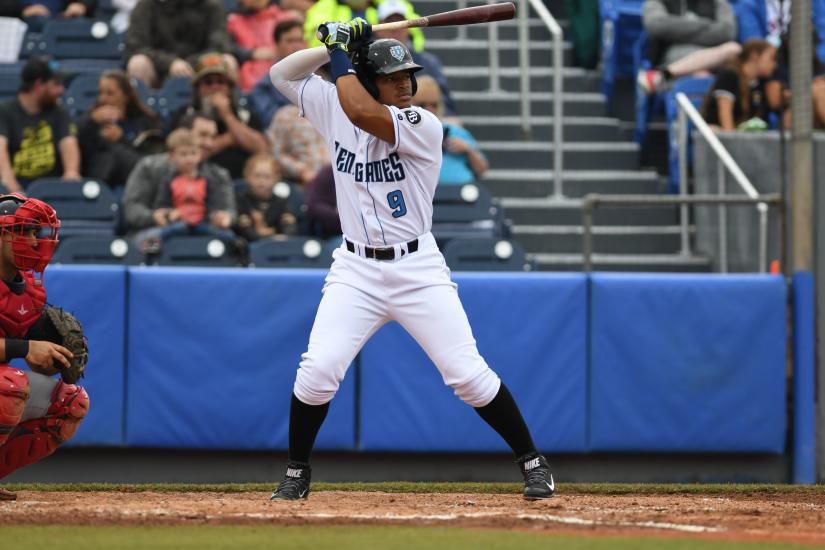 A player for Dutchess County’s hometown baseball team, Diaz Pedro of the Hudson Valley Renegades readied himself at home plate with a bat in hand. The Renegades will now be a Yankees affiliate. Photo by Roy Notar

WAPPINGERS FALLS — The Dutchess County Legislature approved a $1.4 million bond resolution to fund critical improvements to Dutchess Stadium on Route 9D in Wappingers Falls on Feb. 4, in hopes of boosting the economy and improving county facilities. Not only will the upgrades ensure that the county owned and operated stadium will receive the fixes it needs to meet Major League Baseball’s (MLB) health and wellness standards, but they’ll also create a modernized facility to support the new affiliation between the Hudson Valley Renegades (Dutchess County’s hometown team) and the New York Yankees.

While Dutchess Stadium has hosted countless sporting events, outdoor concerts and other community events during the last two decades, the arena was considered “quite a controversial program” in the county when it first opened in 1994, according to Chair of the Dutchess County Legislature Gregg Pulver (R-19), of Pine Plains.

“People didn’t know if we could sustain a minor league baseball team in Dutchess County,” Pulver explained. “It was the first ever built in our county; we didn’t know how it was going to work out. I think people were concerned that it was just going to be a money pit, that the county was going to be able to subsidize baseball in order to keep the stadium operational.”

However, the county’s initial concerns eventually lessened as the stadium made a significant economic impact over time. In fact, based on the economic impact study that was completed in 2013, Pulver said the stadium pumped almost $5 million into the regional economy.

Looking at the planned improvements, the county is seeking to replace the original stadium lighting with 100-foot LED lighting as well as to complete design work for future compliance projects and upgrades, according to a Feb. 8 press release issued by the Legislature. The $1.4 million proposal marks the first of several the Legislature is considering in order to modernize and upgrade the stadium.

Pulver reported the county plans to hire an architecture and engineering firm to do the design work, adding all of this work will be a “revenue neutral kind of bond.

“Anytime you’re doing a facility, you have to spend money at some time to make it better,” he explained, “so we’re very excited. The vote in the Legislature was overwhelming.”

Indeed, the Legislature’s final vote tallied 23 votes in favor of the funding and two votes against it.

With funding for the upgrades now approved and baseball season on the horizon, local sports fans will soon be offered a once-in-a-lifetime chance to watch the New York Yankees Minor League play in Dutchess Stadium.

Pulver confirmed that the Staten Island Yankees Club will be moving into Dutchess Stadium, and that this team is the Long Season Class A affiliate team of the New York Yankees. As a result, the Hudson Valley Renegades will become a Yankees Minor League Team (it has six in the U.S.).

According to the Legislature, the Yankees invited the Hudson Valley Renegades to become an affiliate last December. The Renegades have been partners with the Tampa Bay Devil Rays since 1996, before Major League Baseball constricted the number of its minor-league affiliates. Through this new full-season affiliation with the Yankees, Jeff Goldklang, president of The Goldklang Group of Professional Baseball, said the Renegades will transition from 38 home games to 60 home games this season and will likely grow to 66 games in 2022.

“Renegades fans have supported the franchise phenomenally since our inception in 1994, so in terms of attendance [post COVID-19] I would anticipate only a small uptick since we’ve sold to close to capacity most years,” Goldklang said. “However, the energy from our fan base is through the roof… We’re receiving requests from a broader geographic footprint than in years past, and during the season anticipate a strong push from out-of-towners looking to get a glimpse of Yankee prospects.”

Goldklang further explained that in order to meet the new facility standards imposed by MLB, Dutchess Stadium needed multiple upgrades since much of its player development spaces “were original to 1994 and were inadequate for the modern needs of health and wellness for Minor League players.

“We’re obviously thrilled that those improvements have been green-lighted, as our future literally depended upon it,” he said.

Reflecting on the ways in which the county and its residents will benefit from the Renegades now donning pinstripes, Dutchess County Executive Marc Molinaro said, “This partnership will not only bring decades of more fun, family entertainment to our community, it will continue to make Dutchess Stadium an economic engine that will enhance all residents’ lives.”

For more information, check out the Renegades’ 2021 schedule at www.milb.com/hudson-valley/tickets/2021-schedule.