Visiting the past through Lakeville Journal photo archives

We are continuing in this issue to share some of the wonderful old photos that Kathy Phillips of Sharon and Perry Gardner of North Canaan have been digitizing for us from our photo archives. Most of the images are from the 1970s to the mid 1980s, an especially fun time, as many of the people in the images still live here in the area.

If you like these photos, let us know; and if you are certain you can identify any unidentified people in the images, send an email to cynthiah@lakevillejournal.com.

We have added summaries of stories on this page, but if you’d like to go back and read the entire articles, go to our online archive, hosted by the Scoville Memorial Library of Salisbury, at www.scoville.advantage-preservation.com. That way, you can look at the week a photo was taken and match it up to an issue of The Lakeville Journal; eventually, you can do the opposite and look up an article in a 1984 or 1985 newspaper and then search the photo archives. We have not digitized every single photo on the negative strips in our collection, there are just too many of them. But we have tried to at minimum include the photos used in each issue, as well as a few extras; we are only presenting a single image from our collection on this page.

We hope to have all these photos in a searchable format on the internet. We also hope at some point to raise funds to digitize the remaining 60,000 or so images in the collection. We will let you know as we make progress on this project. 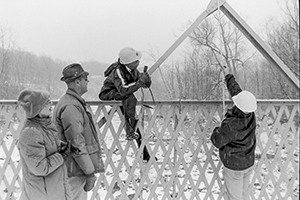 The Iron Bridge over the Housatonic River, connecting  the Amesville section of Salisbury with Falls Village, got some needed repairs back in 1985. This photo from our issue of Feb. 7, 1985, shows two of the region’s longest-serving first selectmen, Charlotte Reid of Salisbury and Peter Lawson of Falls Village. The two town officials watched, according to the photo caption, as engineers William Bright, sitting on the bridge railing, and Gregory Stefano, at far right in the photo, did an inspection. 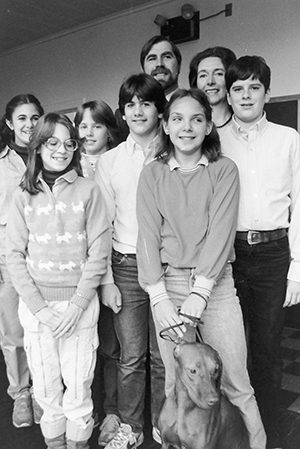 The Talk of the Teens

This photo by Chris Jones from Jan. 3, 1985, shows the editors of a school magazine put out by students at the Lee H. Kellogg School in Falls Village, called Talk of the Teens. From left in the photo are Marilyn Zovickian, Lusha Caliendo, Kristen Kubarek, John Ruotolo, William Greene (principal), Julia Sinclair, Wendy Insinger (editor in chief) and David Matheson. 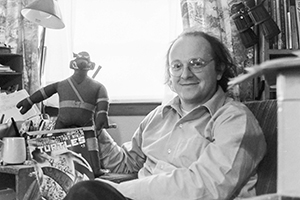 In January 1985, Brigitte Ruthman profiled Peter Laird, who lived in Sharon at the time and who had in the past year created a comic book series called Teenage Mutant Ninja Turtles, working with Kevin Eastman.

Laird had moved to a home at Silver Lake Shores in Sharon with his wife, Jeannine, who had recently been hired to teach at Housatonic Valley Regional High School.

In the interview for the Jan. 10 Lakeville Journal, Laird and Eastman couldn’t quite hide their astonishment that the series had received such positive reviews. They were about to embark on a third printing of the first edition, which they were sending to customers by U.S. Postal Service. Laird was taping up boxes and sealing and addressing envelopes in his Sharon living room during the interview.

Some fans were writing to Laird to say how excited they were to have a copy from the first printing of the first Teenage Mutant Ninja comic. Those relics at that point were selling for the astronomical price of $25. On eBay this week, similar first editions were selling for between $4,000 and $55,000 depending on their condition. 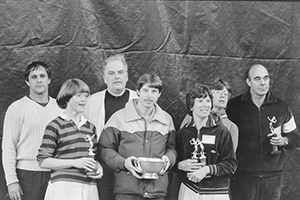 Feeling the love, at tennis tourney

Sometimes photos in our back issues were submitted by community members, as was the case when beloved Salisbury veterinarian Dr. Gordon Johnson, also a talented tennis player, took these photos at the Salisbury Invitational Tennis Tournament. This photo and a full report of the sports action were reported in the Jan. 3, 1985,  Lakeville Journal.

The listing of the awards in the article seems to be, well, unclear, but what we do know is that some of the champion players of the day included Diane Mayland, Rusty Chandler, Robinson Leech, John Miller and Joann Tapley. That year, Miller was also joined by his son, Josh, in a doubles match. And Rusty Chandler was joined by his 18-year-old son, Chis Chandler (who is now headmaster of the Salisbury School) in doubles action.

In this photo, we feel we have identified John Miller in the back row, wearing a light colored sweater; perhaps Joann Tapley in front of him in a striped shirt; the man in the center holding the bowl seems to be Frank Silvernail, although he is not listed in the article that accompanies the photo. Diane Mayland in the front row holding two trophies and Rusty Chandler at the far right in the photo.

If you recognize these players, send us a note with identifications.