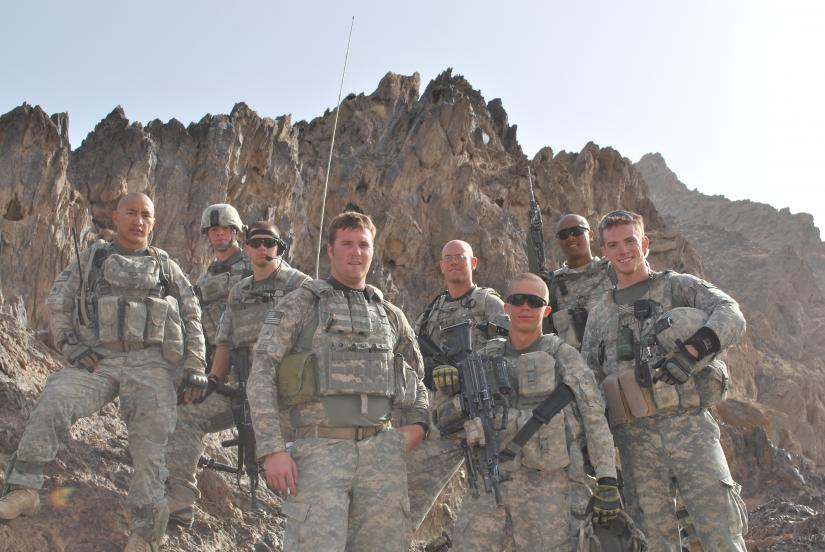 Decorated war veteran Erik Edstrom is on a mission to save his Afghan interpreter from retribution from the Taliban for helping American troops.

Edstrom, a senior fellow at the Eisenhower Media Network and author of “Un-American: A Soldier’s Reckoning of Our Longest War,” was booked months ago to be the guest speaker at a free Zoom webinar on Friday, Sept. 17,  at 7:30 p.m., sponsored by The Salisbury Forum —well in advance of the crisis in Afghanistan.

Edstrom, a Bronze Star recipient, had originally planned to talk about patriotism, and whether or not American’s current brand of patriotism is serving the nation. But current events, his quest to aid his Afghan interpreter and his involvement with #AfghanEvac, has shifted the focus of his upcoming presentation.

The past weeks for Edstrom have been a whirlwind of interviews with media, check-ins with the man he refers to only as “Rock” and constant monitoring of encrypted group chats through the #AfghanEvac Signal channel.

Edstrom graduated from West Point in 2007 — the first class to apply to the academy after the terror attacks of Sept. 11, 2001. He served for two years with the District of Columbia National Honor Guard. Like many young men at that time, he embraced America’s policy of waging a global war on terror. But by the end of his service, he came to feel that war on terror was not just a tragedy, but also a crime.

“I’m in full agreement that the U.S. should be out of Afghanistan,” the veteran explained. “When it was announced that we were going to get out, I punched the air. It’s been a complete disaster for a very long time.”

But within days, his elation turned to anger and disappointment over what he described as the Biden administration’s poorly executed withdrawal from Afghanistan. “We painted ourselves into a horrific corner.”

Edstrom never lost contact with Rock, whom he agreed to sponsor for a Special Immigrant Visa seven years ago.

“My guy got rejected arbitrarily, and it took two years to get an appeal,” said Edstrom, who has spent the past five years monitoring the status of Rock’s application.

He said he has reached out to Rep. Stephen Lynch (D-Mass) to help move the visa along, with no success.

“My latest update was that the administrative processing of SIV’s is continuing,” Edstrom said, calling the process “abysmal.”

Rock is “still stuck …and not due to lack of will or influence or connections.”

Tens of thousands of Afghans served U.S. interests during the past two decades, said Edstrom.

Rock risked his life many times to guide and protect American allies — including Edstrom, who led a platoon of soldiers in Kandahar Province during a deployment to Afghanistan from 2009 to 2010.

“Rock has been living a precarious existence over there for years, hiding from the Taliban.”

Based on their last conversation, “He’s taking it stoically, as Afghans do. They are used to bearing a heavy burden.”

The odds, though, are not in Rock’s favor.

“The best-case scenario,” explained Edstrom, “is that he gets out, and abandons his wife and children.”

His family ends up in a refugee camp, and legal representation is needed to eventually extricate them. “The worst case scenario,” added the veteran, “is that he stays where he is and gets murdered and leaves his wife and children anyway.”

That, said Edstrom, “is the human cost of Americans going to war.”

Edstrom spoke with The Lakeville Journal by phone on Aug. 27 from his home in South Boston, four days before the completion of the U.S. withdrawal of troops from Afghanistan, ending America’s longest war.

Discouraged by what he sees as inadequate government efforts to protect Afghans who supported U.S. military, Edstrom is working now with a group called “#AfghanEvac,” which he teamed up with on Aug. 20, as the Taliban moved back into Afghanistan.

The goal is to smuggle Rock to Pakistan and from there get him either to the U.S. or another safe nation.

“I will put him on a private jet if I have to pay for the seat for him. It’s not over” pledged Edstrom.

#AfghanEvac is a group of about 100 veterans, human rights advocates, private sector employees, members of the intelligence community and others with contacts in Afghanistan determined to help friends and allies escape the reach of Taliban. For many members, it is a matter of honoring promises made and friendships forged.

Of the more than 100,000 people evacuated from Afghanistan, Edstrom said that  “barely more than 5% were our Afghan allies.”

In exchange for aiding American soldiers, he said, Afghan interpreters were promised that their service would earn them freedom once the war ended through Special Immigrant Visas or SIV’s.

“That process has been mired in bureaucratic purgatory,” said Edstrom. “It’s an absolute shit show.”

One member of #AfghanEvan, according to Edstrom, referred to the group’s unfolding humanitarian rescue missions as “Saving Private Ryan: Kabul Edition.”

Find out more about Erik Edstrom and Afghanistan in the Salisbury Forum free Zoom talk on Sept. 17 at 7:30 p.m. Register at www.salisburyforum.org/home-page-events/2021/9/17/erik-edstrom-what-does....