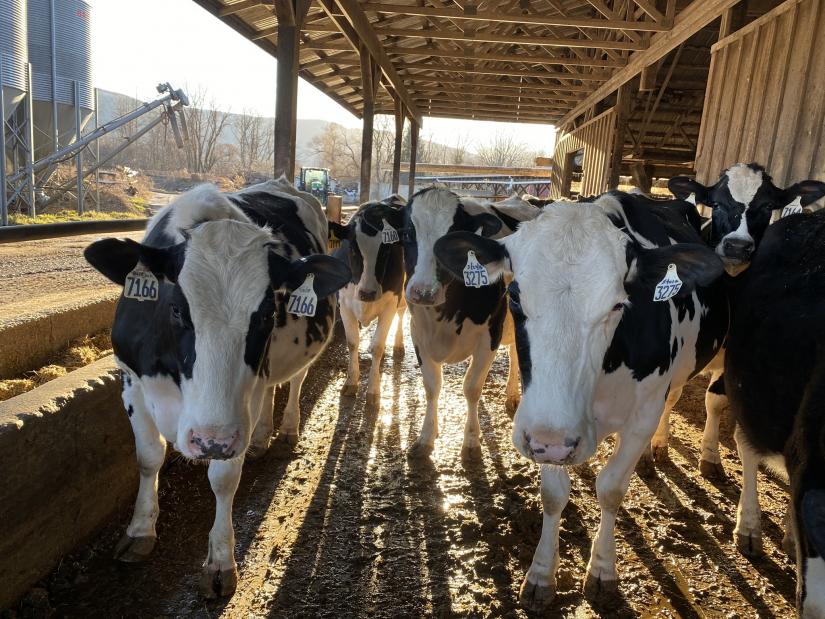 Many dairies in the region are donating milk products to homeless shelters, food pantries and families in need. Photo submitted by Amanda Freund

Regional dairies haven’t had to dump milk — yet

According to Agri-Mark spokesperson Doug Dimento, “A lot of Northeast dairy farms are unfortunately going to go out of business in 2020.”

Agri-Mark is the biggest Northeast-based dairy cooperative in the Connecticut and New York state region, selling products under the names Cabot and McCadam. Their trucks pick up fluid milk from holding tanks in dairy barns and bring them to one of four processing plants to be bottled or turned into butter, cheese, sour cream and the like.

The few small dairies in our region that sell directly to consumers are selling well. Farm stands have been very popular as customers appreciate the opportunity to shop at a distance. However, the majority of local dairies sell to a cooperative that processes and sells their milk.

According to Dimento, “Most dairy farmers are living off their milk check, with the price decided by the U.S. Department of Agriculture.”

“I’ve been in this business since the early 1980s and I’ve seen a lot of tough times in the industry, but this is the hardest,” said Dimento.

Close to half of Agri-Mark’s sales are usually to the food service industry, revenue that has vanished during the stay-at-home orders. While demand for retail cheese has increased, the equipment to process and package those products is already running at capacity.

“Our plants have totally shifted,” said Dimento. “Employees have really stepped up as essential workers. They come to work every day and social distance in the plants. We’ve cut down the number of products we produce so we can shift to products sold in grocery stores rather than to the food service industry. We’ve got milk coming in faster than we can handle it but the climate isn’t right for investment in a change of machinery.”

Dimento is moved by the work that the Agri-Mark  plants’ 900 employees are doing amidst the challenges of the pandemic.

“They have really stepped up, coming to work everyday. We’ve been testing. We have what are called ‘care teams’ at each location that are taking peoples’ temperatures and ensuring social distancing. It’s been a change for everybody.”

Must be used right away

As an extremely perishable product, milk has to be moved within a small window of time. Agri-Mark  has had to tell some farmers in the Northeast to dump milk when trucks were unable to pick it up. According to Dimento, “So far, this hasn’t happened in Connecticut,” although some New York dairies have had to dump.

Melanie DuPuis, chair of Environmental Studies and Science at Pace University and author of “Nature’s Perfect Food: How Milk Became America’s Drink,” said that the dairy processors usually turn as much as a quarter of the milk produced nation-wide into bulk-packaged pizza cheese.

Dairy farmers saw a 35% decrease in prices in the space of a few short weeks.

East Canaan farmer Amanda Freund said that her family’s dairy will continue producing for as long as it can, but that there is no way dairies will be able to cover operating costs without increased support from the government.

“Our food security is our national security,” said Freund. “We need to protect what infrastructure we have to produce food for regional markets.”

Dimento predicts that “there is going to be a shift in rural America if this continues on for another month. Life is going to change in rural New England. Dairy is the number one industry in New England with dairies employing local help, veterinarians and feed dealers.”

“It’s incredibly difficult to see this much stress on people who work so hard every day,” he said. “One positive in northwest Connecticut is that a lot of your dairy farms also have farm stand businesses, which are doing well. Hopefully, consumers’ appreciation for having a local food supply will continue.”

Freund said she is especially grateful that her family has diversified its business over the years. Freund’s Farm Market on Route 44 in East Canaan and Cowpots, the Freund family’s manure-based garden pot factory, are both busier than ever.

Freund’s Farm is one of the few dairies in the area that has survived the low prices of the past five years, contending with everything from trade wars to industry consolidation.

“We’ve gotten used to being as efficient and diversified as possible. There really isn’t any way to tighten further and our other businesses can’t compensate for the losses.”

DuPuis hopes that this could be a moment in which our food system shifts toward a more regenerative, less consolidated approach to agriculture.

“There really needs to be a push at the legislative level.”

Freund sees this as a potentially pivotal moment. “At best, the country will come out the other side of this and there will be a more holistic approach to how we think about our food system.”

Many area dairies including the Jacquiers in East Canaan and other farms that are part of Agri-Mark and Cabot Creamery have been working with the Litchfield County 4-H to provide free dairy products to area homeless shelters, food pantries and families in need.