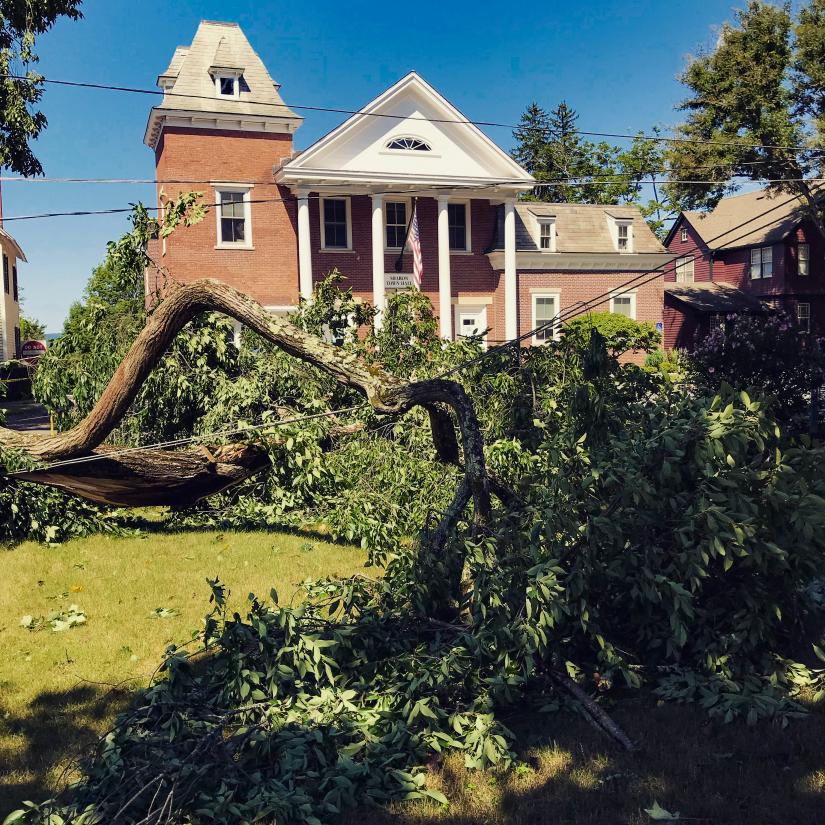 Enormous tree branches and leaders crashed down and entire trees tipped over at their roots, taking down power lines and blocking roads, and leaving the region without power for nearly a week for most users and closing major roads for just as long. Photo by Cynthia Hochswender

As power slowly returns to the area, concerns raised about Eversource

The aftermath of Tropical Storm Isaias, which hit the Tri-state region on Tuesday, Aug. 4, was devastating for many area residents, especially those many who lost power.

The announcements about restoration of power from Eversource were Delphic and required some interpretation. By Saturday the company was promising in emails to customers that “90% of customers will have power on Sunday evening.” But those same emails included a link to a chart with town-by-town estimates that almost without exception estimated that Connecticut towns would have power restored on Monday or Tuesday.

Sharon: one of the last

By Monday morning, Aug. 10, most Northwest Corner residents had their power back on and were even able to use the internet. But a handful of towns here on the town-by-town outage listing still had nearly 50% of customers with no power. The worst hit based on the list seemed to be Sharon (which had 58.25% of its total 2,170 customers still in the dark at mid-day on Monday) and Cornwall (44.34% of its 1,211 customers).

Norfolk was one of the last towns to have power restored, but by Monday only a relatively small 15.56% of the total 1,118 customers were out of power.

North Canaan was one of the first towns to get power restored but by Monday  there were still 14.07% of the total 1,471 customers in the dark.

On Monday morning, Falls Village First Selectman Henry Todd was working through five days’ worth of emails he had been unable to get with the power and internet out in Falls Village. Todd said the remaining power outages were centered around Canaan Mountain Road, parts of Undermountain Road, Johnson Road, Beebe Hill Road and Six Rod Road.

Salisbury First Selectman Curtis Rand said Monday morning that all town roads were now open, thanks to a “round the clock” effort by the town highway crew. According to the Eversource outage map, 646 power customers in Salisbury were still without power as of 10 a.m. on Aug. 10. In Falls Village 282 customers were still waiting.

In Kent, First Selectman Jean Speck had sent out daily updates and was able to announce with great joy on Friday that repair crews had arrived. Many Kent residents and residents of other towns had noted on social media that they had not seen any repair trucks from Eversource.

Many roads remained closed through the weekend, including a section of Route 7 from the Sharon side of the Covered Bridge north to the intersection with Route 112, not far from Housatonic Valley Regional High School in Falls Village. The West Cornwall Road in Sharon (which begins at the Covered Bridge) was also closed throughout the weekend. Motorists were challenged to find their way to and from essential destinations with many roads closed and no planned detours.

Crews from out of state

Photographer Lans Christensen stopped to talk to a work crew from Alabama in Kent over the weekend. They were taking a break from working on lines on Route 7 south of town, and were at the service station in Kent (which was unable to pump gas in the days immediately following the storm, as was the case with filling stations in most area towns).

The workers (from a company called Sparks) told Christensen that they had left Alabama on Sunday and had been working nonstop since Monday, first in Springfield, Mass., and then in Kent.

Jay Dolan, one member of the crew, said it was “one of the worst wind-driven outages” he’d ever seen. “It’s everywhere.”

Eversource also said in its email communications that Isaias was a storm of historic proportions. Crews were called in from “as far away as Canada, Michigan, Illinois, Ohio and Indiana,” according to the news release.

State Rep. Maria Horn (D-64) in an email update sent to her constituents on Aug. 7, said, “I join Governor Lamont, Attorney General Tong, and my colleagues in calling for an immediate investigation into Eversource on their preparation and response to this storm.

“Since major storms in 2011 and 2012, ratepayers have spent millions to strengthen the electric grid and improve communications systems, which all failed during the storm. With some of the highest energy rates in the continental U.S., our constituents and ratepayers deserve better, and Eversource executives must be held accountable.

“This afternoon we had a call with the Legislative Unified Command, on which legislators had the opportunity to hear directly from the utilities. Following that call, I have a prediction for Eversource that might help them prepare for the future: expect hearings, covering both the recent rate hike and the current storm response, followed by significant legislation as early as the September special session.”

Just before the storm hit, Eversource had announced a rate hike for its electric customers. Lamont and Tong had immediately demanded that the rate hike be stopped.

The Public Utilities Regulatory Authority (PURA) temporarily stopped the increase but bills with the higher fees still went out to Eversource customers.

The company says on its website that, “We understand and share concerns that our customers are expressing regarding recent higher-than-normal bills. We recognize that this represents an unexpected and distressing increase during an already challenging time.

“We are working quickly to enact PURA’s temporary suspension of the July 1 rate adjustment that contributed to these bills. We expect these changes will be reflected on your August bill.”

The company also warned that energy usage is higher than normal because of the heat and because many people are working at home due to the COVID-19 quarantine.

According to the website, “this June was 13 degrees hotter than last year.

“Combined with the fact that many customers are staying home due to COVID and using air conditioners, fans and other appliances to stay cool, we saw average energy usage increase 26% over June of last year.”

Eversource gives more detailed explanations of why it tried to raise rates on its website at www.eversource.com (“July 2020 High Bills Concerns). PURA will continue to investigate the fee hike.

Meanwhile, Eversource will continue to work through the remainder of this year to add fiber optic cable and other improvements to power lines in the Northwest Corner. The fiber optic cables are supposed to make it easier for the company to figure out where outages have occurred and to communicate that information to the company’s main offices.