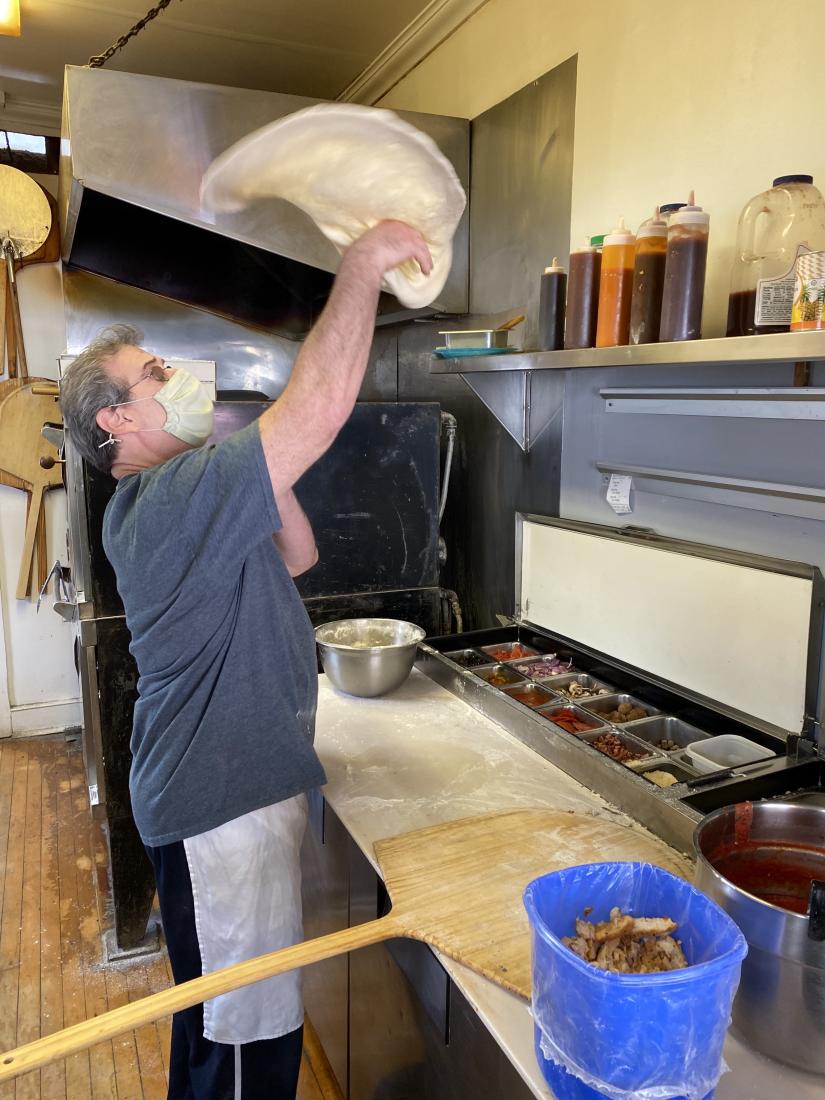 Dean Diamond of Deano’s in Lakeville has had many years of practice at throwing pies in the sky. Naturally, he agrees that Connecticut makes the best pizzas. Photo by Cynthia Hochswender

Pie in the sky, a half-baked idea — or is Connecticut pizza really the best?

Lawmakers have introduced a bill that would designate pizza as Connecticut’s official state food, sparking a Tri-state debate over whose pies reign supreme. In response, Northwest Corner residents and pizzeria owners are defending Connecticut’s savory slices.

“It would be an honor,” said Chris Christodoulou at Stateline Pizza in North Canaan, where his medium-crust pan pies keep customers coming back for more. While the pizzeria owner gave high marks to New York and neighboring Massachusetts for their tasty pies, he said Connecticut chefs offer greater variety and therefore deserve the bragging rights.

“New York should probably go with the hot dog,” he quipped.

It stands to reason that if Connecticut were to have an official food, “I assume it would be pizza,” said Dean Diamond, owner of Deano’s Pizza in Lakeville, during a break from tossing pies into his brick oven to feed highway department crews that were out clearing snow on Feb. 9, National Pizza Day.

Besides, what other state has its own pizza trail, was the setting for the 1988 blockbuster movie, “Mystic Pizza,” and lays claim to the No. 1 pie in America?

Diamond has been making pizza since the mid-1980s, when he served as an apprentice at a pizzeria in Long Island, N.Y. He said although the New Haven area hogs the spotlight when it comes to prestigious pies, the Northwest Corner delivers when it comes to quality.

“I’ve had people from New Haven come here, and say we’re better,” said Diamond of his thin crust, hand-spun, Neapolitan-style apizza [pronounced “ah-beetz”]. “New Haven has the popularity, but we have the better pizza.”

The legislation, House Bill No. 5656, was recently proposed by state Rep. Patricia Dillon (D-92) and Sen. Gary Winfield (D-New Haven). No half-baked idea here. The bill’s goal is to “recognize the contribution of pizza to the state’s cuisine and economy.”

Just last week a newcomer joined the Litchfield County pizza scene. Goshen Pizza fired up its ovens in the Village Marketplace on Torrington Road on Feb. 8 for its first day in business.

Just a few miles over the Sharon border in the heart of Millerton, Taro’s Pizzeria and Restaurant draws customers from throughout the Berkshires and beyond. Owner Peter DelCantaro is a devotee of the traditional thin, crispy, somewhat charred New York-style pizza that he has offered at his establishment for decades.

He noted that while New York is famous for its pizza, the Empire State is “overblown” with Neapolitan-style pie — so on the basis of creativity, he said, Connecticut deserves the accolades. “Overall, they have it,” said DelCantaro, who hinted that he may soon break with tradition and introduce stone-fired, artisan pizza to his Millerton eatery.

At Four Brothers Pizza Inn in Amenia, N.Y., siblings John and Paul Stefanopoulos, said pizza is already eponymous with New York. “It’s New York’s state food. You guys should get the hot dog — or the condiments,” jested John. “There are a few spots in Connecticut that we know are hot, but New York has more diversity, and a stronger following.”

Just for the record, the official state food of New York is the apple.

Speaking of followings, said Paul, many of Four Brothers’ regular customers travel from out of state to get a taste of their savory pan pizzas, or the popular margherita pie, made with oil from the Stefanopoulos family’s own olive groves in Greece. “There’s a strong pull from Connecticut.”

The Stefanopoulos family emigrated from Greece in early 1970s, and opened their first pizzeria, Brothers Pizza, in Lakeville, from 1972 to 1974. Four decades later, their business comprises nine sites, including one in Great Barrington, Mass.

“We’re sticking to our guns,” said John. “New York is the king of pizza!”

In Kent, creativity rules when it comes to “za” (an abbreviated term for pizza coined by the preppie subculture in the 1980s). This small, rural community is home to several diverse pizzerias, including Kent Pizza Garden, Cozzy’s and Swyft, all of which feed the appetites of the town’s boarding school students.

While New Yorkers claim that it’s the water that puts their pizzas over the top, some in Connecticut claim that it’s a combination of the locally sourced ingredients, and a crop of talented chefs, behind the state’s coveted slices of heaven.

At Swyft, Neapolitan-style, wood-fired, farm-driven pies, with their thin crust and puffy, blistered edges (which are made possible by a Pavesi oven made in Naples, Italy) lure pizza purists. The crust is natural sourdough, made from a 30-year-old starter. Toppings, including cheeses and meats, are sourced from Kent’s Rock Cobble Farm.

State Rep. Maria Horn (D-64) also credited the state’s farming industry with helping to elevate pizza’s humble reputation. “We have a lot of farms here,” noted Horn. “I am a pepperoni and mushroom girl. But I’m picky, the mushrooms have to be fresh.”

Once the news broke of Connecticut’s quest to crown pizza as its official state food, a Twitter war erupted, sparked by cheesed off neighbors from the Empire and Garden states.

“NO,” was the simple comment left by the account @NJGov following the Constitution State’s announcement. “I’m incredibly proud to be Governor of the Pizza Capital of the World,” Phil Murphy, Governor of the Garden State, said in a follow-up tweet on National Pizza Day.

And just for the record: the official state food of New Jersey is the blueberry.

One New York pizza devotee chimed in: “LOL! Really? We got that covered in New York, and it’ not even our state food. You have some good pizza for sure, but your state’s food?? It’s in our water!”

Even Amy Holden Jones, the screenwriter for “Mystic Pizza,” jumped into the social media fray to defend Connecticut. “As the person who sat down and wrote #mysticpizza, I endorse this move,” she tweeted.

Pizza: The circle of life

Horn, who lives in Salisbury, said the “light-hearted rivalries and back-and-forth verbal jousting between Connecticut pizza and other states’ pizza” is all in fun and comes at a time when people can use some levity in their lives.

A gooey, bubbly slice of pie, she said, provides comfort not only to the stomach, but to the soul, “particularly in this moment when we are all missing the communal dining experience. It’s a way to connect.”

While the 64th District state representative admits to being a pizza traditionalist at heart, her son has a more adventurous palate and prefers his pie topped with chicken and ranch dressing. It’s a bonus, she said, that there are three popular pizzerias in her home town to satisfy her family’s diverse cravings.

“Pizza is something that has Italian roots,” said Horn, “but it really has become an American thing. It’s a language that everybody speaks and it allows for a lot of creativity.”

The holy trinity of crust, cheese and sauce makes pizza not only irresistible, but affordable, especially for those low on dough. “I ate a lot of pizza as a student to save money for grad school,” the lawmaker recalled.

No matter how you slice it, there is a lesson to be learned from the great 2021 pizza debate: You can’t make everybody happy. You’re not pizza.