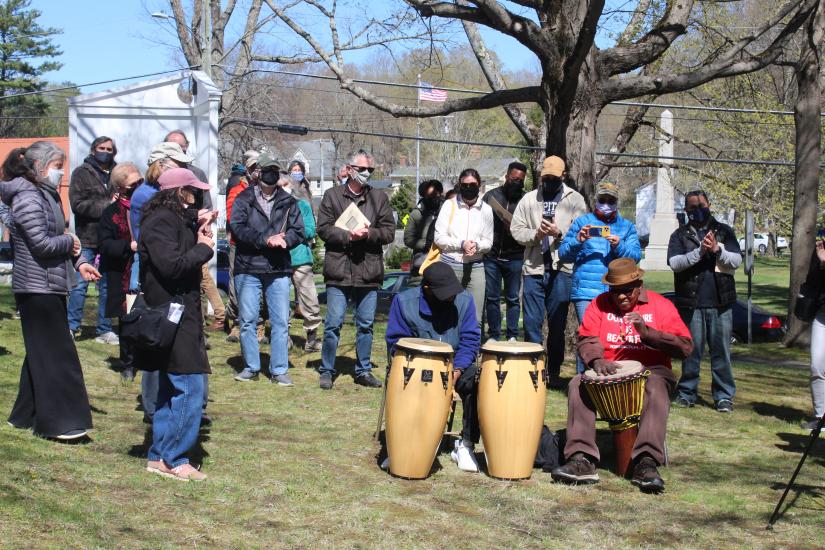 The ceremony honoring James Mars on Sunday, May 2, ended with drumming led by Angaza Mwando, at right. Photo by Patrick L. Sullivan

NORFOLK — The life of James Mars was celebrated at the Norfolk Congregational Church on Sunday, May 2, with a ceremony marking the unveiling of a witness stone honoring Mars, the last slave bought or sold in Norfolk.

Students from Salisbury School, under the guidance of history teacher Rhonan Mokriski, put the event together as part of a new course, “Searching for Slavery in Salisbury.”

In a Zoom interview Monday, May 3, the students described the considerable logistical effort needed to bring together U.S. Rep. Jahana Hayes (D-5), state Rep. Maria Horn (D-64), state Sen. Kevin Witkos (R-8), Dennis Powell of the Berkshire County, Mass., branch of the National Association for the Advancement of Colored People, Angaza Mwando of Our Culture is Beautiful of Torrington, and the Rev. Cleo Graham, pastor of Faith Congregational Church in Hartford.

The students’ efforts were assisted by a grant from the Berkshire Taconic Community Foundation.

The Rev. Erick Olsen of the Norfolk Congregational Church welcomed the crowd, which the Salisbury School students counted at 115.

Brendan Cassamajor, one of the students, said the May 2 event was the result of a school year’s worth of planning.

The Norfolk church and the Norfolk Historical Society were particularly helpful. The witness stone was provided by the Witness Stone Project.

Slavery was abolished in stages in Connecticut, starting with a prohibition on the importation of slaves in 1774, and the 1784 Gradual Abolition Act. The final legislative action, “An Act to Prevent Slavery,” was passed in 1848.

Mars wrote a short autobiography, which was republished by the Norfolk Historical Society. (Copies were available at the May 2 event.)

Horn thanked the students for their work. “We think we know our history,” she said, adding that is important “to go back and look at it.”

She then read a proclamation from Gov. Ned Lamont making May 1, 2021, James Mars Day.

Witkos said he had walked past a portrait of Mars in the state capitol for years without paying much attention.

“So this project of Salisbury School had an effect on me,” he continued. “We can’t move forward unless we understand the past.”

Right up until the start of the ceremony, Olsen and the students weren’t sure if Hayes was going to make it.

But sure enough, about 45 minutes into the event, Hayes, accompanied by her husband, appeared in the crowd.

Hayes, a former teacher, said she was “thrilled” by the students’ project.

“We can be intentional about educating ourselves,” she said. “We’re making a conscious effort to be better.”

Graham led the audience in a prayer, the stone was unveiled, and the event wrapped up with drumming led by Mwando.

The Salisbury School students are working on other projects, including a documentary on the Cesar family of Salisbury and Sharon.

“This is just the beginning,” Cassamajor said of the “Searching for Slavery” course. “We’ll keep building on this. James Mars is just a portion of it.”