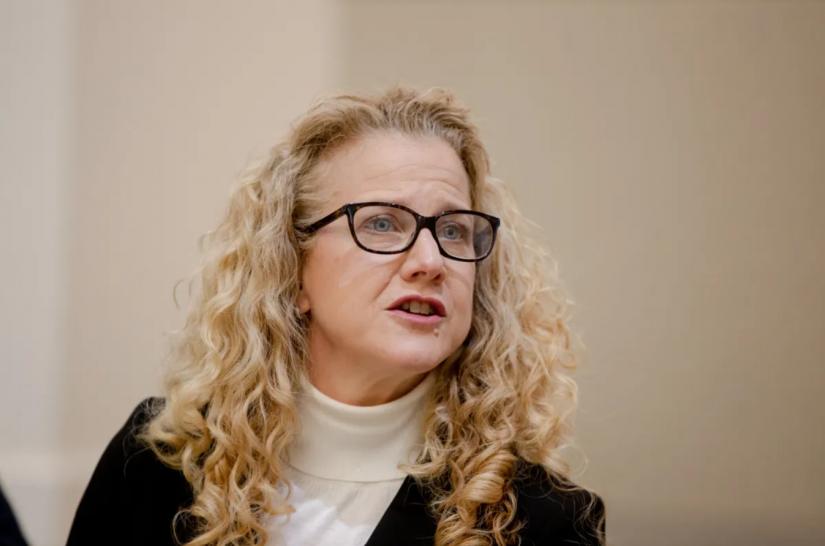 Amanda Skinner, president and CEO of Planned Parenthood of Southern New England, said her organization is preparing for a “surge” of patients from out of state. Photo by YEHYUN KIM / CTMIRROR.ORG

With overturn of Roe v. Wade, CT gears up for a surge of patients seeking abortions

June 29, 2022
By
Jenna Carlesso, CT Mirror
“We have already seen patients having to travel thousands of miles from Texas to receive safe legal abortion care in Connecticut.” — Amanda Skinner, President and CEO of Planned Parenthood of Southern New England

They expect — even hope — the message will be read as an invitation by those who lost their access to reproductive services Friday when the Supreme Court overturned Roe v. Wade, ending the constitutional right to abortion after almost 50 years. Following the announcement of the court’s ruling, nine states immediately banned abortion, and seven more have trigger bans that will take effect in the coming days.

Medical providers with Planned Parenthood of New England said they are planning accordingly and expect a “surge” of patients from out of state over the coming months. Abortion remains legal in Connecticut and Rhode Island.

“We are anticipating that we will see a continued surge in patients here in Connecticut, as abortion is legal, as we have the ability to provide abortion services at all of our health centers in Connecticut,” said Amanda Skinner, president and CEO of Planned Parenthood of Southern New England. “We are accessible by airports; at a number of our health centers, we have airports within 20 or 30 minutes. We are working furiously with our colleagues across the country … to make sure we have as seamless a system as possible for patients who need access to care.”

Skinner was quick to point out that not everyone will be able to afford this option, however, and that the Supreme Court’s action will land most squarely on low income people and communities of color.

“The ability to travel thousands of miles is not something that’s available to all people. These bans cause disproportionate harm to people who live in poverty, people who live in rural areas, Black and brown communities — any communities that are already disenfranchised from the health care delivery system and marginalized in this country. It is devastating to think that where somebody lives is going to determine whether or not they have access to care,” she said.

Skinner said Planned Parenthood already has seen an influx of patients traveling from Texas since that state adopted Senate Bill 8 last year, banning abortions after six weeks except in cases where there is a medical emergency.

“We have already seen patients having to travel thousands of miles from Texas to receive safe legal abortion care in Connecticut … and we have every reason to believe that as abortion bans are passed across the country, this will continue,” she said.

The Connecticut General Assembly in April passed a sweeping bill strengthening the state’s existing abortion laws. In addition to providing a legal “safe harbor” to women from places with restrictive laws who get abortions in Connecticut — and the clinicians who perform them — the measure expands who can perform first-trimester abortions. Beginning July 1, advanced-practice clinicians such as APRNs and physician assistants are allowed to perform abortions by suction, also known as vacuum aspiration. Suction is the most common method of in-clinic abortions and can be performed by clinicians other than doctors in 14 other states.

“Our advanced-practice clinicians will now be able to train in firsttrimester aspiration procedures, and we’re preparing to make that training happen,” Stanwood said.

Rep. Jillian Gilchrest, D-West Hartford, a key supporter of the recently passed legislation, said she was saddened by the Supreme Court decision Friday.

“My hope is, if it hasn’t already started, that training will be underway for the expanded provider types who are able to perform aspiration abortion and that Connecticut can provide women across this country with the reproductive health care that they need and deserve,” she said.

“My daughter and I are in Washington, D.C., today. She’s 10 years old, and I can’t help but look at her and think about the future for her and her generation and what this means to so many women who will not be able to access the reproductive health care they so desperately need.”

“People of color have historically experienced disproportionately poor health outcomes and poor treatment in the health care system, and today’s ruling will likely have an outsized effect on people of color who will find their health care choices further constrained,” said Tiffany Donelson, president and CEO of the Connecticut Health Foundation.

“Already, women of color have worse outcomes in maternal health, regardless of socioeconomic status. In Connecticut, Black women are 2.6 times as likely as white women to die within six weeks of childbirth,

according to the state Department of Public Health. Changes that make it more difficult for people of color to make decisions about their reproductive health only stand to worsen inequities.

“We are fortunate that Connecticut has taken steps to preserve the right to abortion in the state. It will be critical to monitor access in the coming years.”

Outside of access to health care, the ruling will have other implications as well, advocates noted.

“The inability to choose whether or when to have children undermines a woman’s ability to finish high school or college. Educational attainment and earnings are linked,” said Janee Woods Weber, executive director of the Connecticut Women’s Education and Legal Fund. “So the decision of whether or not to have children affects lifetime economic stability and security. Those are the kinds of decisions that can have generational impacts as well, especially when considered in the context of the income gaps and wealth gaps that already exist for women of color.”

“Let me be clear that this decision to criminalize access to a safe abortion will cause more harm to Black, brown and low-income women across our nation and their loved ones,” added Frances G. Padilla, president of Universal Health Care Foundation of Connecticut. “Women have the wisdom to decide for themselves. Political barriers to care are harmful and discriminatory.”

Even as many decried the ruling Friday, others celebrated. Several antiabortion groups in Connecticut said they were galvanized by the decision, despite abortion remaining legal in the state.

“We’re overjoyed,” said Peter Wolfgang, executive director of the Family Institute of Connecticut. “Regardless of the fact that it doesn’t immediately change anything for Connecticut, the overturning of Roe v. Wade is what pro-lifers have prayed for, marched for, worked for, voted for, for 49 years. And now we’re going to do the same thing in Connecticut to hopefully overturn the 1990 law that still keeps abortion legal here.”

“Today, with the U.S. Supreme Court reversing the 1973 Roe vs. Wade decision on the right to abortion, we enter a new era of opportunity and responsibility to safeguard life and protect the most innocent among us,” officials with the group said. “We welcome this historic reversal, which affirms the right to life of an unborn child and we pledge to do all that is possible to support pregnant women who face serious challenges.”

As medical providers and pro-choice advocates contemplate a future without the protections of Roe v. Wade, some are calling for more action from Connecticut’s lawmakers.

“Over and over again, we see the intersections of harm that happen in our systems. And the most impacted people are poor, marginalized, often Black and brown people,” she said.

Constant also asked legislators and others to fight efforts to undermine reproductive care in their communities.

“Abortion care is one part of reproductive care and has honestly become synonymous with reproductive care,” she said. “When you start to see shutdowns on one thing, you can see shutdowns across the board. And that’s happening right here in our state. It’s important for our legislators to pay attention to what’s happening g locally so we can build up our defenses on a statewide level.”

The Journal occasionally will offer articles from CTMirror.org, a source of nonprofit journalism and a partner with The Lakeville Journal. A longer version of this story appears online at www.tricornernews.com.