New faces at The Lakeville Journal

We hadn’t expected to have any interns this summer, but several young people contacted us in late spring to ask if they could participate, and two chose to join us for three weeks. You’ve seen their bylines in recent editions, and we hope they will continue to write for us through the summer when they can.

We have also invited them to return next year, when we hope the world will be somewhat normal again, and when we can offer our full internship program.

This year, Anabelle Baum and Mary John, both high school students in New York City with part-time residences in Sharon, received some guidance and practice in writing articles in the Associated Press newspaper style; and they did a workshop by Zoom with Senior Associate Editor Alexander Wilburn, who taught them how to craft a story “pitch” to an editor and how to prepare questions for an interview.

In a normal year, we work intensively with our interns over a minimum of three weeks in four areas: Reporting (including writing and photography), copy editing, page design and civics.

We try to get them out and about in our towns so they can meet new people and get a better understanding of how New England democracy functions. We take them on tours of town halls and introduce them to some of the many town officials and staff who keep things ticking along so efficiently.

One of the most important things we do is teach them to trust their own instincts and their own writing “voice.” Students for the most part are rigorously trained to write in the specific style of their teacher and/or their school. It usually takes a week or more before we convince them that we genuinely want to hear about what interests them, and we want them to write in a style that is informal and natural to each of them as individuals.

Anyone who is interested in joining us next year for an internship (or this year for an abbreviated program) is invited to email me at cynthiah@lakevillejournal.com.

One task we assign our interns every year is that they have to interview and photograph their fellow interns. Read their articles, below, to learn about this year’s interns. 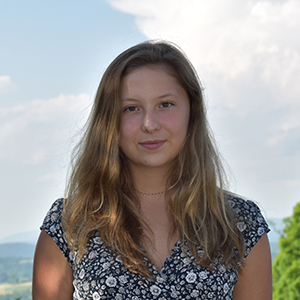 SHARON — Mary John joined The Lakeville Journal for three weeks as an intern this summer.

In the fall, she will be a senior at Trinity School in New York City. She lives in the Upper West Side of Manhattan with her parents and with her two siblings: Kate John, a rising junior at Bowdoin College in Maine, and Will John, who will be in his final year of elementary school at Trinity.

For the summer, Mary is living at her home in Sharon. Also in Sharon this summer is the family’s golden doodle, Indiana, and a new golden doodle puppy named Macie (after Macedonia Brook State Park), who joined the family on Friday, July 3.

Outside of school, Mary plays club volleyball with the NYC Juniors volleyball club.

She became interested in journalism upon taking a semester-long course in the spring studying how The New Yorker magazine works.

Her goal for her internship at The Lakeville Journal was to learn how to write concise and impactful articles, formulate good interview questions and learn more about her community along the way. 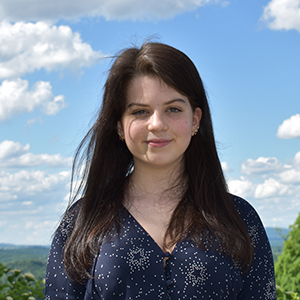 SHARON — Anabelle Baum is a rising junior at the Trevor Day School in New York City. She lives on the Upper East Side of Manhattan with her parents and her younger sister, Lizzie Baum, who will be a ninth-grader at Trevor in the fall.

Anabelle is living in Sharon for the summer. She has taken classes on journalism, and she is the editor in chief of her school paper, The Trevor Dragon.

Her goal for her internship at The Lakeville Journal was to learn more about taking newspaper-style photos, conducting good interviews and writing concise articles.

She joined the paper for three weeks hoping to learn a new style of writing and to become a better journalist.