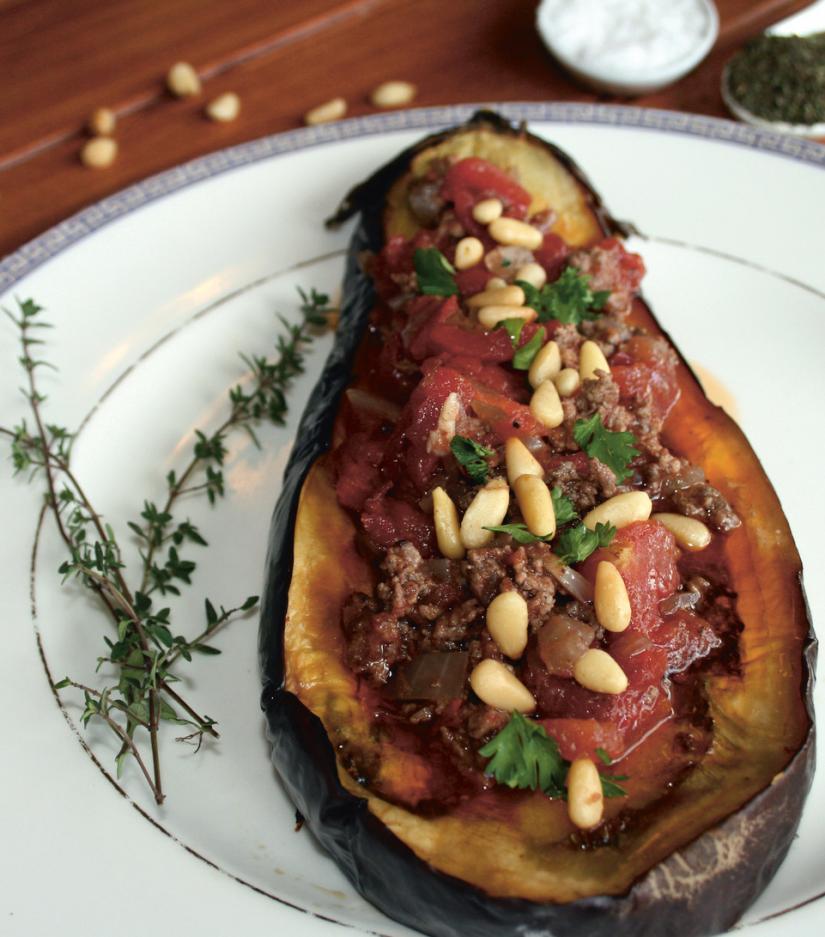 Long before there were the famous eggplant recipes from the celebrity chef Yotam Ottolenghi, Ralph Nader’s mother was cooking delicious Lebanese eggplant dishes such as Sheikh al-Mahshi (photo above, baked eggplant stuffed with lamb and pine nuts) and other Middle Eastern specialties. Photo courtesy Akashic Books

Nader’s new cookbook — and warnings on a COVID-19 world

April 15, 2020
By
Cynthia Hochswender
cynthiah@lakevillejournal.com
“One of the most important parts of the book is the way my mother got me to eat fresh foods without complaining. That’s worth the whole cost of the book.” — Ralph Nader

WINSTED — Ralph Nader is at home now in Winsted, not at his other residence, in Washington, D.C. — and his mother is on his mind.

Rose Nader died in 2006 at the age of 99, but her memory lives on in the lives and hearts of her four children, especially her son, Ralph, the consumer advocate and one-time presidential candidate.

That memory is especially vibrant right now, with the publication by Ralph of a cookbook called “The Ralph Nader and Family Cookbook,” that is largely an ode — in recipe form — to his mother and the skillful way in which she raised her children to be mindful, just citizens and good, healthy eaters.

Like many children of immigrant parents, Nader recalls that the food cooked lovingly in his home would have seemed alien to the point of being repugnant to his classmates at elementary school in Winsted.

Certainly his family was capable of cooking good old American fare: His father was the chef/owner of a popular Winsted eatery called the Highland Arms for nearly 50 years.

In the cookbook’s introduction, Nader writes that the food at the restaurant was traditional, and, certainly, “The menus at the restaurant affected our eating at home mostly at breakfast — oatmeal, pastries, poached eggs, and jam.”

Nader doesn’t even make a point of saying that the ingredients in those days were (of course!) locally sourced. His father made fresh ice cream with dairy products from the local farms; he brought home bushels of fresh fruit picked at nearby orchards.

But the food that really impacted Nader’s life — and his future career as a crusading advocate for fresh, healthy food — was the Lebanese food that his mother cooked at home, and that she insisted that everyone in her family eat, together at the table, while they discussed the issues of the day.

“One of the most important parts of the book is the way my mother got me to eat fresh foods without complaining,” he said in a phone interview last weekend. “That’s worth the whole cost of the book.”

That cost, by the way, is $25. It was released on April 7 and can be purchased at Amazon.com.

“It would make a wonderful Mother’s Day gift,” he said, which of course is a classic ruse for selling books — but in this case, it’s appropriate, as this cookbook really is all about a mother and the loving but firm care she took of her children and her spouse.

The recipes in the book, for dishes that seemed so exotic when Nader and his siblings were growing up, have become familiar in this day in age, thanks in part to the popularity of the British/Israeli cook and writer Yotam Ottolenghi.

The recipe list in the Nader book includes hummus, yogurts (called labne in the Lebanese tradition), dishes made with Mediterranean grains (tabouleh, kibbe). There’s not much beef but there is fish, lamb and lots of vegetables.

When asked for a favorite from the list, Nader said without hesitation that it is the eggplant dish called Sheikh al-Mahshi, or “the king of stuffed food.” A small eggplant is filled with ground lamb and other savory ingredients.

“Top it with tomatoes, a sprinkling of parsley, pine nuts,” Nader said. “It’s juicy, it’s easy to prepare and delicious. It’s the best; I’ve always liked it, since I was a child.”

That is the dish, he said, that his mother would prepare for him on his birthday.

Many of the recipes are downright “regular,” including side dishes that feature for example cooked beets or broccoli with olive oil and lemon juice and maybe some garlic.

This Mediterranean-inspired cooking has become the new normal in much of America. The luscious photos in the book take even common foods and makes them, well, cookbook-worthy. The photos were by Torrington food photographer Wendy Pernerewski.

The recipes for the book were, for the most part, prepared by George Noujaim, chef/owner of the popular Noujaim’s Bistro in Winsted, which proudly serves the ethnic cuisine that the Highland Arms didn’t dare fuss with back in the day.

“In those days you didn’t mess around with hummus or yogurt,” Nader commented.

Most of the photos for the book were taken at the bistro, and Noujaim contributed recipes for soup and a smoothie. (The restaurant remains open for takeout during the quarantine; go to www.noujaimsbistro.com.)

Meanwhile, back in D.C.

Lest one forget that this casual Saturday phone conversation about food and memories and mother was with Ralph Nader, the talk eventually turned to the government, the coronavirus and banking.

Nader and his sister Claire have been in residence in Winsted for the past month. Normally they commute back and forth between here and Washington, but, “There is no going back now,” he said, adding that, “You’re better off in a rural area.”

Senators and congressmen, on the other hand, should be at work in the nation’s capital at a time like this.

“Pelosi is on the job but all the rest of them have gone home,” he said. “What does that mean, that Congress doesn’t consider itself an ‘essential business’?”

Many of the elected representatives are using their time at home to visit beleaguered constituents, but Nader feels that’s not a good use of their time.

“Their job is in Washington,” he said. “They’re laying out trillions of our dollars, there are no public hearings, there’s no oversight.

“This is not a time to go around reassuring people, they can have other people do that. They need to be at the helm and they’re not there.”

Nader warned that American consumers need to be extra vigilant now in watching out for scams.

“That’s what happens when there’s a crisis: The criminal element comes out and the government doesn’t have the capacity to keep track of it. People have to be careful.

“There’s going to be an outbreak of torts,” added the founder of the American Museum of Tort Law, on Main Street in Winsted. “It’s the perfect storm.”

He cited President Donald Trump as an example.

“For his whole life he’s been a debtor and in bankruptcy,” Nader said. “He always wants low interest rates.”

Meanwhile, he said, interest rates on loans that Americans need to repay, such as college loans, have sky-high interest.

This is the topic that gets Nader most hot under the collar at this point, and he recommends that Lakeville Journal readers follow this link to the column he wrote about it recently, "The Federal Reserve dictatorship runs amok against savers."

And of course, he recommends that you buy his new book, “The Ralph Nader and Family Cookbook,” online or ordered from a local bookstore for curbside pickup.

From “The Ralph Nader and
Family Cookbook”

Use the smallest eggplants available (very small ones are cooked whole, while medium ones, preferably on the small side, are cut in half lengthwise). Serve with long-grain brown rice.

Wash (and trim the stems from) the medium eggplants; leave small eggplants whole. Partially peel them in alternating 1-inch strips, leaving half the skin on. Cut them in half lengthwise, and steam over medium heat in a covered saucepan for 15 to 20 minutes, until the skin is soft enough that you can indent it with a poke.

Spread a thin layer of olive oil on a 9-by-13-by-2-inch pan. Place the steamed eggplants in the pan.  If using small eggplants, cut each cooked eggplant lengthwise.

Let them cool before stuffing.

Thoroughly combine the raw ground lamb and onions (or grind them together in a food mill). This should make about 2 3/4 cups.

Cook the lamb and onions in a saucepan with cinnamon, salt and pepper, over low heat, stirring to avoid sticking. Add pine nuts after 5 minutes. Cook for 10 to 12 minutes, until the pink is gone from the lamb. Remove from heat.

While the stuffing is cooking, gently boil the fresh tomatoes in an uncovered saucepan with 2 cups of lamb broth for 10 to 15 minutes, until soft and juicy.

Optional: For a decorative effect, cook the cherry tomatoes in the tomato/broth mixture so you can put them on top of the stuffed eggplant. Strain and set aside.

Firmly stuff the lamb filling into the eggplant boats until they’re full. Place a generous portion of tomatoes or cherry tomatoes on top of each eggplant boat.

Spoon the tomato/broth mixture around the eggplant boats, filling the pan but not overflowing the top of the eggplants. Reserve some of the liquid to add while the eggplants bake.

Remove the eggplant boats from the pan and serve on a bed of long-grain rice. Top with pan drippings as desired.