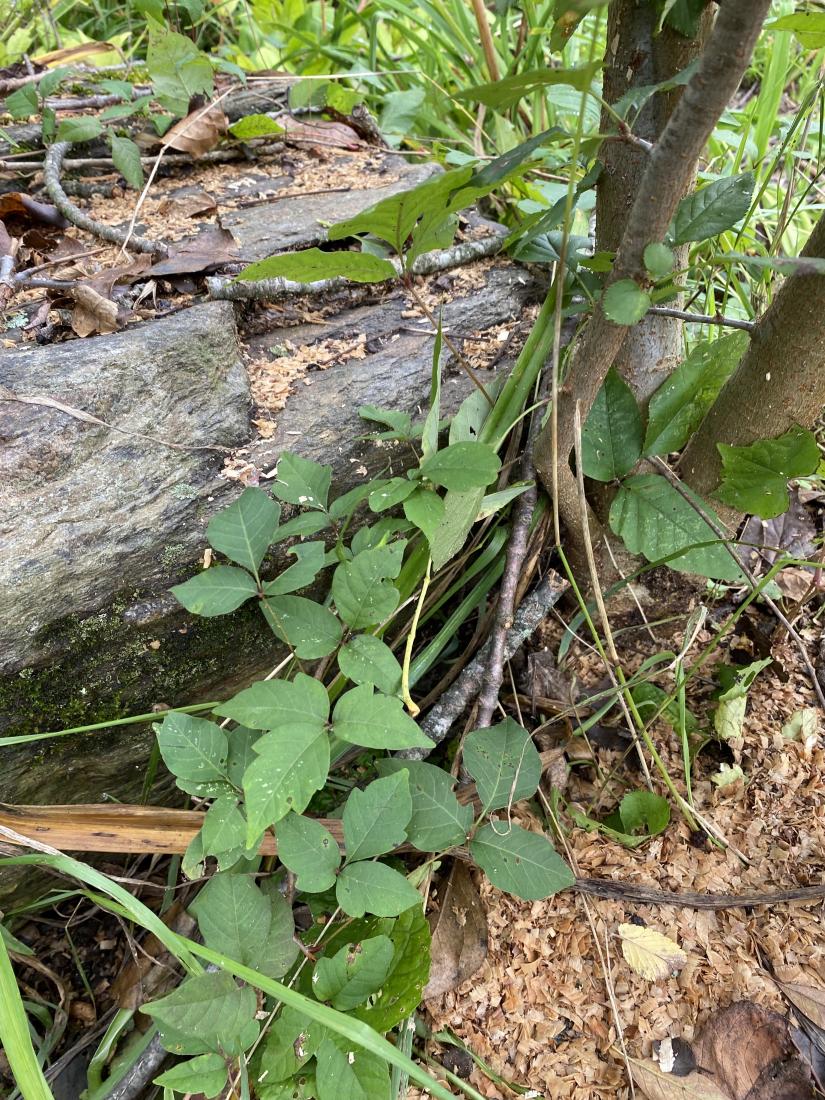 Part of the sneakiness of poison ivy is that it’s hard to recognize, even though (of course) there are always three leaves. This small patch was photographed in August; the leaves were green not red (as sometimes happens). Photo by Cynthia Hochswender

Leaves of three, let it be, or ‘you’re gonna need an ocean of calamine lotion’

October 13, 2021
By
Mac Gordon
“You can look but you better not touch, Poison ivy, poison ivy, Late at night when you’re sleeping Poison ivy comes a-creepin around.” “Poison Ivy” by the Coasters

One of many memorable pop novelty songs from the 1950s, “Poison Ivy” was particularly memorable for those with first-hand experience with this plant’s insufferable itch.

Poison ivy (Taxicodendrun radicans) and its cousins poison oak (Taxicodendrun diversilobum) and poison sumac (Toxicodendrun vernix) are found throughout the lower 48 states. In North America, exposure to these three plants causes more cases of allergic contact dermatitis than all other plant families combined, affecting as many as 50 million Americans each year according to some estimates. People of all ages, ethnicities and skin types are vulnerable. The rash typically lasts one to three weeks.

An unremarkable looking vine, poison ivy is sometimes confused with Virginia creeper (Parthenocissus quinquefolia). The mnemonic rhyme “Leaves of three, let it be” describes the characteristic appearance of poison ivy in its warning.       And as most nature guides remind us, it is worth taking a little extra time to study pictures of poison ivy before venturing into its habitat. It has become so widespread in the Eastern United States and Canada that one may run into it most anywhere (a West coast variety is also toxic).

An oily substance that causes a rash

All three plants exude an oily substance when touched: Urushiol causes an allergic reaction in four out of five people. Urushiol is in the leaves, stems, and roots of these plants. This oil can be found in many other plants such as mango skins  and gingko fruit, but only poison ivy, oak and sumac seem to cause a serious problem for people.

Experts are agreed that one’s best defense against poison ivy is to learn what it looks like and avoid it. Since it tends to commingle with other weeds, gardeners should be especially careful when weeding it, doing so with disposable gloves; clothes that touch the plant should be thoroughly washed. Urushiol, even from dead plants, may remain toxic for years. Poison ivy weeds should be carefully disposed of separately, not composted.

People are warned not to eat the fruit, berries or leaves of poison ivy. However, it appears to provide a satisfying meal for many animals including deer, raccoons and rabbits. Many species of birds eat the seeds/fruit including robins, bluebirds and sparrows.

Poison ivy gives an itchy rash to people and to apes, but not to other types of animals (although hardly any other animals expose a significant amount of bare skin, and this may be the reason that they are not affected).

Poison ivy spreads by suckering from its long root system at the surface of, or just below, the ground. Birds eat the seeds and expel them later in their droppings, thereby facilitating the erratic yet widespread distribution of the plant.

Poison ivy grows most everywhere; it thrives in nearly any type of soil both wet or dry and is happy in full sun or shade. It is often found in disturbed ground where it’s usually an early colonizer.

Eradication of a large area of poison ivy is generally a job best left to professionals. The most popular herbicide, sold by Monsanto/Bayer and containing glyphosate, may be one of the less dangerous, but the company is still defending itself against  many multi-million dollar lawsuits challenging its product’s safety. As with any pesticide, users should follow manufacturers’ instructions and be very careful. Remember, even a slight wind is apt to carry pesticide spray to unwanted locations.

Destruction of poison ivy by burning is not a good idea; inhaling the smoke may cause internal reactions worse than that from skin contact. The massive western wildfires, worse this season than ever, are producing even more toxic smoke as large quantities of poison ivy burn.

Higher temperatures and more carbon dioxide in the atmosphere are stimulating the growth of poison ivy and its cousins. Not only are poison ivy plants growing larger than before but also the urushinol inside the plants seems to be becoming even more toxic.

The greater supply of CO2 and the increased global temperatures have combined to help create giant poison ivy vines which, more and more, are beginning to dominate their surroundings. Even now the larger  vines are often climbing to the top of forest canopies. Big trees are choking on these  huge, supercharged vines.

While calamine lotion, the old standby over-the-counter medicine cited by The Coasters in their song, remains a popular remedy to help relieve the itch, many other topical creams and lotions are available. In severe cases consultation with a pharmacist or doctor is advisable.

Editor’s note: The Lakeville Journal’s Patrick L. Sullivan, who spends many hours climbing around in the woods while seeking trout, recommends  Fels-Naptha soap. He breaks the long bar in half and puts one half in a  resealable plastic bag and takes it with him when he’s out in the woods. If he feels there is any chance he’s brushed up against some poison ivy or other toxic plant, he immediately rubs the soap and some water on his skin, and then bathes with the Fels-Naptha or with another excellent product called Teknu when he gets home.

He warns not to get any Fels-Naptha in your eyes (“It is not pleasant,” he stressed). And he warns not to use calamine lotion, which doesn’t do anything to stop the spread.