Skip to main content
THIS WEEK'S DIGITAL EDITIONS
Home / Home
Home » Lakeville Journal Regional » Jobs are back, but where are the workers? 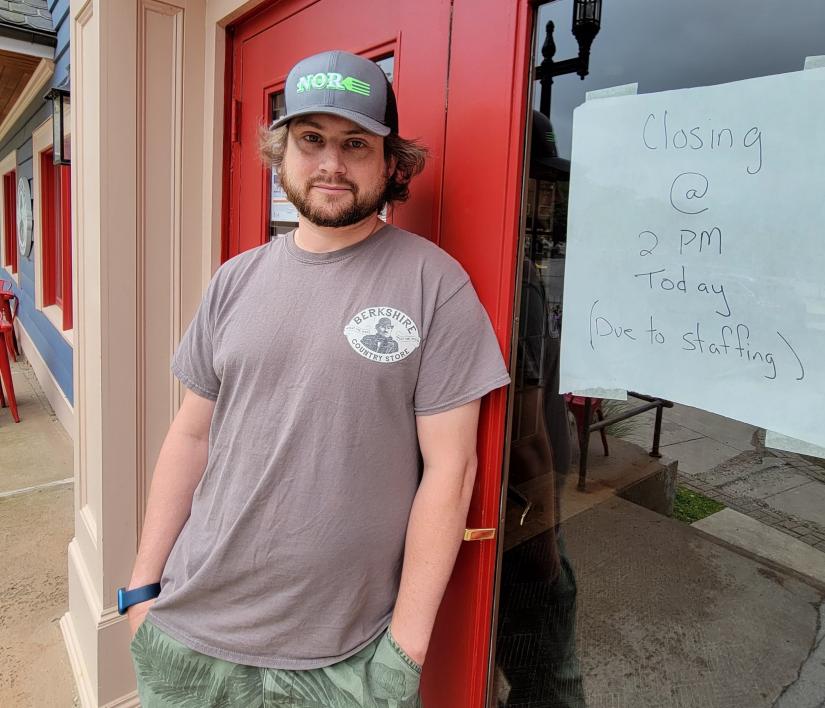 Ryan Craig, owner of Berkshire Country Market in Norfolk, posted a sign on the door of his business alerting customers to early closing hours due to a staffing shortage. Photo by Debra A. Aleksinas

Jobs are back, but where are the workers?

July 13, 2022
By
Debra A. Aleksinas
"Job losses are not the issue for the Northwest Corner or the rest of the state, it’s the difficulty finding workers to fill jobs that threatens the state’s economic recovery." — Chris DiPentima, president and CEO of the CBIA

This is the first of a series about the labor market in the Northwest Corner.

Already battered by pandemic shutdowns and the economic downturn, Craig has been unable to find workers to fill positions at his two businesses.

He is not alone. Across the Northwest Corner, employers large and small, for profit and nonprofit, across all sectors, are wondering the same thing: where have all the workers gone? What was once a crisis of customers, has turned into a crisis of employees.

Not only is there is shortage of applicants for open positions, but the competition for the dwindling labor pool has reached unprecedented heights, said business owners. Many workers are quitting their jobs, but they are being hired elsewhere.

“I just lost an employee to Mountainside. He had been with me for eight years. I couldn’t compete,” with the salary he was offered, said Craig, who just a year ago had 17 employees between his two locations, and is now down to six at the Norfolk site. “I haven’t hired anyone in four months. I used to interview 10 people a month.”

For the most part, workers who quit a job last year and are now employed somewhere else see their current work situation as an improvement over their most recent job, according to statistics compiled by the Pew Research Center.

At least half of these workers say that compared with their last job, they are now earning more money (56%), have more opportunities for advancement (53%), have an easier time balancing work and family responsibilities (53%) and have more flexibility to choose when they put in their work hours (50%).

“The pandemic changed workers’ attitudes toward their jobs, with generational attitudes also driving profound changes in workplaces across the country,” said Chris DiPentima, president and CEO of the Connecticut Business and Industry Association (CBIA), the state’s largest business organization.

“Employers across the state and country are responding to this major shift, implementing remote and hybrid work, greater flexibility, enhanced compensation and benefit packages.”

According to the May jobs report issued by the Connecticut Department of Labor (DOL), the labor market is showing continued gains. “This month we saw good news from the food services and hospitality sectors, trends we hope will continue as we head into summer,” said DOL Commissioner Danté Bartolomeo in making the announcement.

The report showed a drop in the unemployment rate, down 0.2% to 4.2%. Employers in the state added an estimated 1,600 jobs, and weekly unemployment filings “ticked up slightly due to seasonal layoffs,” according to the DOL, and are now just above 17,000.

While the state touts progress within the labor market, Main Street is hurting.

If jobs are back and the unemployment rate is trending downward, then what’s the problem, employers are asking? One reason is that the jobs reports don’t take into account the high rate of voluntary turnover in all sectors. Workers are quitting their jobs but many are rehired elsewhere. They may be seeking a different career path, better pay and perks, a safer work environment or one that allows a hybrid work schedule. The Great Resignation has become the Great Reshuffle of 2022.

“Job losses are not the issue for the Northwest Corner or the rest of the state. It’s the difficulty finding workers to fill jobs that threatens the state’s economic recovery from the pandemic and growth prospects,” said DiPentima in an interview with The Lakeville Journal in late June. “The workforce crisis is a sign that Connecticut’s economy is not recovering as fast or at the pace it could be.”

The labor shortage is a national issue, although it is more acute in Connecticut, and particularly in the state’s rural Northwest Corner, said the CBIA official. Since February 2020, Connecticut’s labor force, the number of employed residents plus those actively looking for work, has declined by 55,700 people, or minus 2.9%.

“We have 110,000 job openings in the state, yet if every unemployed person found a job tomorrow, 31,300 jobs would remain unfilled.”

“Connecticut’s aging workforce, long-term inability to better coordinate education curricula and workforce development programs with employer needs, and the state’s high cost of living and high costs of doing business all play a role in the current crisis,” he said. “Keep in mind that Connecticut was one of a handful of states that failed to recover all jobs lost in the 2008-2010 recession.”

The lack of affordable housing and transportation options are also major concerns and are contributing to the worker shortage, said the CBIA official, “particularly over that last mile in suburban and rural areas like the Northwest Corner and especially for people in underserved communities.”

And the state’s initiatives touting “family friendly” mandates, such as minimum wage hikes and paid FMLA/paid family and medical leave legislation, have been a gut punch to many small businesses.

As Andrew Markowski, state director of the National Federation of Independent Businesses (NFIB) noted in 2019 when his organization objected to the then-proposed FMLA mandate: “How is a small business supposed to stay in business when it is possible for nearly its entire workforce to be out on leave for up to three months at a time?”

Healthcare job postings outpaced other sectors in May

May saw a surge in Help Wanted online postings, according to the DOL. Total postings of 106,633 statewide represent an 8% rise over April.

Occupations with the most postings were Registered Nurses (4,499), retail salespersons (2,865), wholesale and manufacturing sales representatives (2,288), and heavy and tractor-trailer truck drivers (2,258).

“If these jobs remain unfilled, then businesses cannot meet that record demand for their products and services,” said CBIA’s DePentima. “The resulting domino effect, sending customers out of state or giving Connecticut companies little choice but to move and expand elsewhere, brings potentially disastrous consequences.”

In April, state business leaders and organizations called for policymakers to use federal pandemic relief funds to address the unemployment debt crisis threatening the state’s economic recovery. They urged the Lamont administration and lawmakers to prevent pending unemployment tax hikes on employers, which will jump 22% by 2026.

Connecticut Retail Merchants Association president Tim Phelan said retailers of all sizes endured a challenging two years, and the threat of tax hikes makes it tougher to remain in business.

Craig, at Berkshire Country Market, said lawmakers have further burdened small businesses by mandating minimum wage hikes. Connecticut’s minimum wage increased by another $1 to $14 per hour on July 1 and will hit $15 next June.

The Norfolk businessman said he has no choice but to “change his thought process” when hiring employees, and that means sidestepping entry-level, inexperienced teenagers who once made up about a third of his workforce.

“I don’t see a short-term solution,” said Craig. “How much can I raise the cost of a roast beef sandwich?”

“It’s where the rubber meets the road,” said State Rep. Maria Horn (D-64), commenting on the wage hike and its impact on small businesses in the Northwest Corner.

“There is some restriction in the labor market, which I think is healthy, but it does make it hard on small businesses, which are the lifeblood of our area.

“We have, in this country, pushed wages down, down, down. Just to make a living people are working three jobs,” said Horn. “People are saying, 'Enough, I want to earn a decent wage.' ”

Coming Next: The Summer Scramble