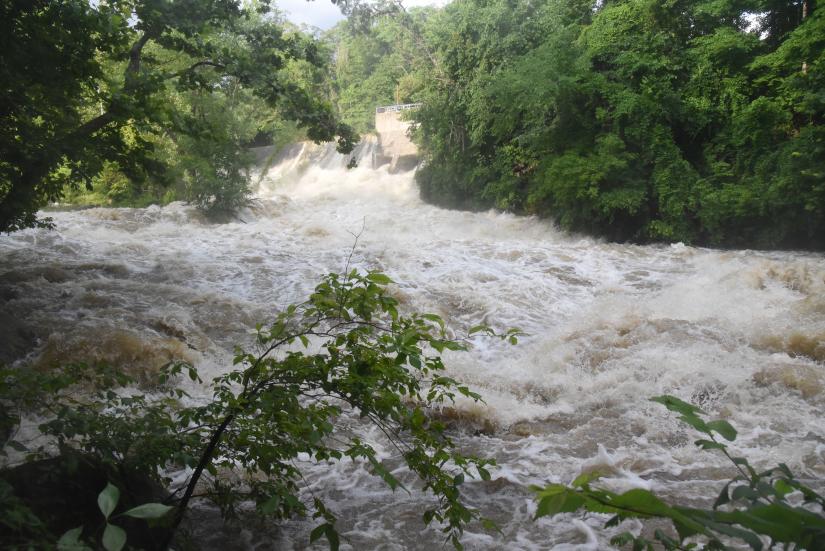 The falls at Bull’s Bridge in Kent this weekend were running fast and hard after days and days of rain and a major thunderstorm on Saturday night, July 17.  Photo by Lans Christensen

It’s the ‘North-wet’ Corner this week

There was no need to consult online charts over the weekend to know that the heavy rainfall had caused flooding: All you had to do was drive around the Northwest Corner to see submerged yards, battered footbridges and swollen creeks.

Needless to say, the Housatonic River at Gaylordsville near Kent was at flood stage after the thunderstorm on Saturday night, July 17.

As of Monday morning, July 19, the United States Geological Survey (USGS) gauge farther north, at Falls Village, had the river flowing at 6,010 cubic feet per second (CFS) and rising. Median flow for this time of year is between 300-400 CFS. Flood stage is 7,000 CFS at Falls Village.

The CFS is a measurement of the water discharge level and is an important indicator of river safety. It tells you how fast and how hard the water is charging through, between the river banks.

The gauge height tells you how high the river level is. On Monday morning in Falls Village, it was 7.24 feet. Flood stage at that part of the river is 7 feet.

The precipitation gauge at Falls Village showed that between July 12 and the morning of July 19, about 4.5 inches of rain fell.

The USGS data from Gaylordsville, about 26 miles south and downstream of Falls Village, told a similar story. On the morning of July 19, the river was at 8,260 CFS (median flow there for July 19 is between 500 and 600 CFS).

The National Weather Service issued a river flood warning at 8:30 a.m. on Monday, July 19, to remain in effect until Wednesday afternoon, July 21. The warning predicted the river would peak at 8.5 feet on Monday afternoon, with subsequent minor flooding.

All of which tells residents what they already know: The river is very high.

Unlike spring high-water events, when the river tends to drop fairly rapidly after the rain stops, midsummer flooding takes much longer to recede.

In the spring, much of the excess is used up fairly quickly by thirsty plants. But in mid-July, when it rains hard for a period of several days, the water has nowhere to go but downhill, and into the Housatonic.

The Housatonic River is never an easy river for anglers and recreational boaters —which is why anglers and boaters like it. At normal flows, it is challenging. At or near flooding, the river is extremely dangerous and should be avoided.