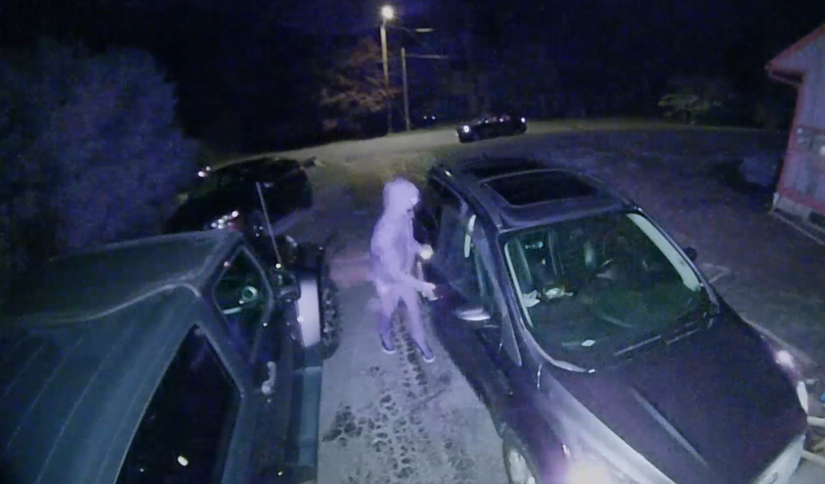 Several Salisbury residents reported last week that someone entered their vehicles and searched for items to take. This photo was taken with a security camera on a home in Lakeville. The car by the roadside is owned by the family; the thief was walking along the road from house to house. Photo courtesy Robert Riva

Hows and whys of car thefts

We ran this article in our issue of July 23 but felt it deserved to be printed again in the wake of break-ins last week in Salisbury.

Christopher Sorrell, the resident state trooper for Salisbury, said on Monday, Aug. 17, “They will enter any car that is unlocked looking for valuables and other random items, and steal most any car that has the keys in it.

“If they come across a better car, then they dump the stolen one and grab the one they may like better or may fit their needs better.

“This is a criminal enterprise that travels to the Northwest Corner and to neighboring states to commit crimes. The stolen vehicles are often used to commit other crimes and further their criminal enterprise. They target random neighborhoods, usually in the middle of the night.

“Numerous towns were affected. I am sure they will be back.”

Just before the coronavirus pandemic, the state of Connecticut created an auto theft task force to try and figure out why so many cars were being stolen statewide and who was stealing them.

Since the creation of the force on Feb. 1, “the task force has recovered 154 stolen cars, eight stolen firearms and a badge from a local police department,” according to a press release from the State Police. “Detectives have arrested 22 juveniles, totaling 59 felony arrests for larcenies, illegal possession of weapons, etc. One person was arrested for operating a drug factory; crack and fentanyl were seized.”

The auto thefts are in no  way an urban problem. Earlier this summer, the police at Troop B  warned area residents to leave their cars locked and empty at night.

This week, Realtor John Harney Jr. reported that his own car was stolen from his driveway in the very rural northern section of Salisbury known as Taconic.

The report from the State Police explained how the thefts are being carried out, and why.

“The task force found that automobiles are stolen in an organized, directed manner,” according to the news release.

“The suspects, many of them juveniles, travel to the suburbs from all major Connecticut cities. They go with anywhere from two to six people, possibly more, in a car. The cars they are traveling in are frequently stolen themselves.”

The gangs travel to suburban and rural areas usually early in the morning before sunrise.

“They check for unlocked cars in driveways and on streets to search for firearms, valuables (laptops, phones, purse, and wallet), money and car keys,” according to the news release.

“Typically, if they encounter a locked vehicle or one without keys inside, they quickly move on to the next automobile.”

The stolen cars are driven back to urban areas and parked and locked. The thieves keep the keys, often in a remote location.

The cars are then “rented” for use in crimes by other gangs.

“The suspect either keeps the keys or hides them near the parked car,” according to the news release. “The cars are then marketed via social media and smart phone apps to other persons for criminal purposes. An agreement is struck online or in-person, and the location of the car/keys is provided.

“These cars are used for preplanned shootings/assaults, drug trafficking, human trafficking, stealing other vehicles, etc. At this time, the evidence does not support that these crimes are committed for a ‘joyride’ or as a result of ‘bored juveniles.’”

Locking your car, keeping it empty and holding onto the keys might not deter a thief from stealing your vehicle. However, it certainly decreases the likelihood.

The State Police advised that property owners should “lock all vehicles at all times and remove all valuables (laptops, phones, firearms, cash, etc.) every night. These individuals are committing more crimes — and increasingly more serious crimes — with these stolen cars and the items taken from them, including firearms.

“Make this your mid-year resolution: remove all valuables, grab the keys and lock the doors so that you are not the next victim in our state.”