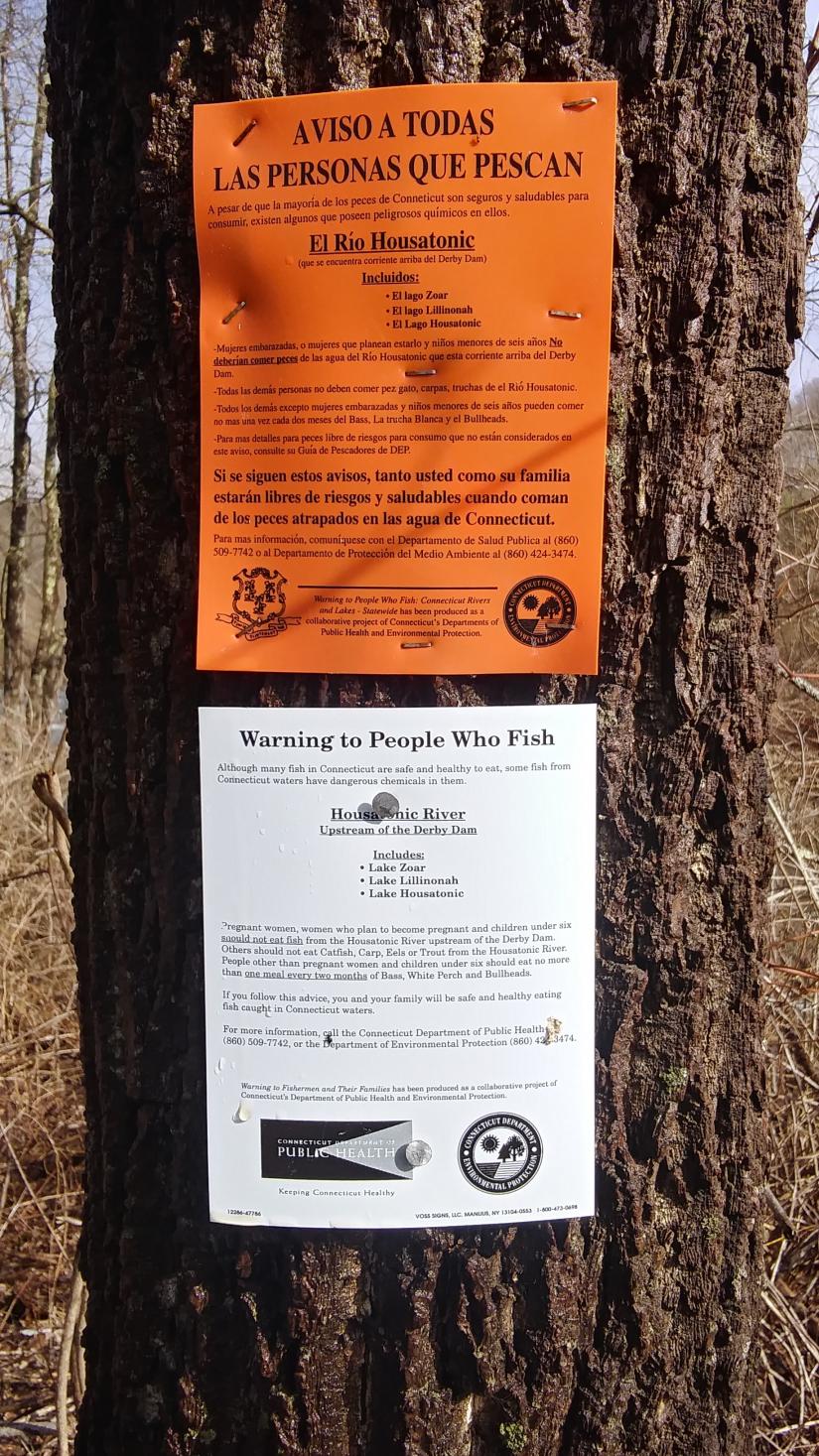 Signs warning about eating fish are posted along the Housatonic River. Photo by Patrick L. Sullivan

EPA will now monitor PCBs along river in Northwest Corner

A “significant sampling” of PCBs from the Housatonic River along several Northwest Corner communities is slated to begin later this month and continue throughout 2022, according to Dean Tagliaferro, project manager of the Rest of River remediation plan for the U.S. Environmental Protection Agency (EPA).

Tagliaferro gave an update on monitoring planned this year in Massachusetts and Connecticut.

“In Connecticut, a fair amount of activities are proposed for 2022,” including sediment and adult fish sampling in the areas of the Route 7/Lime Rock Station Road Road bridge between Falls Village and Salisbury,.

Tagliaferro’s comments were made during a two-hour meeting of the agency’s Housatonic River Citizens Coordinating Council (CCC) held via Zoom on March 30.

The council meetings are designed to update the public on the General Electric Co.’s (GE) ongoing cleanup of PCB contamination in and around the Housatonic River originating from its Pittsfield, Mass., facility. [See article in the March 31 issue of The Lakeville Journal.]

“A sampling plan has been approved for the floodplain, riverbed and sediment at the confluence of the East and West branches of the Housatonic River, all the way down to the line between Pittsfield and Lenox. We’re hoping to cover all the different seasons,” said Tagliaferro.

“It could take a full year,” and additional EPA personnel, to collect the more than 10,000 samples needed to determine how much remediation is needed, he said.

The EPA official said outreach activities will be held throughout the process in both Massachusetts and Connecticut. Documents are available on the EPA website and are open to public input through April 22.

Among the documents related to Connecticut is a 2021 annual report on Biota Consumption Advisory Outreach Activities from GE dated Feb. 28, 2022.

John Kilborn, EPA Senior Enforcement Counsel, presented an update on the Final Rest of River Permit status, which became “fully enforceable and effective” on March 1.  On Feb. 28, the EPA had issued a letter to GE upholding the conditions of the Final Permit requiring the company to move forward with extensive cleanup of PCB contamination impacting several downstream Massachusetts river communities.

In late March, however, a representative of The Housatonic River Initiative (HRI) said his group, in conjunction with the Housatonic Environmental Action League (HEAL), plans to launch a second legal challenge the EPA’s final permit, this time in Federal court.

The environmental groups argue that the EPA should be looking at new technologies for the cleanup that would break down the long-lasting PCBs, rather than removing and dumping them on-site at a massive dump in Lee, Mass. They also argue that Connecticut should be included in the final cleanup plan.

Audrey Cole, vice chair of HEAL, which comprises a large contingent of members from Connecticut, voiced concern at the meeting that not enough is being done by the CCC to promote public outreach and participation.

“I think the EPA has really done a horrible job of public participation,” said Cole. “I don’t even know to what level this meeting was advertised. In response, Kelsey Dumville, EPA’s Community Involvement Coordinator, said she is aware of that concern, and “we are working on sending separate emails to press outlets. I feel similarly,” she said. “I get the sense that there are a lot of people in the public who are not aware of what’s going on.”

Charles Cianfarini, speaking on behalf of the group Citizens for PCB Removal (CPR), agreed that public outreach needs to be improved. “The EPA owes it to this community to push to get more information out there about these meetings and to get more people involved.”

Members of the CCC said they are hoping that the group’s next quarterly meeting in June could be held both in person and remotely so as to encourage more robust participation.

The meetings are attended by representatives of EPA, the Connecticut Department of Energy and Environmental Protection (DEEP), numerous environmental groups in Massachusetts and Connecticut, affected landowners and other members of the public.