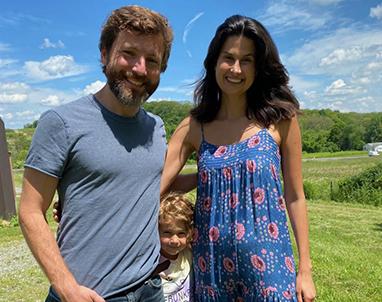 The new owners of the landmark Ellsworth Farm in Sharon are Graham Stanton, at left, and Kristy Foss and their daughter, Lieve. Photo by Leila Hawken

Expecting to write a new chapter in the history of the Ellsworth Farm, Kristy Foss and Graham Stanton are the new stewards of the 76 acres of land that comprise the old farm.

“It’s been a family farm for a long time,” Foss said during an interview on Monday, June 13, remembering past generations of owners.

The farm originally  belonged to the Dunbar family of Dunbar Road. For about 20 years, the farm was owned by Bill Vitalis, who operated the farm as a commercial apple orchard, shipping nationwide.

More recently, over the past two decades, the farm was owned by Michael Bozzi, who expanded the berry operation and welcomed the public to visit the farm.

The landmark property had become a significant destination for its orchards, pick-your-own berries and a variety of other produce, featuring hayrides and other autumn favorites  for children and families, including the pumpkin patch and corn maze.

Situated just across Dunbar Road from their home, Ellsworth Farm was for sale for a few years, Foss noted.

“Our number one priority was protecting the land,” referring to the expanse of land on both sides of Route 4. They purchased the farm property in late 2021 for $2.7 million.

“One of the reasons we wanted to move here was the community,” Foss said, adding that she and Stanton had been coming to the area for six years,  first in Falls Village and then in Sharon.

Their professional lives as technology entrepreneurs, specializing in tech startups, are centered in New York City, but along with daughter Lieve, who is 5, they are spending substantial time locally with home improvements and overseeing natural rejuvenation of the land.

While they are coming to know more about the property, Foss said that there has already been one pleasant surprise.

“We knew the barn was nice, dating back to the 1700s,” but they have come to discover that the upper part of the solidly constructed old barn is a huge open space with exposed timbers. “It was being used for storage, but it has amazing potential,”

“We’re taking time to restore the barn and the land,” Foss said, adding that they want to take that time to understand what’s best for the land within its environs.

“A moment to pause,” put succinctly by Stanton, “and to assess,” Foss said in agreement. “We are evaluating everything about the land, and letting the land rest,” she added.

“Graham and I are big on natural maintenance of the land,” Foss said, having realized that they and the land are part of a community. During the summer months, they plan to become better connected within the Sharon community.

“We’re thrilled to have bought it,” Foss said.

“History is important to us,” they both agreed. “We don’t want this story to end.”