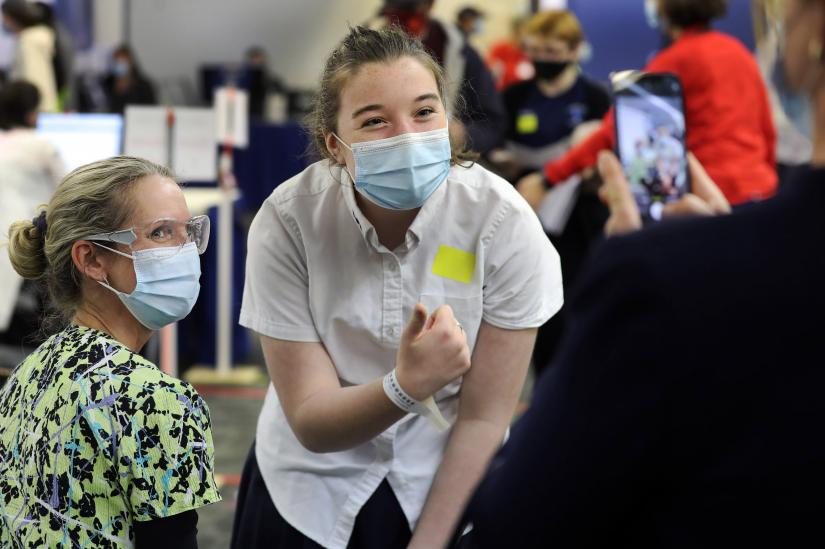 The Boston Globe newspaper has shared content with other publications around the U.S. that is meant to reassure Americans that vaccines are safe. Photo Boston Globe

COVID-19 Notebook: Myths and facts about the vaccination

Last Tuesday, Aug. 18, the Boston Globe newspaper published a special section dedicated to reassuring Americans that COVID-19 vaccines are both safe and necessary. Other newspapers across the country were invited to take part and to share some of the Globe’s content.

Because we are a weekly newspaper that comes out on Thursdays, we did not participate on the same day as other publications; but we share one of the stories, below, from the Boston Globe this week.

MYTH: The COVID-19 vaccines were developed too quickly to be safe.

FACTS: It’s understandable that people would have this concern. The vaccines were rolled out in record time, two of them using a novel technology. The government entity that led the effort was even called “Operation Warp Speed.”

But in reality, the mRNA technology behind the Pfizer and Moderna vaccines had been in development for nearly two decades, and a key feature of the technology is its ability to make vaccines quickly.

In testing the vaccines for safety and efficacy, no corners were cut. The same process was followed as with any vaccine, but to speed things up, drug companies performed different phases of the research simultaneously, instead of sequentially. Volunteers quickly signed up. And the drug manufacturers started making the vaccine even before they knew whether the vaccine would be authorized, so doses were ready right away.

In deciding to allow the vaccines for emergency use, the FDA had ample evidence from studies involving tens of thousands of volunteers. And in the months since, after millions have taken them, the vaccines have continued to demonstrate their safety and efficacy.

FACTS: That rumor sprang up, most likely, because two of the vaccines use genetic methods that most of us don’t understand — the messenger RNA, or mRNA. But you don’t need a course in genetics to grasp this simple fact: The mRNA vaccine cannot affect your DNA because it never gets near it. It enters the cell, but has no access to the nucleus where the DNA is stored.

Instead, the mRNA instructs cells to make the coronavirus’s “spike protein,” which triggers the body to create antibodies. The mRNA quickly dissolves and so does the spike, but the body’s own antibodies remain, poised to attack the real coronavirus should it appear.

MYTH: COVID-19 vaccines can cause infertility.

FACTS: Not true. The rumor apparently emerged from another misunderstanding of human biology. An incorrect report on social media said that the spike protein on the coronavirus is the same as another spike protein involved with the growth of the placenta, falsely asserting that vaccines could attack the placenta. But that’s wrong. The two spike proteins are completely different, and the vaccine does not attack the placenta or affect fertility.

FACTS: There’s no mystery. The ingredients in the vaccine are listed on the CDC’s website. They include typical vaccine ingredients, such as a fat capsule to protect the mRNA, salts and a little sugar. They do not include fetal lung tissue or microchips to track you. Those are conspiracy theories with no basis in fact.

In the rare cases when vaccines cause problems, they are identified within two months, usually within days.

MYTH: Young and healthy people are better off trusting their own immune systems than risking taking the vaccine.

Look at what’s happening around the country. COVID-19 is surging among unvaccinated people. In communities with low vaccination rates, thousands are getting sick and dying, and hospitals are running out of intensive care beds. Previously healthy young people have been put on ventilators and some have died. Many who survive COVID-19 — 10 percent to 30 percent — endure lingering symptoms, especially fatigue and mental fogginess that prevents them from working.

Compare that with the side effects of the vaccine. Some people feel a little feverish or tired for a day; most have no symptoms beyond a sore arm. Severe allergic reactions occur in one in 100,000 shots, but manifest instantly and can be quickly reversed with medication; that’s why you have to be observed for 15 minutes after inoculation.

The severe illnesses associated with COVID-19 vaccines — blood clots and heart inflammation — are extremely rare after vaccination. Both those conditions are much more likely to happen as a result of coronavirus infection.

And yes, it’s true that young healthy people often suffer only mild symptoms from COVID-19 (although, again, some do get very sick). But you don’t live alone on a tropical island, and even if you’re doing fine, you can infect someone else who won’t do well. Do you really want to be responsible for making a loved one or even a stranger deathly ill?

Nothing in life is risk-free. But COVID-19 vaccination is one clear case where the benefits far, far outweigh the risks.

Thanks to the Boston Globe for sharing their research