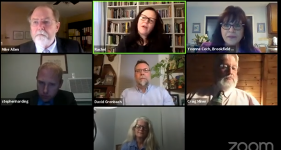 Homes are being snatched up at an unprecedented rate in Litchfield County, often above asking price. Buyers, many in panic mode and some armed with cash, are slugging it out in bidding wars as available inventory shrinks. Sellers are seizing this moment to get top dollar for their investments, and in all this, brokers are running from pillar to post.

“It’s like New York at its peak. No one has seen anything like this,” said broker Ira Goldspiel of William Pitt Sotheby’s International Realty in Kent and Salisbury. “The last few weeks we have had a lot of panic buying. It hit Realtors first, and now the lawyers are probably drowning, there are so many closings and inspections. It’s intense.”

Tri-state region broker Elyse Harney Morris, co-owner of Elyse Harney Real Estate in Salisbury, took a pause from her frenetic schedule in mid-July to reflect on the burgeoning market.

“Oh my gosh, there aren’t fast enough sneakers for me!” she said in a phone interview. “This week we had our largest week of closings ever. The market has never been stronger.”

Sales surge in Salisbury
and Sharon

According to a second quarter Market Watch by William Pitt-Julia B. Fee Sotheby’s International Realty, the 12-month median selling price for single family homes in Litchfield County shot up 7% to $253,000

The data also shows that the  inventory of available houses is down by 30% from a year ago.

“It’s all good news, especially the high-end” market, according to John Harney Jr. of Sotheby’s Salisbury brokerage, who noted that in Northwest Corner it is Salisbury and Sharon that are contributing the most to the growth.

“One of the reasons Salisbury and Sharon are particularly attractive is that taxes there are low,” explained Patricia Best, founder of Best & Cavallaro Real Estate in Salisbury, which merged with William Pitt Sotheby’s in 2019. “Salisbury has one of the lowest tax rates in the state.”

“May and June combined had 31 sales, more than any back-to-back months in at least 10 years,” Harney said.

So, what is behind the uptick in home sales? A number of factors, Realtors said, resulting in an unexpected economic upside (for many property owners and for sales agents and attorneys) to the coronavirus.

“COVID-19 has driven home sales outside the city to extremes,” said Goldspiel, who reported getting four offers on a South Kent home listed at $895,000 that was “just sitting around” for months before the pandemic hit.

“I have a home in Warren, on Brick School Road, listed at $750,000. I put it up Sunday night so that no one would bother me to see it, and I showed it four times on Tuesday, twice yesterday and twice today,” Goldspiel said last Thursday, July 17. “On Saturday I plan to have a block of showings, and most likely will get full price.”

Record-low mortgage interest rates, fueled by the economic turbulence, have also motivated people on a limited budget who may have previously been hesitant to enter the home-buying market, said area Realtors. According to the Federal Home Loan Mortgage Corporation (also known as Freddie Mac), rates during the week ending July 9 reached a record low of 3.03% for a fixed-rate, 30-year loan, which can take hundreds of dollars off a monthly mortgage payment.

The Litchfield County housing market started out strong in January and February of this year, said Morris.

“We were putting things under contract. And then came March,” and with it a surging pandemic, “and the world stopped.”

Within weeks, the rentals dried up, and the housing market exploded.

New Yorkers afraid of contracting the coronavirus fled the city in droves once the city’s lockdown eased, creating what Graham Klemm, president of Klemm Real Estate, called a “sea change”: an influx of younger, first-time homebuyers with either school-aged children or no children, escaping the city.

“Definitely younger families is what is fueling the trend.” It started, she said, with summer camps and family vacations getting canceled by the quarantine. All of a sudden, houses with swimming pools, big yards and extra space to fit home offices, extended family members and live-in help were in demand.

“Your home is now your oasis,” Goldspiel said.

Another trend the agents noted is that empty-nesters who traditionally sought to downsize to a city apartment or relocate to the sunny southern states have decided to stay put, and not put their house on the market.

And then there are homeowners nearing retirement who may have planned on waiting a few years before selling their homes, but changed their minds.

“Because inventory is so low, it’s a great time to sell and take advantage of the active market. They know there may not be a better time to get a strong offer on the property,” said Morris.

“Even people in the high-end market who were never thinking about selling are reaching out to sell properties now. We, as brokers and Realtors, are thrilled they are adding inventory in the area.”

In many ways, said Klemm, Litchfield County’s housing market is, and has historically been, insulated from economic downturns.

“Even in recessionary times, some people can afford not to sell,” noted Klemm. “Regardless of what’s going on in the rest of the world, Litchfield County always marches to the beat of its own drum. It’s really a micro-market within a market. There is a class here that can afford to do whatever they wish. They are their own decision makers.”

Industry experts say they see no end in sight to the housing boom, which could strengthen rural communities by adding new students to the schools, new volunteers to town boards and commissions and economic growth.

“While it is a seller’s market, the buyers are thrilled that they get to become a part of our community,” said Morris. “The schools are playing a very strong role. Indian Mountain School in Lakeville has had a record number of applications and acceptances, and the same with Salisbury Central and North Canaan — all the schools benefit from having newer families move to the area.”

Unless the market slows, area real estate agents are likely to be put through their paces over the coming months, if not longer. Buyers, said Morris, have a sense of urgency.

“They are closing faster. Timing is critical — and the houses are much more turn-key. People want to get in and be safe,” and enjoy all the amenities of country living.

Goldspiel, like his peers in the business, is taking it all in stride. He has been spending endless hours on the road, racking up miles while showing properties, attending closings and fielding calls.

“I live in my car,” which is packed with food, water, masks, gloves and disinfectant.

“My passenger seat,” said Goldspiel, “is my COVID seat.”