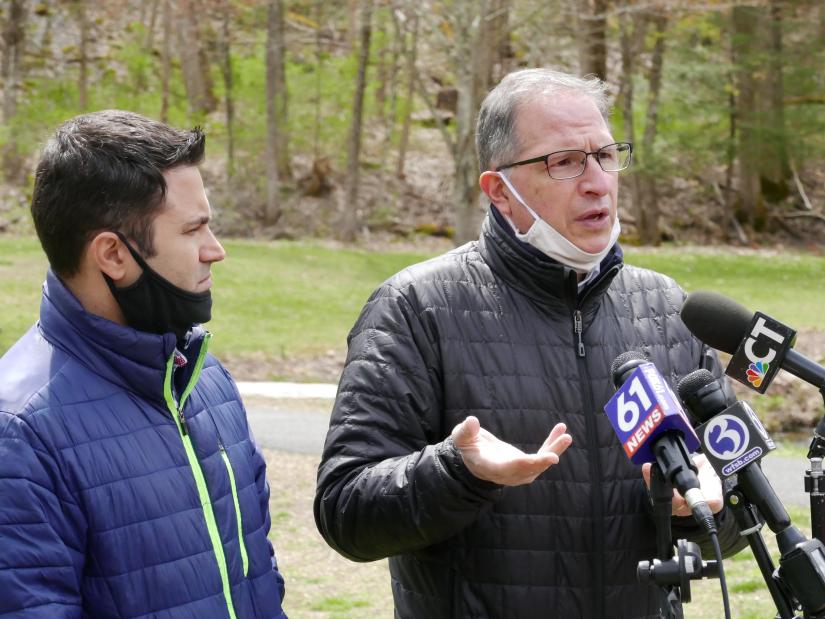 Brian Frudis, left, and Steve DiRienzo were interviewed by news crews about a possible tornado in Kent. Photo by Lans Christensen

The big winds from Hollywood and (possibly) a tornado or two

The Northwest Corner normally slips quietly under the radar, keeping its name out of the news when possible. But last week television news crews arrived in area towns, for very different reasons.

In Salisbury, a news crew was on hand to cover the filming of a movie on Main Street. Although the crew refused to give any information about why it was shooting at both the Salisbury General Store and The White Hart, several people said on social media that the project stars Katie Holmes.

In Kent, news crews came to cover the many trees and branches that were brought down by the explosive gusts that were part of the storm on Wednesday, April 21.

Photographer and Kent resident Lans Christensen reported that, “Three television stations came to the area on Thursday to report on the nature and results of Wednesday’s severe storms.

“First stop was Bull’s Bridge, where they interviewed Kent First Selectman Jean Speck about the effects in the Kent area.

“Hardest hit was the area just over the New York border in Amenia, where significant damage occurred.

“Then NBC Connecticut TV, Eyewitness News and Channel 8 News all went north to Kent Falls, where they interviewed Steve DiRienzo and Brian Frudis; both are meteorologists from the National Weather Service in Albany.

“They are in this area doing extensive mapping and research to determine if it was indeed tornadic in nature.

“DiRienzo said, ‘There were severe clashes of air masses’ that occurred Wednesday. Frudis added that ‘straight-line winds can be as strong and damaging as a tornado.’”

Both were continuing to investigate and couldn’t yet definitively say whether or not the storm was “tornadic.”

Meteorologist Christina Speciale from the National Weather Service confirmed that a tornado hit Amenia on Wednesday. It was categorized as an EF1 on the Enhanced Fujita Scale, which rates tornadoes from 0 to 5 based on wind speeds and damage; winds were estimated at 100 mph in Amenia, she said.

The tornado touched down near Powerhouse Road and Amenia Lake Road, starting at 2:49 p.m. and ending at 2:51 p.m. In the two minutes it was on the ground, the tornado traveled 0.6 miles. There was also large hail reported and high winds, though they didn’t last for long.

John Stefanopoulos, an owner of Four Brothers Pizza on Route 22 in Amenia, said the tornado damaged some outdoor furniture and the restaurant lost power for a few minutes when the power lines went down.

The Great Cape Baking Company, in the downtown Amenia space most recently occupied by Monte’s Local Kitchen & Tap Room, on Route 343, confirmed that part of the building’s roof came off because of the high winds. The roof got caught in nearby power lines, shutting off power to the area for a few hours.