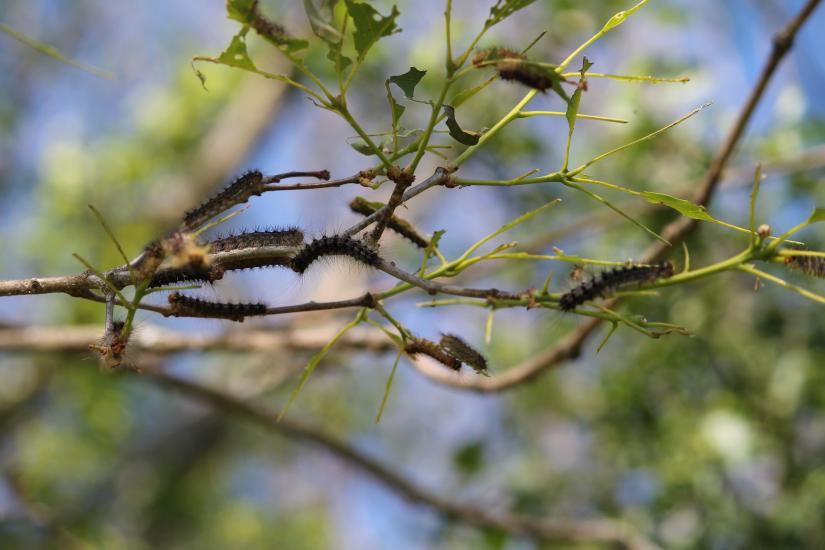 There is an infestation this year of gypsy moth caterpillars, which are eating all the leaves on every tree they can find (oaks are their favorite, but they will strip any tree that is available and has leaves). Photo by Kathy O’Flinn

The attack of the killer gypsy moth

Most years, we are inundated in summer with photos of bears. This year, my email inbox is full of photos of destructive, furry gypsy moth caterpillars. Several photos are dramatic before-and-afters, where a tree (usually an oak) is fully leafed one day, and completely stripped the next day.

The bad news is that it might already be too late to do anything about the infestation for this year (short of going out and squishing as many of the invaders as you can; this is non-scientific advice from a non-professional).

But the good news is that most trees are likely to leaf up again this season; and most trees will bounce back.

Tree experts who were questioned for this article largely referred back to an informational page from the Connecticut Agricultural Experiment Station, which can be found at www.portal.ct.gov/-/media/CAES/DOCUMENTS/Gypsy_Moth/Gypsy-Moth-Fact-Shee....

The short version of the more detailed information in the informational PDF is that the gypsy moth caterpillars have been so abundant this year because it was a dry winter and spring. There is normally a fungus that keeps the population in check; that fungus was less present this year, because it was too dry.

Those who’ve been here for a few years will recall that it’s been very dry for several years running now. And, therefore, there was also a gypsy moth epidemic in Connecticut in 2015-17.

It’s probably already too late to keep this year’s caterpillars from invading your trees (they prefer oaks but will infest other types as well, everything from hemlocks to blueberries). The caterpillars hatched in late April/early May. You might have seen the tan-colored egg masses all over the trunks of your trees; each of those masses can hatch 100 caterpillars.

In spring, it is possible to carefully remove the egg masses (and then completely destroy them, so there is no hatch).

Once they’ve hatched, the caterpillars will continue to feed on your trees until late June or early July. Then they generally disappear for two weeks and come back as moths. They only survive in moth form for six to 10 days — just long enough to mate and hatch more eggs, on pretty much any surface they can find. Those eggs will hatch next year in spring.

If you have a gypsy moth infestation, it seems logical to assume that you will have an abundance of egg masses on your property by late July. If you want to avoid another infestation next year, you will want to carefully scrape off and remove the egg masses and drown them in a container of soapy water. Dropping them onto the ground will not kill them.

For anything that involves a strategy more complex than scraping and soapy water, it is of course best to consult an expert, either a forester or an arborist. Unfortunately, as the state notes in its extensive explanation of gypsy moth behaviour, when there is an infestation such as the one we’re having this year, it can be extremely difficult to get an appointment with a tree expert.

In the meantime, it’s heartbreaking to watch the caterpillars destroy decades-old trees by eating all their leaves. Without leaves, trees can’t perform photosynthesis, which is as essential to them as breathing is to humans.

Healthy trees can usually survive one or more gypsy moth attacks, according to the Connecticut Agricultural Experiment Station. But older trees might not be able to make it.

In the Tri-state region, there is not exactly a shortage of trees. But many of the most beautiful, stately types have been under attack for nearly a century. This area used to be famous for its elm trees, which succumbed to Dutch Elm Disease in the 1930s and 1940s.

Another famous local tree was the chestnut, which was beautiful, had edible nuts and provided a particularly perfect, rot resistant, straight wood that was used for houses and all sorts of industry. The American chestnut was almost entirely wiped out by a roughly 40-year blight period in the first half of the 20th century.

More recently, the emerald ash borer has been the cause of death of ash trees all over the region.

Trees grow back, of course, A hybrid chestnut tree is being nurtured, with the hope of eventually repopulating forests; but it has taken decades to develop the new blight-resistant strain.

The same is true with elm trees. The remaining elm trees in the region are being cared for by arborists, foresters and North Canaan’s Tom Zetterstrom and the organization he founded, called Elm Watch.