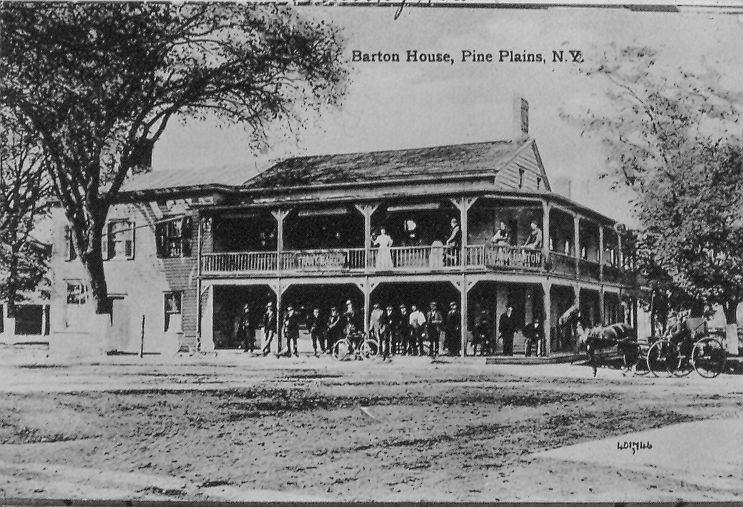 Taken some time after 1895, this photograph captures the Stissing House building’s past in the days when Frank Barton served as its proprietor. Photo courtesy little nine partners historical society

Stissing House closes its doors after 15 years of fine dining

PINE PLAINS — Having built a name for itself with its cozy tavern atmosphere, superb dining and thoughtful community endeavors, the Stissing House in Pine Plains has closed its doors after 15 years of business, though not before thanking its customers, friends and family for their support.

For those well versed in the rich history of Pine Plains, it’s no surprise that the Stissing House has a “spirited past” dating back to the 1700s, noted by local historians and on the restaurant’s website, www.stissinghouse.com. Co-owner Patricia Jean explained that the building has been continually operating in the town Pine Plains since 1782, either as a tavern or a boarding house. Unearthing the building’s roots, it also served as an inn, a restaurant and “bawdyhouse,” and held town meetings and other society events.

Moving forward in time, the Stissing House was owned for a few years by Christian Eisenbeiss before he approached Patricia and her husband, critically acclaimed chef Michel Jean, to see if they were interested in running it. It was around that time that the Jeans, who were living in Pine Plains, were in the process of selling their New York City restaurant, Provence, in Soho, and were looking for a local space to open a new restaurant.

Although they originally wanted something smaller, Patricia said it was such a beautiful building that they decided to take it over in 2005. With the pair in charge of the restaurant, Eisenbeiss continued to own the building as its landlord until his passing in April of 2017.

Patricia said they felt the building had been “Victorianized.” The couple wanted to make it more like a cozy tavern so they renovated the space and brought back the natural wood look, creating an aged stain look for the walls and filling the space with Hudson River paintings. Drawing from Michel’s French origins, Patricia explained they based the menu on the foundations of French cuisine before it evolved into a “mishmash of cuisine with some French” between the wood-burning oven that produced pizza pies and the wood-burning grill that served up hamburgers.

She spoke fondly of their loyal clientele in “a small town of 2,000 people” and making their restaurant a destination spot for visitors. Yet town residents and those from neighboring communities will remember the Stissing House and its owners for more than their delicious cuisine and warm hospitality, they will also think of them for their willingness to support those in need.

When the Miller family of Ancramdale lost two dairy barns and 46 cows when their farm caught fire in the fall of 2018, the Stissing House hosted a sold-out benefit to support the family. This past December, the restaurant teamed up with the Willow Roots food pantry to provide hot meals to local families during the Christmas season.

When asked how the town has changed in the years that she and Michel have been operating their restaurant, Patricia mused that more people have moved to the area and become more politically active and community oriented than they once were.

Though she decided not to go into the details regarding their decision to close, Patricia said the building has been in an estate situation since Eisenbeiss passed away. And while the pair tried to buy the building with a group, the group they hoped to buy with found someone else to whom they could sell the building.

As the duo close this memorable chapter in their lives, Patricia said hopefully they won’t be saying goodbye to Pine Plains; they are now looking into a new project. She said her husband wants to do another restaurant, but that they’ll start with a venue that can accommodate catering and maybe some outside dining until the COVID-19 pandemic is resolved.

“I just want to say it’s been a really wonderful experience in Pine Plains and I hope we can continue to be part of the community,” she said.