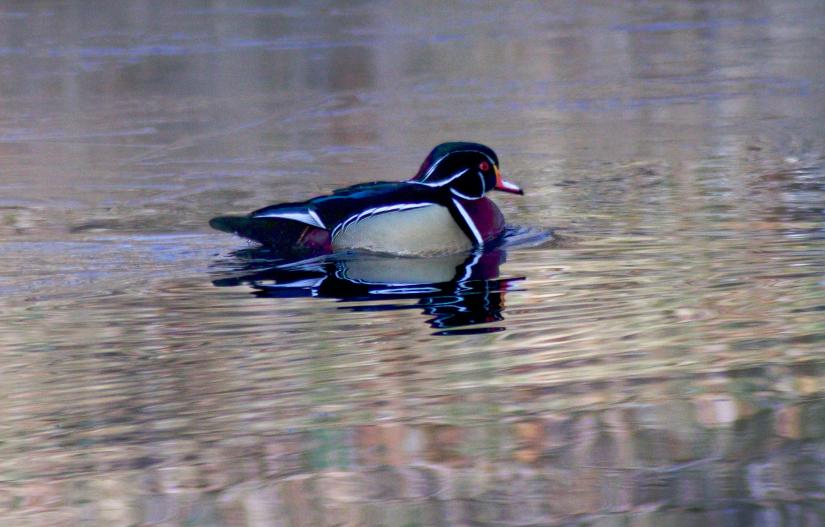 Migratory waterfowl are returning to the Northwest Corner, a herald of the arrival of spring weather. Look for wood ducks, such as this lone male. Photo by Michael Moschen

In a world turned upside down by COVID-19, the ducks return

Previews of spring have been unveiling themselves through the steady arrival of migratory waterfowl species, particularly ducks, that are moving northward toward Canada and Alaska to breed.

Diving ducks such as Common Mergansers and Ring-necked Ducks can be readily spotted on freshwater bodies in the area, though Ring-necked ducks tend to prefer more sheltered ponds or lakes that are bordered by forest. Look for either species in small or large groups.

Ring-necked Duck males have dark heads, necks and backs, with gray sides, while females are a more subtle mix of gray and brown.

Note that the ring on the neck of Ring-necked Ducks is almost never visible, but luckily their bills also have distinctive white “rings” at the base and the tip that differentiate the Ring-neck from the similar Lesser Scaup (also a northbound migrant) that has a solid-colored bill.

Various species of dabbling ducks are also moving north, with the brilliantly colored chestnut and emerald head of the male Green-winged Teal a delight to observe in marshes or shallow water bodies.

In addition to the migrants passing through, some resident ducks have arrived to breed here. Wood ducks are selecting mates and beginning to scout out nest sites in riparian tree cavities and nest boxes. You may have stumbled upon a pair along a pond’s edge and heard the distinctive “oowheak!” from the female as the pair frantically flew away. This species startles more easily than others, so approach with caution for closer observations if you don’t have binoculars.

Additionally, keep an eye out for the unmistakable male Hooded Mergansers, a resident diving duck, whose magnificent black and white crest captures the interest of both beginner birders and seasoned ones alike.

Now is an undoubtedly exciting time to brush up on your waterfowl identification or learn a new bird, so consider making time to go explore your nearby ponds, lakes or rivers!

Bethany Sheffer is the naturalist at Sharon Aubudon.