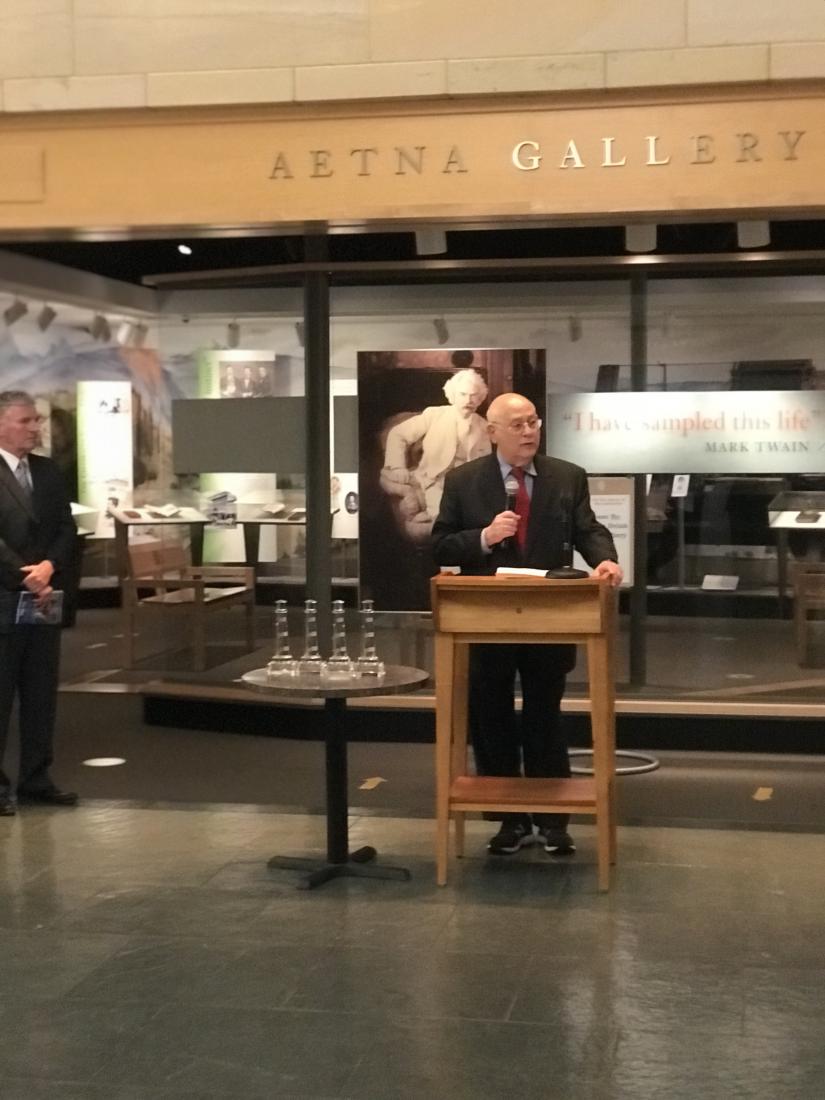 Above, Mitchell Pearlman spoke at the Mark Twain House on Thursday, Nov. 10. Photo by Janet Manko

Keeping government open to all of us

Now that the midterm elections have wrapped, at least in Connecticut and New York, it’s time for all those elected to think about governing. Sounds so simple, but it’s really not, is it? Especially in the current divided climate, it will take deep thought and commitment to public service to be effective in office now. Whether the successful candidates are new to the job of serving the electorate, or returning to the position, there should be basic tenets of American democracy that are foremost in their minds. At least we can hope that’s the case.

One such concept is that while elected officials belong to a specific party (unless they’re independent), they represent all their constituents and should serve all of them with equal respect and care. This has been a tough sell during the recent years of extreme polarization in American politics. We saw the other extreme when Donald Trump was president, when he was often clear that he favored states with his party’s control.

Knowing if the agenda for any elected official strays from ethical political discourse and behavior is key in making choices when one is casting a vote. The American people embraced that idea during the midterm elections, refusing to support the majority of Trump’s choices in races across the country. While some election deniers and conspiracy theorists have gained public office, it certainly was not the widely predicted “red wave” of Trump’s hand-picked leaders winning office.

Another one of those basic democratic ideals essential to good governance is maintaining transparency in all matters that must be open to the public. Open government does not happen automatically or easily, however. It takes vigilance on the part of those who believe in it to keep government accountable to those it serves. In New York state, the path to filing a Freedom of Information request can be found at www.ny.gov/programs/open-foil-ny, where there is a form that can be used for multiple Freedom of Information requests to different departments.

But the support of a full office of experts is significantly stronger in Connecticut, where the state’s Freedom of Information Commission has been in force since 1975. That is when the state’s Freedom of Information Act was instituted, beginning with the words: “The legislature finds and declares that secrecy in government is inherently inconsistent with a true democracy, that the people have a right to be fully informed of the action taken by public agencies in order that they may retain control over the instruments they have created ...”

On Nov. 10, at the Mark Twain House in Hartford, the first Mitchell W. Pearlman Awards were given to two public officials, a group of members of the public, and a journalist in honor of Pearlman, the first director of the  Freedom of Information Commission. He served from 1975 to 2005, and has remained active in the world of open government since his retirement. He currently is a lecturer in law and journalism at the University of Connecticut. For decades, he has acted as an open government consultant across the globe, as well as in the United States.

Pearlman’s effect on government transparency has made Connecticut a model to which states and nations can look to form their own laws controlling information. The public’s debt to him cannot be overstated. Thanks go to him, and all at the Freedom of Information Commission, and all the volunteers who work at the Connecticut Foundation for Open Government and the Connecticut Council on Freedom of Information. All these groups reinforce the state’s strength in keeping information available to all state residents.

For more, go to www.ctfog.org, and to www.portal.ct.gov/FOI. If you want government to function for you, it’s important to keep track of it and to know your rights as a citizen.