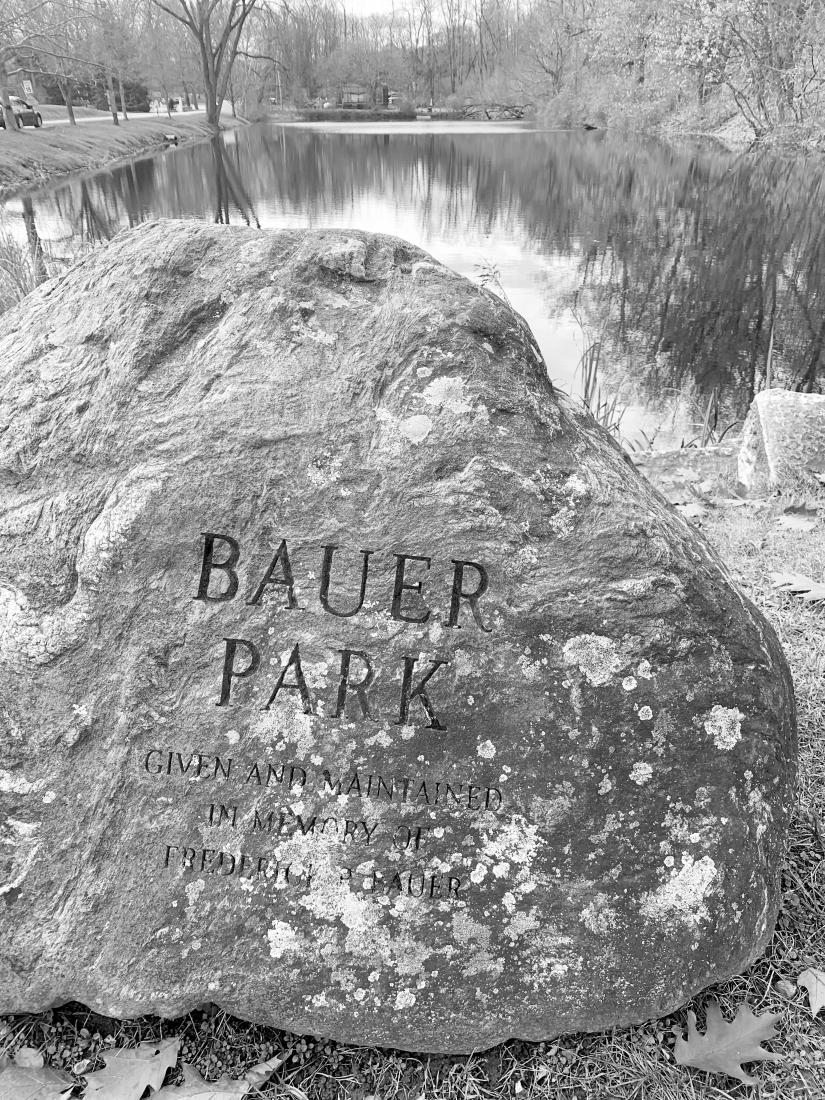 The true story behind Bauer Park, the fishing pond at the town Grove in Lakeville/Salisbury

Hidden Histories is a new column that highlights little-known stories, lives and places that contribute to the richness of our community, revealing sometimes surprising aspects of our shared local heritage.

Everyone in the town of Lakeville/Salisbury knows what a gem our town Grove is, but unless you live within walking distance, you might not be acquainted with the beauty of the little park that flanks its entrance at Factory Pond, or as neighbors call it, the Fishing Pond.

Bauer Park is a green haven for heron and other wildlife, and passersby, young and old, who seek a quiet place to sit and talk or check their screens. Two cedar benches provide seating amidst all-season gardens planted and cared for by the Lakeville Conservancy. Larger gatherings, like the men’s group who meets there in good weather, require BYOC (bring your own chair.)

Bauer Park was a gift to our town in 1947 by Frederick Bauer who also donated the historic railroad station, the land surrounding it, the pond and the former railroad right of way which now serves as the access road to the Town Grove. The Lakeville station had been an important stop on the Connecticut Western Railroad route between Millerton, N.Y.,  and Hartford, Conn. It was key to the town’s emergence as a thriving summer resort community and provided the Holley Manufacturing Company with ready access to a national market for its pocket-knives and other wares. The station was opened in 1871 and was still operating when the Bauers moved to town. Freight service didn’t end there until 1938. Now, it’s part of both the Local Historic District and National Register of Historic Places.

Bauer not only gifted the land, pond and depot, he donated a sizable fund to maintain them in perpetuity. Funds from the Bauer Fund were used in the 1950s to fix up the old station so that it housed the Salisbury Welfare Association and Public Health Nursing office, institutions which served our town for years.

When Frederick Bauer died in 1951, the front page of The Lakeville Journal lamented the passing of a “A Noted Lakeville Citizen” known for “generosity of both time and money to many local causes as well as to countless individuals who had need of his help.” And yet, many who benefit from his good works today, have never heard of him.

Frederick Bauer was born in 1888 in Germany and came to this country with his family when he was four years old. They settled in a farming community in (of all places) Nebraska. From there, he went to Cornell University’s Agricultural School where he met his wife Ruth Rodman who was getting her masters in botany — an unusual achievement for women in those days. They married and moved to New York where Frederick became an investment banker. But farming was in his blood. In 1935, they bought Larchmeadow Farm in Lakeville to which they retired a year later and became full-time producers of local beef. Besides raising a prize-winning herd of Hereford cattle, both Bauers were active in civic organizations. Frederick became a director of Salisbury Bank and Trust and they were both on the board of Salisbury Welfare Association, now Salisbury Family Services.

Eighteen years after Bauer’s death, a special Town Meeting was held to decide whether or not to allow the park he donated to become a parking lot. According to the June 19, 1969, Lakeville Journal “the meeting proved a long and frequently emotional one.” The Selectmen were reminded that Mr. Bauer had bought and donated the park to be used for recreation and that “if the wishes of donors are disregarded, no one would give anything to the town in the future.” Mrs. Bauer confirmed her late husband’s intention and the motion to prohibit parking in Bauer Park was “voted by a fair majority.”

According to our town’s 2020 financial report, the funds Bauer donated to maintain the park, depot and surrounds has grown to over $2M. Perhaps some of it could be used to refurbish the park’s stone marker so that its engraving is once again legible: Bauer Park Given and Maintained in Memory of Frederick Bauer.

Frederick Bauer’s legacy to the town isn’t only green space. For decades, the Bauer Foundation has provided thousands of dollars in college scholarship assistance to local high school students in Regional School District One. Information on how to apply can be found at http://www.bauerfundfoundation.org.

Helen Klein Ross lives in Lakeville. Her latest novel “The Latecomers” was inspired by the old governor’s mansion that she and her husband, Donald, restored in 2011. More local history can be found on her blog, www.bringingbackholleywood.com.