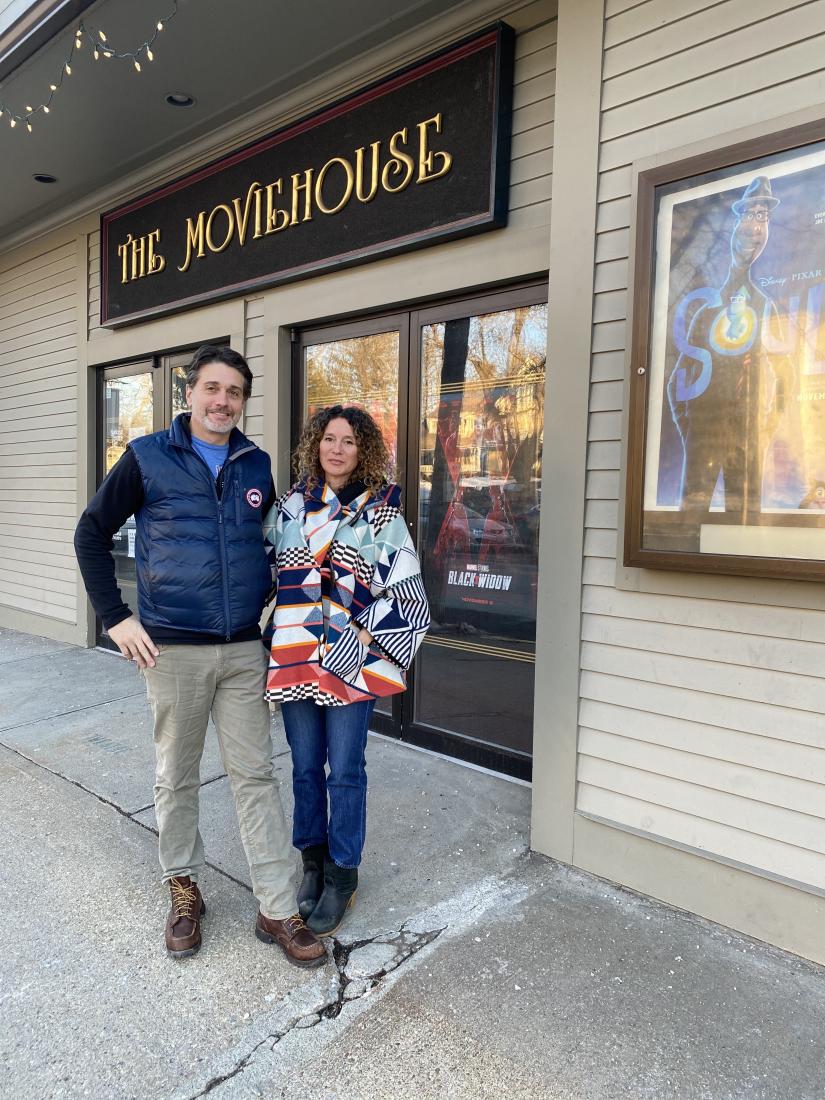 David Maltby and Chelsea Altman are the new owners of The Moviehouse in Millerton. Photo by Cynthia Hochswender

Continuity (and change) in store for Moviehouse

MILLERTON — Carol Sadlon is happy, relieved and of course sad that she has found new owners for The Moviehouse, the cinema that she opened in 1978 with her husband, Robert.

The theater has served the culture needs of residents in the Tri-state region with movies and streamed performances of opera, theater and dance.

Sadlon continued to run The Moviehouse on her own after her husband and partner died of brain cancer in 2019.

But the weight of running any business is heavy; and to run a theater during the COVID-19 quarantine was crushing. The doors were closed last March. Sadlon has continued to work hard to offer films and other online events to a loyal community but … it’s hard.

And so she decided last autumn that it was time to pass the torch to new owners, whom she hoped would bring new energy to a beloved cultural resource.

The theater was listed last November with  Select Sotheby’s Realty with an asking price of $1,195,000. Eleven potential purchasers surfaced quickly, most of them with roots in the arts, all of them clearly looking to continue and enhance the Moviehouse model.

Sadlon said she would have been pleased to sell to any of them.

But she is most pleased, of course, with the successful bidders, David Maltby and Chelsea Altman, who became the official owners of The Moviehouse two weeks ago on Friday, Feb. 19.

In the announcement of the sale (released on Thursday, Feb. 25), Sadlon said, “When I made the decision to find new leadership for The Moviehouse, I looked for people who shared our passion and enthusiasm for the cinema, art, and community.

“It was a heartwarming journey as 11 suitors stepped up wanting to take The Moviehouse forward.

“I feel confident that David and Chelsea are the right choices; they are brilliant, creative people, skilled and successful in their current endeavors, with deep-seated ties to the community and enthusiasm for the future of cinema arts.”

A lifelong link to The Moviehouse

Maltby and Altman were upbeat and lowkey when they turned up at the theater for an interview on Feb. 25. The theater was dark; there were still boxes of candy in the concession stand, relics from last spring. Who knew then that because of COVID-19 the theater would still be closed a year later.

We sat upstairs in the gallery area of the theater on the wire Bertoia-style chairs and talked about their past and The Moviehouse’s future.

David Maltby has been a part-time resident of Lakeville, Conn., since he was a child (he is now 52). He is the son of Barbara Maltby, a well-known presence in the area, in particular thanks to her work as medical ethicist for Sharon Hospital.

A less known side of her resume is the 20 years she spent working with Robert Redford, producing films including “A River Runs Through It” and “The American President.”

His father, Richard Maltby Jr., has been involved in various ways with some of the most famous musicals of the last century, including “Miss Saigon,” for which he was a co-lyricist.

Describing his own life and work, David Maltby (who now lives in Lakeville full time and has children in school here) said he has had several careers but is most recently the owner of a “boutique” real estate firm, the Empire Square Group. The company owns property in locations across the U.S.

With his family background in entertainment and his own experience in real estate, he is perhaps the perfect owner for The Moviehouse, able to carry on the legacy of the Sadlons from an artistic point of view but also able to understand the complexities of renovating and upgrading (and yes, adding an elevator to) a very old building on a very small lot in the center of a crowded village on the side of a road that is often rattled by the large trucks that pass by.

His partner in life and in this new venture is Chelsea Altman, 48. The couple has been together for seven years and they own a restaurant in Bushwick, N.Y., called Birdy’s.

Altman has opened about a half dozen restaurants and bars in Brooklyn on her own as well, following a career as an actress with parts on stage and in films.

While of course the dining and drinking part of owning restaurants is important to her, what Altman cares about most is creating the experience of An Evening Out, and building community ties.

She and Maltby want most of all to honor the history and traditions of The Moviehouse, with a mix of fine independent films, mainstream top titles and cultural events such as National Theater Productions and live broadcasts of opera.

Maltby has a built-in understanding of what The Moviehouse is; he’s been going to films there literally since it opened in May 1978. (His parents purchased their home here in 1971.)

But also, he says, and he’s kind of kidding but he really isn’t, “My mother, Barbara, is kind of the archetypal audience member, the ultimate Moviehouse customer,” a culturally sophisticated consumer of contemporary media with wide-ranging interests.

The Tri-state region is famous of course for having a preponderance of retirees. With the COVID-19 quarantine, however, there has been an influx of younger folks, some with families, some still searching for the right person to settle down with.

Altman and Maltby want to serve the existing customer base by continuing The Moviehouse traditions. Carol Sadlon will definitely work with them in the coming weeks, and the new owners anticipate they will turn to her for ongoing guidance.

“We are hoping that some of her magic will rub off on us,” Maltby said.

But they also want to expand out, make the theater more attractive to a younger audience and create more of an evening “experience.”

“We want to be able to offer people more of a night out,” Altman said.

They also plan to continue offering cinema “events,” calling on some of the many people in the Tri-state area who work in all parts of the entertainment industry.

The partners plan to expand the second floor of the theater and the cozy screening room, and perhaps open a bar there and offer space for events and private parties. Perhaps there will be screenings of film classics and cult favorites.

“Some movies,” they agree, “are more fun to watch with a group.”

At this point, the new owners hope that The Moviehouse will open to the public again in spring. The cinema originally opened on Memorial Day weekend in 1978, and Maltby feels there would be a nice synergy if all the renovations this year could be completed by the end of May.

But both Altman and Maltby are experienced at renovating and working with existing properties. They understand that there are often hidden surprises when you open the walls of historic structures; and they know that it can be a challenge to safely add an elevator.

“It’s an old building,” Altman said. “There’s a lot you need to do to make it a safely operating elevator.”

They are committed to figuring out how to make it work, and will be aided in the process by Maltby’s lifelong friend, the architect John Allee, whose office is nearby, in the village of Millerton.

“I would hate for someone not to be able to watch a movie because it’s on the second floor,” Maltby said.

Carol Sadlon stressed her “gratitude to the people who contributed to the elevator fund.

“I want people to know that the only reason we stopped raising money was that Robert got sick. We put it on pause. I had that money in a separate account and 100% of what was raised we turned over to David.”

The $45,000 that was raised was not enough money to get the elevator built, she said, but Maltby has vowed to get the project done.

Sadlon expressed confidence in the new generation of Moviehouse owners. She chose Maltby and Altman from among the several interested parties who had approached her.

“I’m grateful to have had the experience of meeting those people who wanted to acquire The Moviehouse and who understood the value of it to the community.”

She would not say what the sale price was for the theater, but indicated that she did not have to reduce the listing price.

Enthusiasm for the next generation

Of the choice of the new owners, she said, “I really like David and Chelsea. They have deep roots in this community. The Maltby family is well-known here. David grew up around people in the film business.

She confirmed that she will work with the new owners for at least a month, and “guide them through the Virtual Cinema  so that doesn’t have to go dark.

“But ultimately it’s going to be up to them to decide where they want to take it in terms of programming.”

While artistic decisions will evolve over time, one thing that Altman and Maltby promise will not change is their commitment to the theater and the community.

“We are not looking to ‘flip’ The Moviehouse,” Maltby said. “I’m not going anywhere for the rest of my days.

“We’re rooted here and I fully expect to own and operate this theater for at least the next 20 years.”