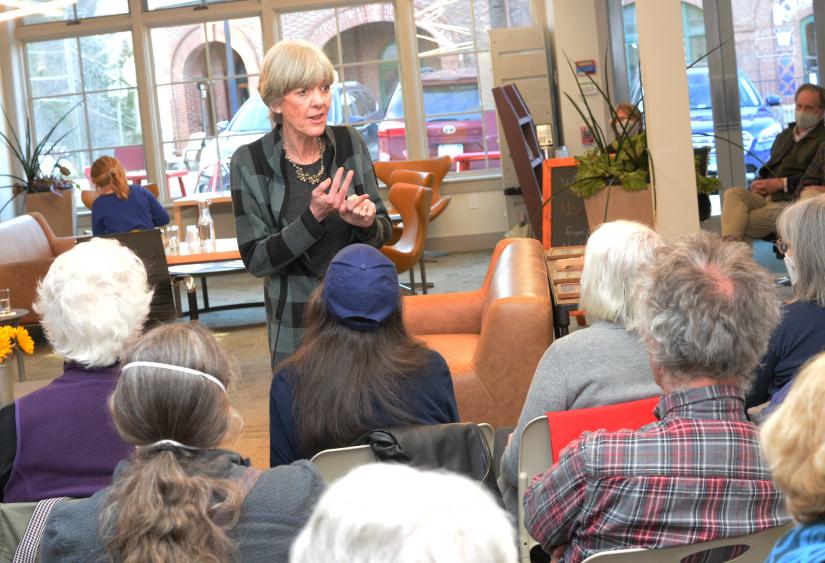 NORFOLK — Anne Garrels, a former National Public Radio correspondent and Norfolk resident, has formed a support organization for Ukraine with two other partners that has delivered nearly $500,000 worth of medical aid and other essential equipment to the war-ravaged country.

Garrels spoke to an audience of more than 50 about the campaign and the new organization, Assist-Ukraine.org,  at a public forum in the Norfolk Hub on Monday, April 11.

Her long career as an overseas correspondent provided her access to contacts that became invaluable in the effort to get high-end medical supplies, trauma kits, flak jackets and surveillance drones into Ukraine from border countries.

“The big issue now is that supplies are getting backed up in customs in surrounding countries,” she said. “So we’ve moved to hand carry.”

Her years overseas made it possible to find a translator and fixer in Warsaw to help get supplies to the border.

“I had contacts with key doctors in Lviv, Ukraine, who specified the kind of equipment needed.

Garrels said that an old friend of hers in Kyiv, Ukraine, has been distributing money coming from donations to local defense forces for gas, food and flak jackets.

Garrels was one of more than a dozen Western journalists who remained behind in Baghdad, Iraq, and reported live on the 2003 Iraq War. In 2006, when Garrels did a story about a young girl whose father had been murdered in sectarian violence, she got an email from a man named Art Davidson, who said he wanted to help the girl and her family.

“For 16 years, Art Davidson has been supporting that young girl, who was then 9,” Garrels said. The girl is now a graduate student at the University of Victoria in British Columbia, thanks to Davidson.

“What are we going to do?” Davidson asked Garrels this time. A friend of Davidson’s, Heinz Coordes, who had been a fighter pilot in Vietnam, also signed up to form the organization, along with Irka Tkaczuk, a Ukrainian American.

Garrels also is the author of “Putin Country: A Journey Into the Real Russia.”