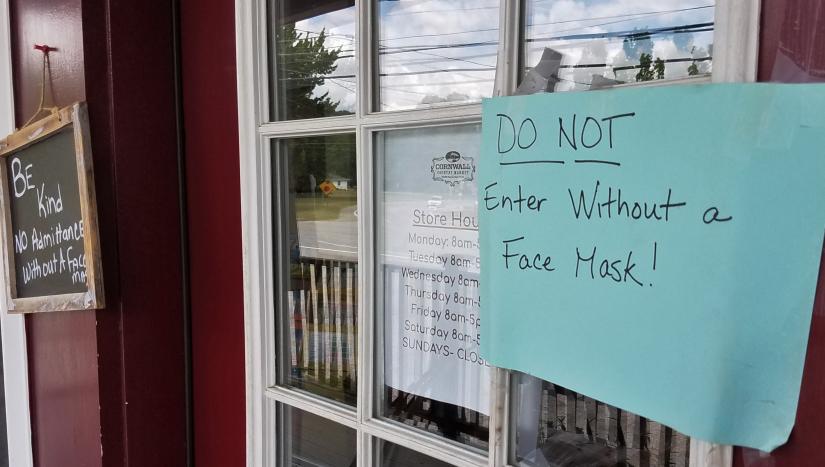 Two signs outside the Cornwall Country Market alert customers that they must wear masks inside the store. Photo by Debra A. Aleksinas

July 8, 2020
By
Debra A. Aleksinas
“That fragment of material that covers your nose and mouth is like a cut-price vaccine.” — Dr. James Shepherd, Sharon epidemiologist

A lone couple occupied a public bench along Kent’s Main Street on a recent Sunday morning as the town slowly came alive with people walking their dogs, dining outdoors or out for a drive.

Unlike most others around them who were sporting facial masks, this couple was bare-faced, and they intend to stay that way.

“It’s my choice, and I choose not to wear a mask. I don’t have to explain why to anybody,” said an adamant Justin Breecher, who was out enjoying a motorcycle ride with his companion through Litchfield County. “I keep my distance.”

As he spoke, a passerby who overheard the conversation paused and calmly uttered through his black face covering, “Not cool, dude,” and continued on his way.

The brief exchange, while hardly confrontational when compared to some explosive encounters nationwide between front-line workers and mask scofflaws, is indicative of the divisiveness that has erupted over mandatory mask requirements.

On April 20, in an effort to slow the spread of the coronavirus, Gov. Ned Lamont signed an executive order requiring everyone in Connecticut to cover their faces with masks or cloth coverings while out in public where social distancing cannot be maintained.

But the requirement is not a law, which means businesses like grocery and convenience stores, restaurants, bars and gyms are left to enforce those rules despite a lack of guidance from the state on how to do so.  Across Connecticut and the nation, masks have become a flash point in the virus culture wars as people resume going out in public while coronavirus cases continue to surge.

Some people choose to wear masks for their safety and the safety of people around them. Others say they feel it is a violation of public liberty, or that the virus poses no danger or that masks are unattractive or uncomfortable.

“Masks are hot, ugly and make you feel stupid. The elastic loop always gets stuck over the arm of your glasses when you remove them to wipe off the condensation and you look even more stupid. Plus they’re un-American,” said Sharon epidemiologist Dr. James Shepherd, an infectious disease consultant at Yale-New Haven Hospital.

Masks, said Shepherd, who has worn them for decades, are no one’s favorite item.

“Nonetheless,” he said, “that fragment of material that covers your nose and mouth is like a cut-price vaccine.”

And here’s why: “A seasonal flu vaccine doesn’t protect you from flu 100%. In fact it is only about 50% effective in a good year.”

But 50% is still better than nothing, and, Shepherd said, “If you do get infected it also reduces the likelihood of you passing the flu virus on to someone else.”

A mask, he said, does exactly the same for the coronavirus.

Masks also seem to have a “significant effect” on reducing the efficiency of viral transmission, they allow us to “open up” safely again, and communities that have adhered to mask wearing among other things seem to be much safer than communities that haven’t, said Shepherd.

“I don’t love wearing it,” she said referring to her fashionable bumble bee-themed mask. “Of course it’s uncomfortable. I look at it this way: Worst-case scenario is if I don’t wear it and somebody dies.

“That doesn’t seem like such a big sacrifice if I can keep people healthy,” said the Southbury, Conn., resident.

Pointing to a sign on the door of Kent Mobil advising customers to wear a mask, Diaz said she is also concerned about the burden resting on business owners to enforce mask policies that are a requirement rather than a law.

“It’s not something they signed up for when they opened their business. Many are also trying to deal with having just reopened after being shut down.”

‘I can’t enforce it’

Inside Kent Mobil, store manager Nee Maddumage said if a customer refuses to cover his or her face at his establishment, there is little he can do.

“I can’t judge. I don’t know if they have asthma or something. I can’t enforce it. The only thing I can say is ‘be supportive, wear a mask.’”

Maddumage estimated that about 98% of customers don masks, and that the scofflaws are few and far between.

“This community is so supportive,” he said, noting that several customers have donated large supplies of personal protective equipment (PPE) to store employees, including surgical masks and protective gloves, which he and his cashier were wearing.

At Stateline Pizza in North Canaan, owner Chris Christodoulou said when a customer comes into his restaurant bare-faced, he offers them a mask. Despite a notice on the front door announcing that masks are required, “If somebody doesn’t wear one, I can’t be the police, too, especially if it is a long-time customer. I have so many other things to worry about, and the rule is not law, so it’s difficult to enforce.”

Bob LaBonne Jr., owner of LaBonne’s Market in Salisbury (with stores in Watertown, Prospect and Woodbury, Conn., as well), has enough on his hands trying to keep his employees and customers safe from COVID-19, so he has directed his employees not to confront mask-less customers for fear of triggering a confrontation.

“In the last three months we’ve banned more customers than in the last three years,” said LaBonne. Employees have been subject to “f-bombs,” rude behavior, refusal to wear masks or to have their temperature taken before entering the store, which is the store policy.

“I don’t engage with them. I want to be respectful.” But respectful only goes so far.

“We had one instance where we had to call the police,” said LaBonne, referring to a customer, a landscaper, in his 30s, who was shouting obscenities and refused to don a mask.

“He gave everybody a hard time” because he was not allowed to enter the store, said LaBonne.  “I told him he was on private property and it was our choice if we chose to make [mask wearing] mandatory.” Not wanting to cause a disturbance, workers waited until the customer left and then summoned police. “They warned him not to come back,” said the store owner.

LaBonne, who sits on the reopening study committee for the Region One School District, is a staunch believer in the value of face masks in slowing the spread of the coronavirus.

On a recent committee conference call, he said, a physician pointed to a case in Missouri where two hairdressers who did not know they were COVID-19 positive potentially exposed 140 customers and six coworkers to the virus.

Face masks, said LaBonne, were credited with preventing transmission from that exposure.

The grocery chain owner has a message for anti-maskers: “One of my best friends spent 90 days at Yale,” fighting the coronavirus, said LaBonne. “For three crucial days, in the middle of it, he told me, ‘My only job was to breathe.’”

“In the end, when all of this is said and done,” added LaBonne, “we are all going to be judged by our actions.”