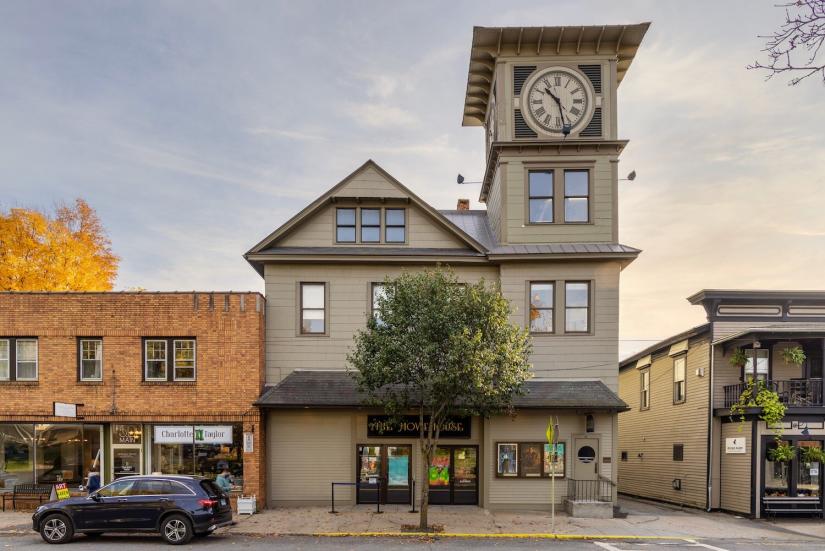 Carol Sadlon feels upbeat about the future of The Moviehouse on Main Street in Millerton. Photo by Alon Koppel

The passing of the baton at The Moviehouse

MILLERTON — The first and most important thing is that Carol Sadlon, owner of Millerton’s The Moviehouse, is fine! Following the announcement on Nov. 6 that she is looking to pass the baton to new owners she is feeling upbeat and optimistic.

Sadlon reflected in an interview last week that The Moviehouse has always served as a community gathering place.

“It’s had its ups and downs over the years but has always served as an anchor in the village.”

The Sadlons did more than just restore the beauty of the building; they were also able to successfully turn the theater into a thriving center for the cinema arts. The first thing was the decision to name it The Moviehouse —a name deceptive in its simplicity.

“Robert was a corporate identity designer,” Sadlon said, speaking of her late husband and business partner. “He wanted to give the theater a strong and iconic identity and the name ‘The Moviehouse’ kept sticking in our minds.

“Robert designed the logo himself and even had the letters of the sign in front of the building hand carved. Over the years, The Moviehouse has become ingrained in everyone’s mind as a name that has become synonymous with the arts in our region.”

As they buffed and polished the old theater, Robert and Carol also helped with efforts to upgrade and beautify the entire center of Millerton, earning the admiration and loyalty of their neighbors in town and in the area at large. You could go so far as to say that the Sadlons (among other notable business owners) created modern Millerton and helped to get the Main Street Historic District registered on the National Register of Historic Places.

A place to discuss ideas

Once the downstairs portion of the theater was functioning, the couple turned their attention to the upstairs.

“Robert and I were passionate about the extraordinary and wonderful foreign and independent films that were available for theaters at that time but were hard to find outside of New York City. In the ballroom space, we created the upstairs theater with a stage to host post-screening discussions and specifically to show these films.

“A café and art gallery, rounded out the space, providing an environment where people could relax, enjoy a cappuccino and discuss ideas and the films they had seen.”

Exhibitions of visual art rotated regularly in the space and featured regional artists. Opening receptions were hosted in the cafe.

Programming was designed to include something for everyone, with first-run films and blockbusters and children’s movies showing alongside independent films, documentaries and art films.

The FilmWorks Forum was created in 1997 to bring inspiring, socially relevant films with post-screening discussions free to local audiences and has become one of the mainstays of The Moviehouse’s offerings.

When the exhibition business shifted from analog film to digital in the early 2010s, the Sadlons made a substantial financial commitment to convert the theater so they could bring the latest technology to their audience.

The Sadlons understood that, with the conversion to digital, they could bring in live programming from anywhere on the globe through state-of-the-art satellite systems.

This enabled The Moviehouse to present live-streamed and captured live productions from the Metropolitan Opera in New York City, the Bolshoi Ballet in Moscow, the National Theatre in London and more. Filmmakers from all over the world were beamed in to discuss their work and answer audience questions, along with the many film professionals who live in the Tri-State region, elevating The Moviehouse into a world-class arts center.

“The Moviehouse became one of the first Event Cinemas, not limited to only showing movies,” Sadlon said. “It was a joy for us and the audience.”

Once the conversion to digital was done, she said, “The only aspect of programming we were missing were the smaller independent and international films and documentaries, that were totally amazing but that didn’t have wide distribution. As a way to show these films, we created the Screening Room —a 40-seat intimate theater that also served as a space for exhibition openings and a rental space for events and lectures.”

Change is the constant

The COVID-19 pandemic shut down theaters across the country, including New York State, which was the last state to allow theaters to reopen.

“As a way to remain connected with our audience during the pandemic we have been offering curated independent films and documentaries through our ‘Virtual Cinema,’” Sadlon said. “These films are only available through independent art house theaters. Fans can purchase these films through The Moviehouse website to watch at home.”

Sadlon expects the virtual landscape to remain after reopening as a new audience outreach vehicle.

When asked about the challenges of continuing to run The Moviehouse without her life partner Robert, who passed away from cancer just 18 months ago, Carol replied, “Robert was very much a part of The Moviehouse; we were a team. Without him, the many responsibilities, and challenges of running a theater have fallen on my shoulders. The burden of these tasks increased after the quarantine began and we had to furlough our employees.”

The property and business is now being offered for sale through the Lillie K Team at Select Sotheby’s Realty, headed by listing brokers Raj Kumar and Annabel Taylor, with a listing price of $1,195,000. Sadlon feels that The Moviehouse is in especially good hands with Kumar, who loves cinema and fully appreciates what The Moviehouse means to the community.

“There has been tremendous buzz and a lot of inquiries from people I know would be able to take this to the next level,” Sadlon said.

“Robert and I bought it at a challenging time in its history, because of our passion for cinema, preservation, art and architecture and with the intention of bringing people together. I really hope to find new owners who feel the same way.

“Nothing stays the same in life,” she said philosophically. “This was a hard decision, but now I am feeling very excited about the possibilities.”

The show will go on

While she misses the crowds and the fun of being at The Moviehouse, Sadlon looks forward to seeing what the next owners will do.

“This theater has been part of the community for 105 years. We were the stewards for 42 years and now other talented, creative people will continue.”

Helping her through the process as well, she said, are the calls, letters and emails she has received since making the announcement.

“So many people have reached out to me. I know people really care. It motivates us to work hard to find the right buyer. This is an extraordinary audience who are really engaged. We are so lucky to have them.”

Until a new buyer is found, The Moviehouse will continue to offer Virtual Cinema and other special online events. To find out what’s going on and what films are available each week, sign up to receive their weekly newsletters at www.themoviehouse.net.