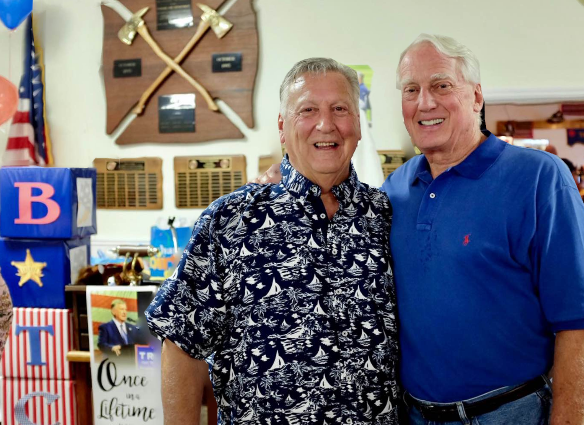 Dutchess County Sheriff Adrian “Butch” Anderson, left, is pictured above with the president’s brother, Robert Trump, who passed away on Aug. 15. Anderson said, “Whenever I asked [Robert] for his help with a  charity event or a child in need, he’d say, ‘How can I help?’” Photo submitted

The passing of the president’s brother: Robert Trump always asked, ‘How can I help?’

MILLBROOK — Sometimes people pass quietly through the lives of others, and while they are loved and cared for, their impact is noticed most after they are gone and missed. Gentle people have a tendency to stand aside, very often happy to let others take the limelight, yet their presence is keenly felt. The late Robert Trump, the brother of President Donald Trump, who died on Aug. 15 at the age of 71, was one such person.

For much of his life, Robert Trump was in the limelight, involved in big business, married for 25 years to socialite Blair Trump, and very visible  in the charitable and social circles of New York. Yet he never seemed to crave the exposure, and when he moved to Millbrook in 2013, he became just another hobby farmer, a neighbor everyone appeared to love, a person with a big heart who gave time, energy and money to local charities — especially those that helped children and animals, two things close to his heart.

Trump was a familiar sight in the community, driving his pickup truck, wearing his ever-present plaid shirt.

As one friend said, “You’d be more likely to see Robert in Stewart’s Shop or at the Millbrook Diner as you would in a fancy restaurant or at the country club.”

He and his new wife, Anne Marie (Pallan), whom he married in March 2020 after many years of being together, entertained their family, her children and grandchildren and their friends often. The majority of events they attended were in support of various local charities.

Anne Marie was the co-owner of the popular Monte’s Local Kitchen & Tap Room in Amenia, which closed last month due to the coronavirus pandemic; the couple was known to treat customers like friends, visiting each table, talking to everyone and becoming fast friends with customers. Monte’s was a frequent scene for many charity events.

One charity Trump was involved with was Angels of Light, which makes Christmas wishes come true for local terminally ill children and their families.

“With Robert, it was always about the greater good,” she said. “He was humble and kind.”

Decker’s family had dinner with Trump shortly before he died. She said she’ll miss visiting with him and his wife, and working on good causes together. “He was smart, funny and he had a heart of gold.”

Deanna Mancuso is the founder of Lucky Orphans Horse Rescue in Dover Plains, which often benefited from Trump’s generosity; she remembered words of wisdom that he shared with her.

“Be impeccable with your word. If you say you’re going to do something, do it and do it kindly. Always be kind,”  Mancuso said Trump advised her. She said she struggled when she learned of his death. “Today was one of those days I wasn’t sure how I’d get through. This morning I was still sobbing after hearing the news of Robert. As the kids kept showing up and the horses needed tending, my grief had to be met with responsibility. That is one of the greatest lessons I learned from Mr. Trump.”

Danielle Mollica-Whitely and her son, Dominick, were great fans of Trump as well. She remembers fondly the time when he took her young son aside at an Angels of Light Christmas event at Monte’s. He read him a book the Monte family wrote about its dog, named “Monte,” and gave him a stuffed animal modeled after the mutt. Dominick looked up to him fondly and slept with the toy puppy for months, said his mom, who so appreciated that Trump took the time to spend a moment with a small boy “that would stay with him forever.”

“We were very good friends, and in fact neighbors, living just a few towns apart, said Anderson. “He was a casually elegant man with a great love of life and family. He loved his dogs, horses, enjoyed heavy equipment and most importantly the relationship he shared for all these years with Ann Marie, his wife, and now the grandchildren.”

As with so many other friends and neighbors, Anderson was touched by Trump’s generosity and community spirit.

“He was a wonderfully, engaging individual and whenever I called upon him to assist me with a charity or children in need of assistance, his response was always, ‘What can I do to help?’” said the sheriff.